The review system says that this answer should be deleted, when formally full answer is given:

Given link is also healthy: it points to another Stack Overflow psot how to detect language spoken in google cloud platform machine learning speech api

Is it really so obvious case to be used in review audit to check the reviewer's focus? 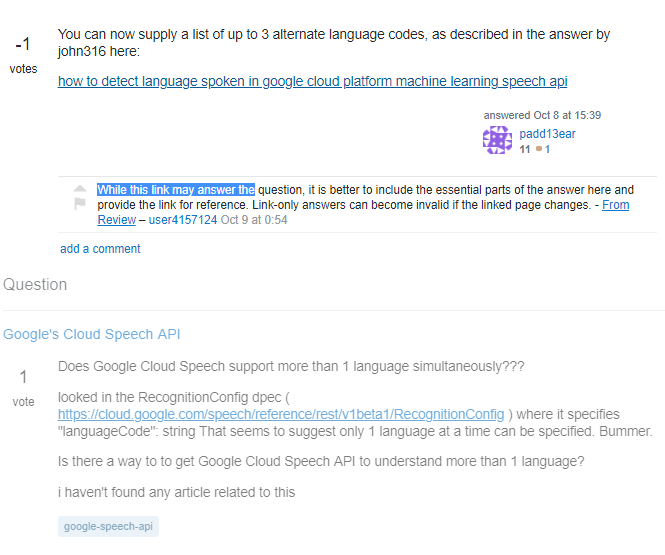 Only with the narrowest intepretation of the question you can accept that "Yes, you can use up to three" is a valid answer.

Despite the question being awkwardly written, it's pretty clear that the questioner want's more than a "yes/no" answer, but that actually wants to use more than one language with the API.

The answerer of the post your reviewed realized that, and pointed to a post with a answer to the problem at hand.

An answer like that does not look ok in my book. In my opinion the audit is perfectly valid, and you chose poorly when clicked on "No action needed".

The fact that the audit wasn't "obvious enough" (according to you), doesn't make it a bad audit. It just means that you need to give reviews a bit more thought and attention.

I think the audit is a pretty obvious one, but if one were uncertain in any way then opening the question to check the other answers to the question would have been advisable (that is something particulary useful in the late answer queue).

There are two options here:

The latter will be much more productive

Well, that answer is clearly link-only, even if it points to another question/answer in Stack Overflow. The text of the answer says what can you do but not how can you do it (note that the OP also asks if there is a way of to support more that one language).

Maybe padd13bear didn't want to attribute the solution to himself/herself, but in that case the best option (or at least what I do in that cases) is quote the relevant part of the question/blog post/article where you found the solution and then include a link to it for attribution and further reading.

26
Failed and banned for user who answered the question correctly?
-33
"too personal" phrases in replies. Does this style of discussion allowed in Meta?