Is it wise to attribute person X's question edits to person Y? 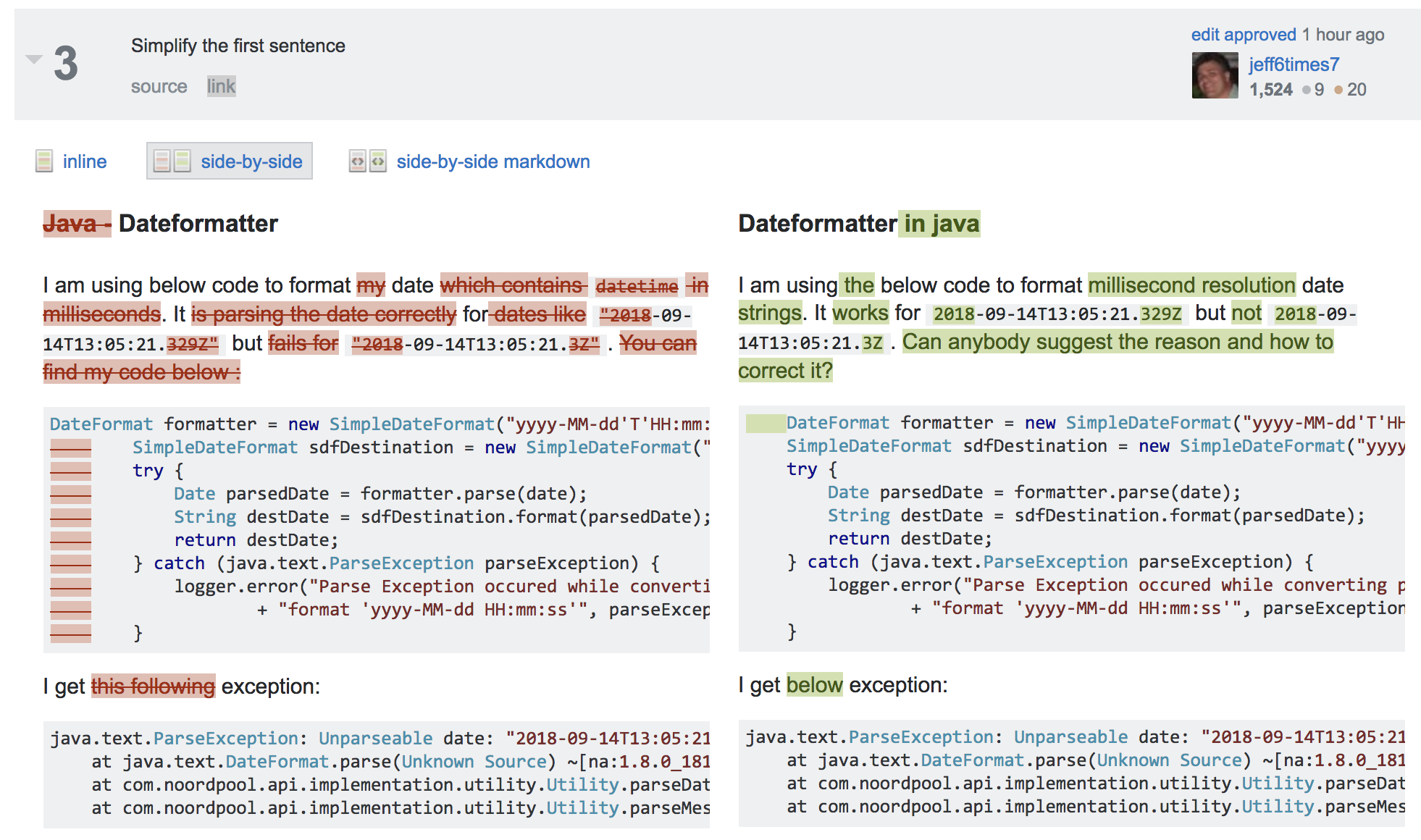 This is the question and this is its revision history.

All I did in my edit, #3, is edit the first sentence. It seems obvious to me that my edits were combined with those that preceded it. I say "preceded" because as soon as I finished my edit, I saw an "edited" user whose edit is now no longer in the list of edits.

Is it wise to attribute someone else's edits to me?

What if their edits were incongruous to me?

What if their edits were awesome and they get no credit (forget reputation for the moment) and I get it all?

After reading ryanyuyu's answer, I have to amend my question (conversing about merging in the comments might be more confusing than merging itself).

The previous edit is no longer part of the history and I'm to blame for making edits I didn't make. Isn't that a bug? Wouldn't it have been better for my edit to be interposed so I could have an opportunity to review the previous edit and then complete my edit or toss it?

Alternatively, if edits are recorded in a manner that makes viewing less resource intensive, what if a rejected edit causes the edit history to be recalculated so that my edit would have been compared to the remaining prior edit?

A strategy other than merging edits (or rejecting less-substantiative in favor of substantiative) will ultimately depend on implementing some form of mutual exclusion, which is .. a major headache to contemplate for a case that doesn't really happen all that often. At some point a post will have to lock so revisions 'back up' against each other, so they can then be applied in sequence, which gets super messy, and doesn't automatically favor the beefier edit.

While one could argue the virtues of lock-free methods that would indeed be practical in this sort of setting, finding them is going to take a tremendous amount of work, and the bugs we encounter along the way are going to be crazy frustrating for everyone involved.

It's not optimal, I agree, but as you can see folks can see that you're not entirely 'to blame' :) It's just too rare to re-think from the ground up, which is what we'd need to do.

I think this is actually just a simple case where both you and another user tried to edit the same post at the same time. Basically a merge issue. Looking at the diff for your edit, it seems to mainly undo other improvements from the second edit in addition to your edit to improve the opening paragraph.

This is what probably happened:

Normally, this kind of conflict ends with the second edit suggestion being rejected (since it often undoes a lot of improvements from the first one). But in this case, the first suggestion wasn't great, and undoing its "improvements" actually looks ok which allowed your outdated suggestion to be approved.

Like the other answers note, what happened here was almost certainly an edit conflict. Specifically, from the timeline of that question, we can reconstruct the following likely sequence of events:

At this point, there are three versions of the question stored in the database, in this order:

Since the revision history just shows the difference between consecutive versions, the resulting history view looks the same as if you'd deliberately undone User X's edits before making your own. But to anyone familiar with how the revision history works, the timestamps and the content of the edits make it pretty clear what actually happened.

Now, the natural followup question is whether this should have been possible.

Arguably, it shouldn't, and it would be technically quite easy to prevent this: just have the software record the timestamp and/or the internal ID of the version being edited in a hidden field on the edit form, and have it check that it's still the latest version when the edit is submitted. If it's not, show both versions to the editor and tell them to merge them by hand (or even offer some kind of an automatic merge option, like you get when merging changes in git / hg / svn / whatever). But unfortunately, the Stack Exchange software does not yet include such a feature.

It does, however, provide several other features that try to reduce the likelihood of such edit conflicts. In particular, I believe you should have seen a notice pop up above the edit box when User X's edit was accepted, stating that the question has been edited by someone else. Of course, there are several possible reasons (like spotty Internet connectivity) why that might not have worked as intended, or you might have simply missed the notification.

Also, if you had tried to start editing, or to submit your edit, after User X had submitted their edit suggestion but before it was approved, then I believe that you would have received an error saying that a post can only have one pending edit suggestion at a time. Of course, in this case, the time window between User X's edit being submitted and it being approved was only 35 seconds, so it all came and went while you were still happily making your own edits.

In any case, if you notice something like this happening, the best way to handle it is simply to look at both edited versions, see if there's a way to combine the best parts of each into something that's even better, and then submit that as an edit with a comment like "merging mine and User X's simultaneous edits to resolve edit conflict". Besides improving the post, that should also serve to clarify the situation for anyone looking at the revision history later.

I think the fact your edit got accepted is an issue - It makes two parts ambiguous when they originally weren't (using only "it works" and referring to "millisecond resolution") and lowers the English quality throughout (For example the bad usage of the word "below" and reversal of title by adding more words 'as a simplification'). It absolutely should have got a flat reject as "No Improvement Whatsoever".

However, what seems to have happened is that another user was actively editing at the same time as you. As the OP is a new user they have just accepted every suggestion and the system just shows a merged view when viewing edit history (as explained by Ilmari Karonen.

You do not have to worry though, most people who cared would look at the history and understand what has happened, so you would not be 'blamed' for anything, the most that would happen is a rollback

Not the answer you're looking for? Browse other questions tagged bug edits suggested-edits revision-history .

35
Should we be able to flag suggested edits?
52
Why was the closing of this question so unusual?
2
Is there a way to prevent another user from editing your question if you disagree with their edits?
13
Is it spam to insert your own link into an answer to replace a defunct one?