What mistake did I make with this edit?

Yesterday I tried to edit a question and my edit got rejected even though I thought it was valid. The edit in question: https://stackoverflow.com/review/suggested-edits/20686439

I understand that the question is overly simple and therefore maybe shouldn't have been edited or that I might have overlooked some issues that also required my attention due to my not-so-perfect English skills, however the reason for the rejection I got is pretty vague and it doesn't help me understand what was the problem. 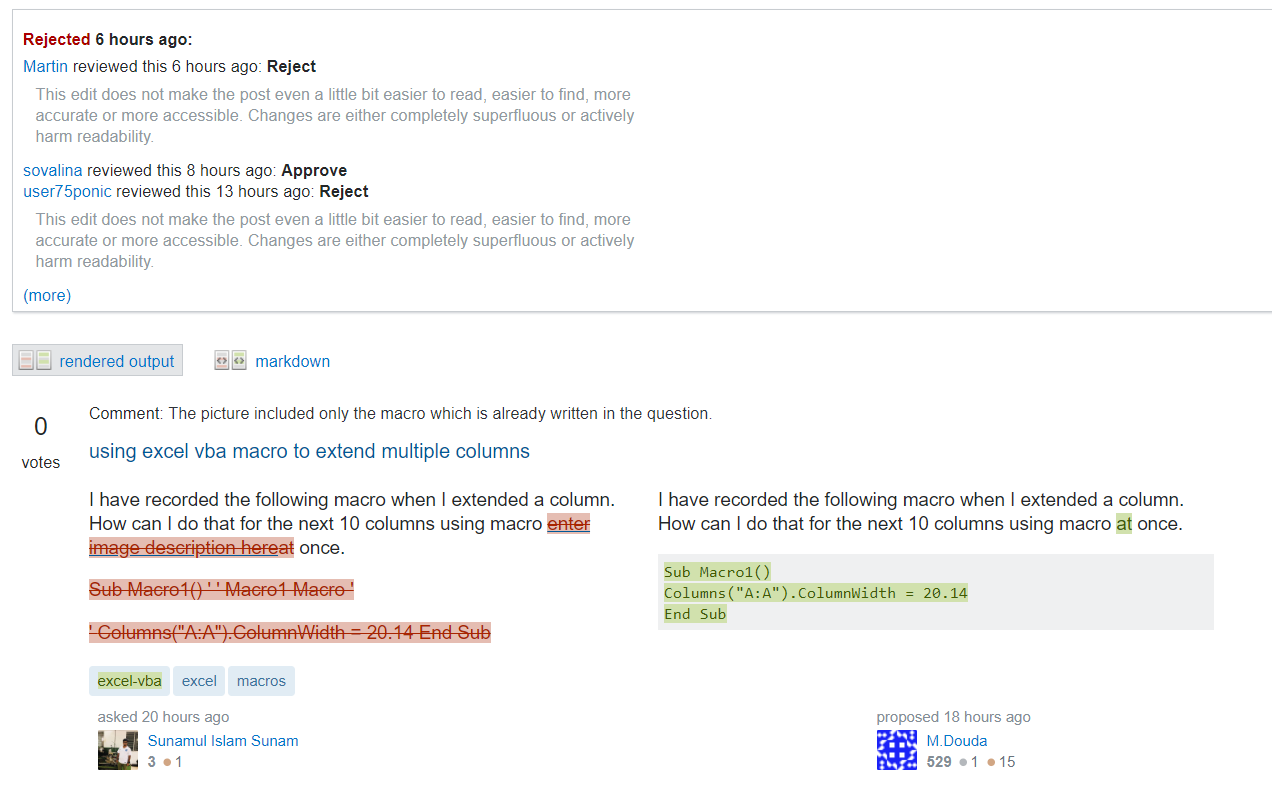 Note that the picture that I've decided to erase in my edit includes only the code that's already present in the question and nothing else.

I don't want to damage the site by misunderstanding the rules and I'd like to do things correctly so what did I do wrong?

I don't know if I'd have rejected that, but a couple of remarks:

You haven't indented the code, while the original code was indented, just not formatted.

You've added the excel-vba tag, while not adding the vba tag. Per this you should tag them both, until they're merged.

Especially that second one could be grounds for rejecting the edit, as reviewers might not be able to asses the importance of these code comments. Keep in mind that reviewers might not have VBA knowledge at all, and think you've just cut out a piece of the code.

Those who review edits are supposed to follow the rough guideline: if the edit improves the post and does not add new problems, it should be accepted.

Comments on every detail:

Overall your edit leaves the post in much better shape than it was before, the code formatting, getting rid of the pic and adding a relevant tag are substantial improvements, each on its own reason enough to approve an edit.

So this edit should have been approved, but I can see why some reviewers might reject it because of the removed comments and indention.

In addition to that noted by Erik, you also failed to deal with the macros tag which should have been removed. There was some capitalisation that could have been added to the title.

The edit could have been rejected by some reviewers as incomplete, as you are supposed to fix all the faults when making an edit. (Just suggesting further possible reasons)

I didn't review this, but FWIW if I had - as an Office VBA professional I would probably have rejected it as not an improvement because

Probably, I'd have gone to the question and voted to close. Then I'd have clicked "Reject and Edit" to remove the macros tag to get it out of that list. Those are the most important things to have done. Depending on how I was feeling, I might have formatted the macro code, but not necessarily.

145
Merging the [excel-vba] into [vba] - speak now, or forever hold your peace

2
Could someone please tell me why my wiki tag edit was rejected?
1
Was my edit useful? How does it "deviate" the original intent?
14
Suggested edit rejected, I am struggling to understand what I did wrong
2
Why did this non compiling code edit got rejected?
30
Why was this edit rejected for wildly different reasons?
31
Should I have heavily edited another user's closed post for language/grammar issues?
14
Were my actions with this suggested edit sufficient?