Should we rethink flags?

Our current set of flags for questions is as follows: 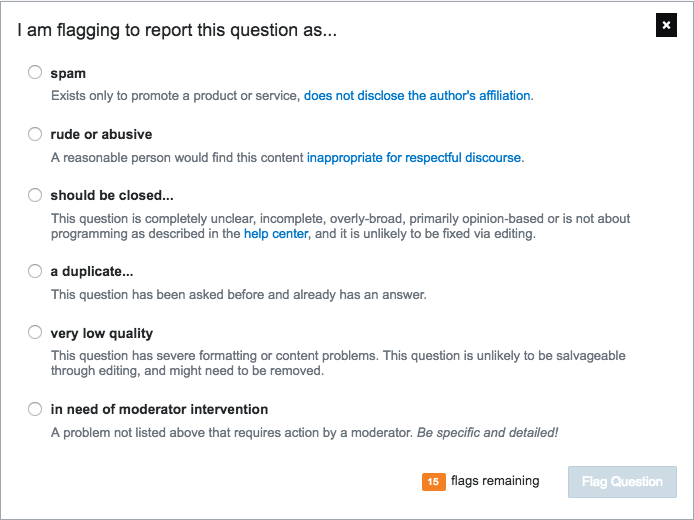 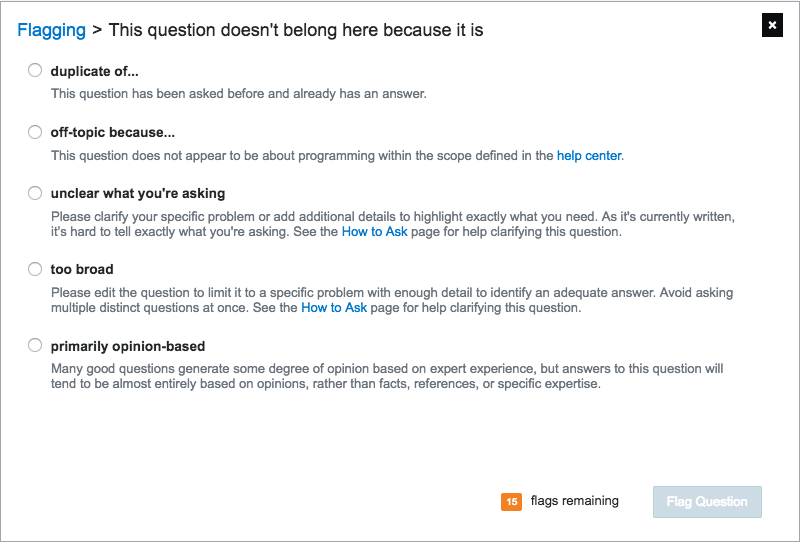 And I am often confused as to which one to use.

For example a post provides no code and asks for us to write it for them. Do you flag as 'off-topic -> asking for debugging help', 'unclear' or 'too broad'?

It is not just this, I find this often.

I think it should be made more obvious which flag to use in most cases, either by removing/adding flags, or just changing the description, or both.

Maybe some wordsmithing is warranted, but I don't normally find an issue.

To use your example:

The same is true of edits. I use "no improvement whatsoever" as an objective neutral party coming into the question. If I don't feel like the question reads better or is made clearer with the improvements that were made, then I usually reject with that reason. If it seems like their edit was putting words in the author's mouth, I usually go wth "clearly conflicts with author's intent".

Are we going to overhaul it? Maybe .. probably .. a little? What's becoming increasingly clear is our lack of breadth in UX research is a pain point, especially on stuff that was bolted together on top of stuff that got bolted together over the years. But we can't do anything until we get better at research, and fortunately we now have that kind of talent at the company and actively working on it. But saying "This feels weird to use" is good signal to help guide those efforts.

From a UX perspective, the flag dialogs are a mess. Now, admitting that doesn't automatically preclude them from working for the majority of touches and uses, it just admits that they just feel off, even though attempts at describing what could be improved fail to allude to more than a trivial amount of net benefit.

I think we're going to need to eventually break duplication out into its own workflow, as having that opens up some more possibilities for much needed attention in that department. I also think we should be treating spam and abuse separately, and more.

The problem (and part of the reason why you might see some disagreement with the proposal) is, it makes pretty clear sense to almost everyone that's going to read this, mostly because quite a few of us were around to watch it evolve from a terse, humble single modal dialog. Getting more outsider perspectives and data (as in "please read this list of options and tell us what you understand them to mean" is something we're getting better at doing, some of the user interviews we have are beyond enlightening, stuff you'd never think was ambiguous can be broadly misunderstood. We're ramping this research up as we dive deeper into exclusion analysis; it's a pretty deep rabbit hole.

So, in a technical sense, I agree that we should consistently think about ways to improve (and possibly break up) much of the functionality there - as in we should always be doing research and looking for opportunities. But we definitely can't overhaul it without pretty clear goals that can be tested, and a plan.

But in a broader sense, what we're essentially saying here is that we should agree that we'll eventually agree on some improvements, and we've had lots of discussions about it which many here stilll easily recall, so that outside perspective is pretty critical since we're becoming a bit of an echo chamber when it comes to making strides there.

We'll share what we learn, and then we can (together) try to bridge the dissonance between what we want to say in UX writing, and what people not actively involved in vetting features actually understand.

Someone pointed out to me just recently that if we were a car company, we'd occasionally forget to ship right-side drive models, just because our testing and research has (historically) been quite limited. I chuckled heavily as I read that, because it's even more funny when it's true :)

So while even I'd disagree on the extent that it's a mess, and I know the people that touch it the most have a good grasp on what everything was intended to do, I can't help but acknowledge how confusing it is to folks that weren't so tied to how it became what it did.

I do not think the reasons need to be changed because the reasons themselves are clear and distinct. They apply to distinct problems, though any single post may suffer from multiple problems.

The "Debugging / No MCVE" close reason

This reason only applies to questions asking us to debug code that the author has written. This is for questions that either:

Questions asking how to accomplish a task

These questions are not inherently off-topic, but must be reasonably scoped and well defined:

These questions do not require code, though code (even pseudo code) can sometimes help with defining or narrowing down the problem. See: What's better: a question with no attempt or with an unfixable/irrelevant attempt?

Also related: Do we need a close reason for zero-effort questions?

Not the answer you're looking for? Browse other questions tagged feature-request flags .

237
Do we need a close reason for zero-effort questions?
40
What's better: a question with no attempt or with an unfixable/irrelevant attempt?
-4
How can we streamline the close flagging and voting dialogues?

145
A minor change to the description of the "not an answer" flag: "the question" → "a question"
1
should I flag a question on R to " it is very low quality" when lacking a sample data set?
22
Are "other" flags containing "spam" prioritized like actual spam flags?
2
Should I Comment After Flagging a Post?
151
Merge the "Not An Answer" and "Very Low Quality" flags into one
109
Should "Very Low Quality" flags be offloaded entirely to tag experts?