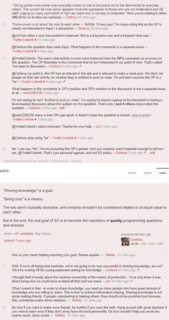 Share
answered Jul 13, 2018 at 14:22
user3956566user3956566
18
|  Show 3 more comments
Welcome!
This site is intended for bugs, features, and discussion of Stack Overflow and the software that powers it. You must have an account on Stack Overflow to participate.
Help
Visit chat

117
The use of gender-specific pronouns on Stack Overflow
41
When, and when not to disclose names when discussing a users actions on meta

27
This tag is kind of [fuzzy]
73
Declining Numbers of Women in Programming, What Can SO do to Help?
3
How to format this kind of code?
76
Is Stack Overflow considering the implications of posting the results of their Developer Surveys in the manner that they are being posted in?
303
Nancy's back, so I'm leaving and taking my money with me