So something seems to be wrong with this one - I posted this question: Strange votes on my account yesterday. As a comment to the answer, one of the moderators recommended to flag the new votes too, which I did accordingly.

All the flags on serial downvoting got declined, the moderator handling the flags gave following reason:

declined - you only need one flag to explain the downvoting, not one for every post

Fair enough, I've learned to only flag one post the next time - it wasn't a problem before, but things may change within 24 hours...

What I don't understand is,

I declined your flags. I handled all the flags as one flag, as they were all, essentially addressing the same issue, that of serial downvoting.

Firstly, you flagged every post that had been downvoted. It's only necessary to flag one post when you have an account issue. I counted and handled one for the serial downvoting, then counted the other as duplicate flags of the first one. This was made clear in the decline message.

declined - you only need one flag to explain the downvoting, not one for every post

Secondly, no person banned you from flagging, it was an automatic system ban, from having declined flags. and will lift in 6 days from now.

Finally, upon review of the serial downvoting, there was nothing out of order on your account, so the flag was declined.

We cannot stop people from choosing to downvote content, that's how the site works. If there was malicious downvoting, we would have it reversed. Beyond that, we cannot control the way people vote.

So, as it turns out, the moderator handling the flags handled two different, unrelated cases as one. The one they handled was borderline and ok to be declined. Unfortunately, they declined the other flags without looking at them then. 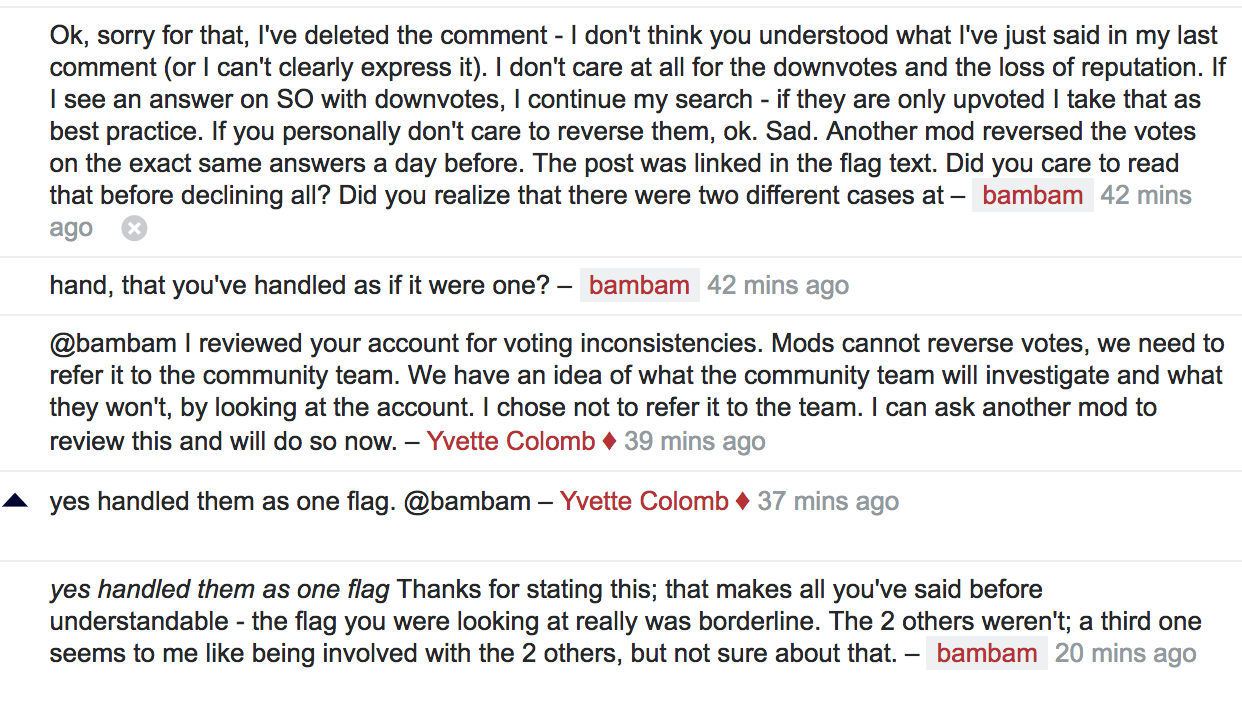 And today the serial votes were reversed.

Not the answer you're looking for? Browse other questions tagged support flags .

254
What can I do about getting a sudden flood of revenge downvotes?
30
Strange votes on my account

3
Custom moderator flags stay active
33
Edit war: How do I raise a flag without getting declined by moderator?
26
Serial voting not reversed, but flag marked as helpful
30
Strange votes on my account
4
Why was my custom flag about serial downvoting declined?