Do we remove tags from a question when the tag is referenced but isn't relevant?

For example in this question: 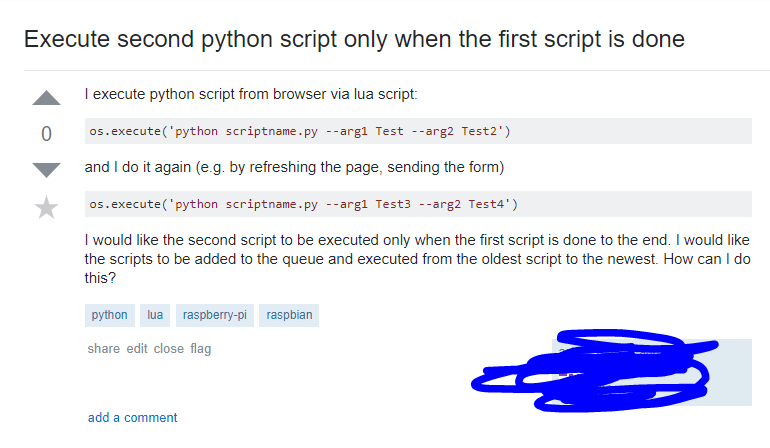 Although python is referenced in the question, it's not a relevant detail in terms of solving it. The question is about call blocking in lua, and the user just happens to be trying to call block a python script.

In this situation is removing the python tag in an edit appropriate?

In this specific case, I would agree with Nicol Bolas' answer: Err on the side of leaving it.

In the general case, if the tag is truly irrelevant, remove it. Examples:

In this situation is removing the python tag in an edit appropriate?

The question is asking about how to tell if the Python script is finished. That may or may not involve something Python-specific. Can Python spawn other processes and not tie its own execution to the execution of those processes? If so, then the answer becomes more complicated.

Or maybe it doesn't. Does the user even care about such circumstances?

I would err on the side of leaving it.

In my opinion the question would've been more useful had it asked how to execute external commands one after the other with no mention of Python, apart from maybe including it in the example command (and having the asker maybe later ask about Python specifically if the general answer doesn't work).

But it asked specifically about Python, so you shouldn't be quick to edit that out, in case there's an answer that would be specific to Python.

If you come back after some time (a few days or weeks or whatever) and see a bunch of answers (one of which is accepted) which are all clearly have nothing to do with Python, you could consider editing it out at that stage, to make it more useful as a reference post for duplicates. This would include removing the tag, but also editing the title and body to ask the more general question (but without removing the specific details, e.g. "I execute an external command (a Python script) from my browser...").

My argument for saying this is:

If in your opinion it appears that they are just spamming the tags to get more visibility then remove the tag and explain in the comment they should not spam the tags.

If the tag has no specific relevance to the question and would be considered noise to that tags followers then I would remove it.

In this case the raspberrypi and raspbian are irrelevant as well and should have been removed as well as the python since they are noise to those tag followers.

This question is about the shell and probably bash because those tag followers are the ones that should see this so they can answer it or mark it as the duplicate that it probably is.

This question is also closeable because there is no MCVE, what little code that is provided is out of context and vague.

Not the answer you're looking for? Browse other questions tagged discussion tags edits .