Am I being nice when I close this question as a dupe?

I become increasingly doubtful on whether I am nice enough, after closing this question as a dupe: https://stackoverflow.com/questions/51223975/how-to-get-standard-deviation-of-slope-and-intercept-of-a-linear-regression-in-r The OP is very annoyed with me. Can I do anything better in this situation? The following is the full history of comments. 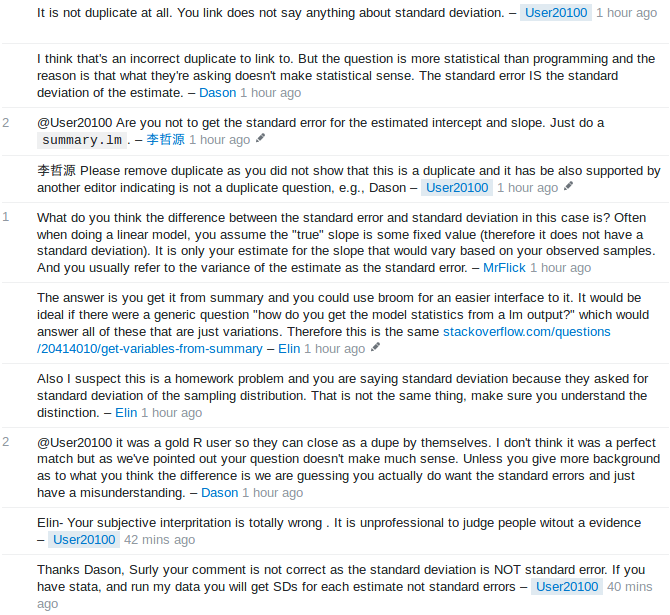 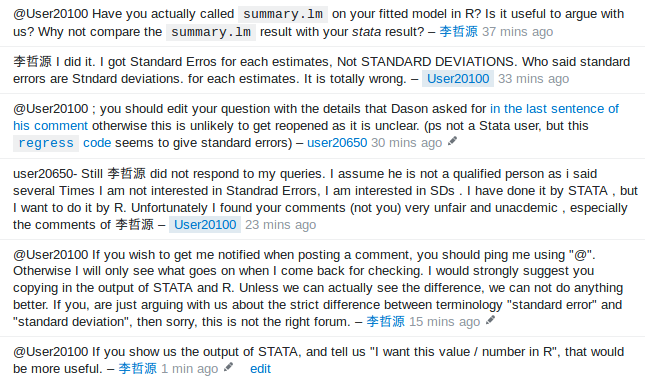 I agree that I've marked many many questions as dupe; sometimes as soon as that question was asked.

Oh, he was asking me to apologize.

For the benefit of those interested and without the sufficient rep to view deleted content. Here is the full image of the question and whatever comments were left when it was deleted.

It's not useful or polite to say:

Is it useful to argue with us?

Telling them to not argue about terminology also probably isn't useful or polite since they seem to think you gave them an answer related to one concept when they're looking for an answer for another completely different concept (which is, in principle, a reasonable thought and makes sense to point out, although the insistence here makes less sense).

In your defence, some askers refuse to accept their question is answered elsewhere (possibly due to missing the knowledge required to see this), refuse to clarify their question to explain, among other things, how it isn't a duplicate, refuse to provide requested information and are very persistent - there isn't much you can do about that (other than to move on).

In general, if the asker or someone else makes a point about it not being a duplicate, you can:

As I have noted elsewhere

Closing questions is being helpful, but may not seem welcoming to a new user.

Duplicate questions often need closure because superior answers may already exist. The problem this user seems to have can be summed up as

The duplicate did not answer my specific question and I do not want to try and apply it here.

As long as you, the voter, believe that an answer covering the question exists, it's your duty to help them by pointing them to it.

What if I'm wrong?

Understand that you, as a normal user with limited moderation, cannot do anything that cannot be undone by other users or (in extremes) a diamond mod. If other users disagree with you, they can comment and/or vote to reopen. Nobody is perfect. But, as for here, the user refused to take your actions seriously. I've sometimes had people come back and make solid arguments and/or edits that made it obvious it wasn't a dupe. The key for users is to remember that SO contains tools to discuss for a reason. If they refuse to avail themselves of them, that's not your problem.

I suppose it doesn't really answer your question, but since I cannot answer or comment on the original question due to its deletion, I'd like to put on the SO record that there is a statistically meaningful interpretation to the OP's question that was not raised in any of the comments, nor referred to in any of the three answers nominated as duplicates. There can be " percentile prediction bands" that can be calculated around a regression estimate. A 68.27%ile prediction band would have an interpretation like a standard deviation. It would hold points within a 2d range centered around the regression line that would be in the same proportion as would be held within 1 std-deviation of a one dimensional problem. It is for the opportunity to add this clarification that I will be nominating this for "undeletion".

I'm not sure who "Community" might be, but I think they might not have considered the statistical issues properly. At worst this could have been referred to CrossValidated as was suggested by at least one commenter.

211
Is asking reasons for downvote in comments non-constructive?
-32
As many have pointed out, comments are the problem then what is the solution?

2
Why was this question deleted?
3
Old dead meta links - should we encourage screenshots when posting links to questions?
23
How to react to a wrong duplicate closure (not my question) when the question has been deleted
17
Is this comment really "not nice"?
16
Allowing user to see all the dupes that have been marked as duplicate of a given SO post
1
What is the difference between the regression and linear regression tags?