How can we streamline the close flagging and voting dialogues?

If you can bear with these premium graphic artworks.

The current flagging system on questions has 3 or more dialog boxes to be navigated through to close for specific reasons or to use the "other" reason. The close vote dialog boxes have two or more to navigate through.

The UI is also inconsistent. The reasons all start with bold on the first dialog boxes and on the final one, the bold is scattered part way through sentences making them less obvious.

The flags modal has a duplicated duplicate close reason, on two dialog boxes (irony is noted).

We have problems with declining migration flags, as other sites usually don't want our stuff. So I recommend removing those suggestions altogether on flags and keep them only for the close voters, as they've had time to get to know how the site works (well some of them have). There's no real need to have the options for particular sites for migration within the main flag dialog, we could include them when the user selects on "belongs on another stack exchange site" or they could just be typed in, as they so often do for code review and in the comments.

Lastly, the broad and unclear reasons are on the flip side of the same coin, there's no real harm in combining these.

So my proposal is to reduce the number of dialog boxes by 1, by trimming the reasons, and putting the last two boxes into one box and making the format consistent with the use of bold titles.

Please give your suggestions. We may be able to come to a consensus, even if that may be leaving it as it is.

NB out of scope: Personally they're a little wordy and I would think would be improved with shorter reasons, less clutter with a good link in each for usage. Though this is out of the scope of this request. 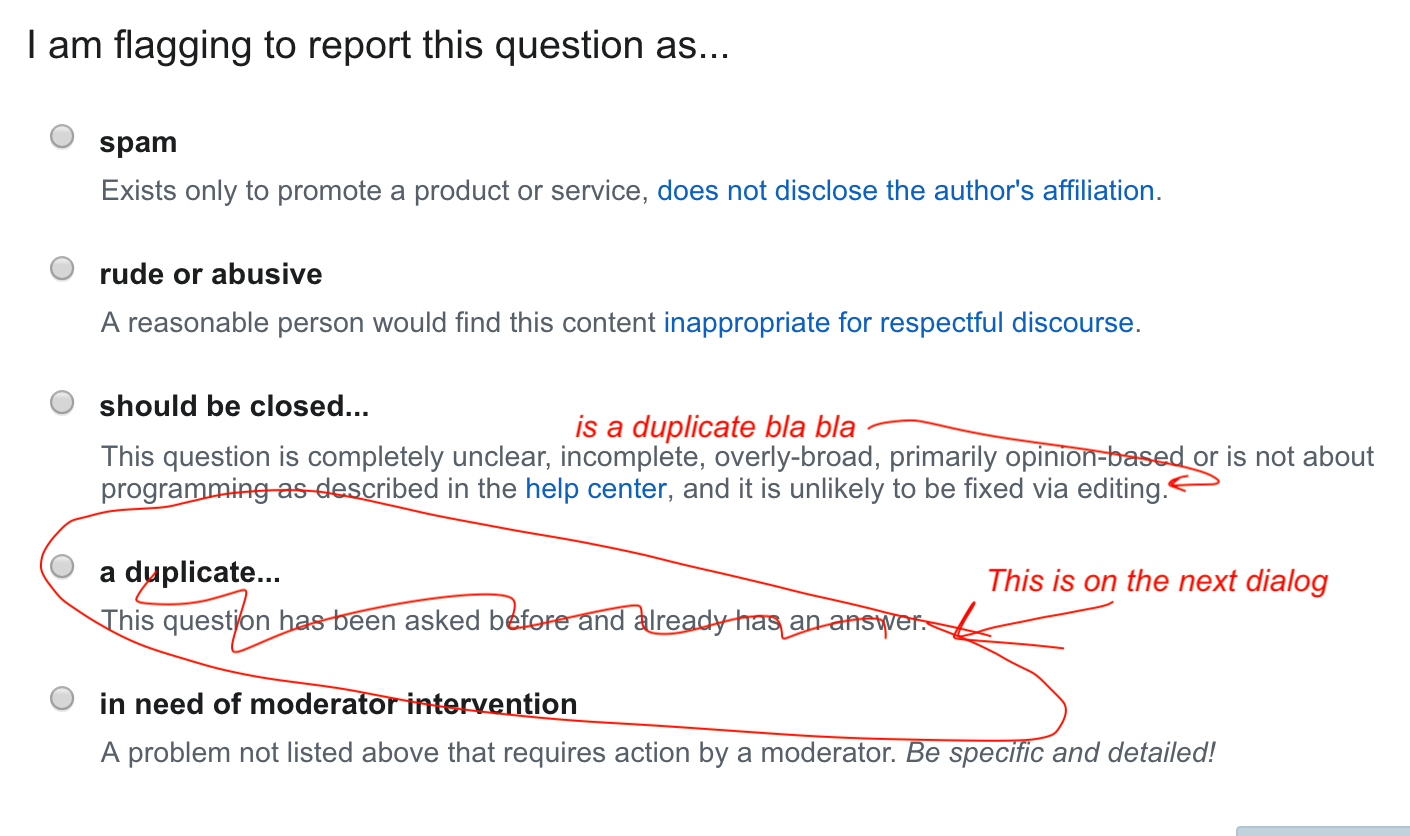 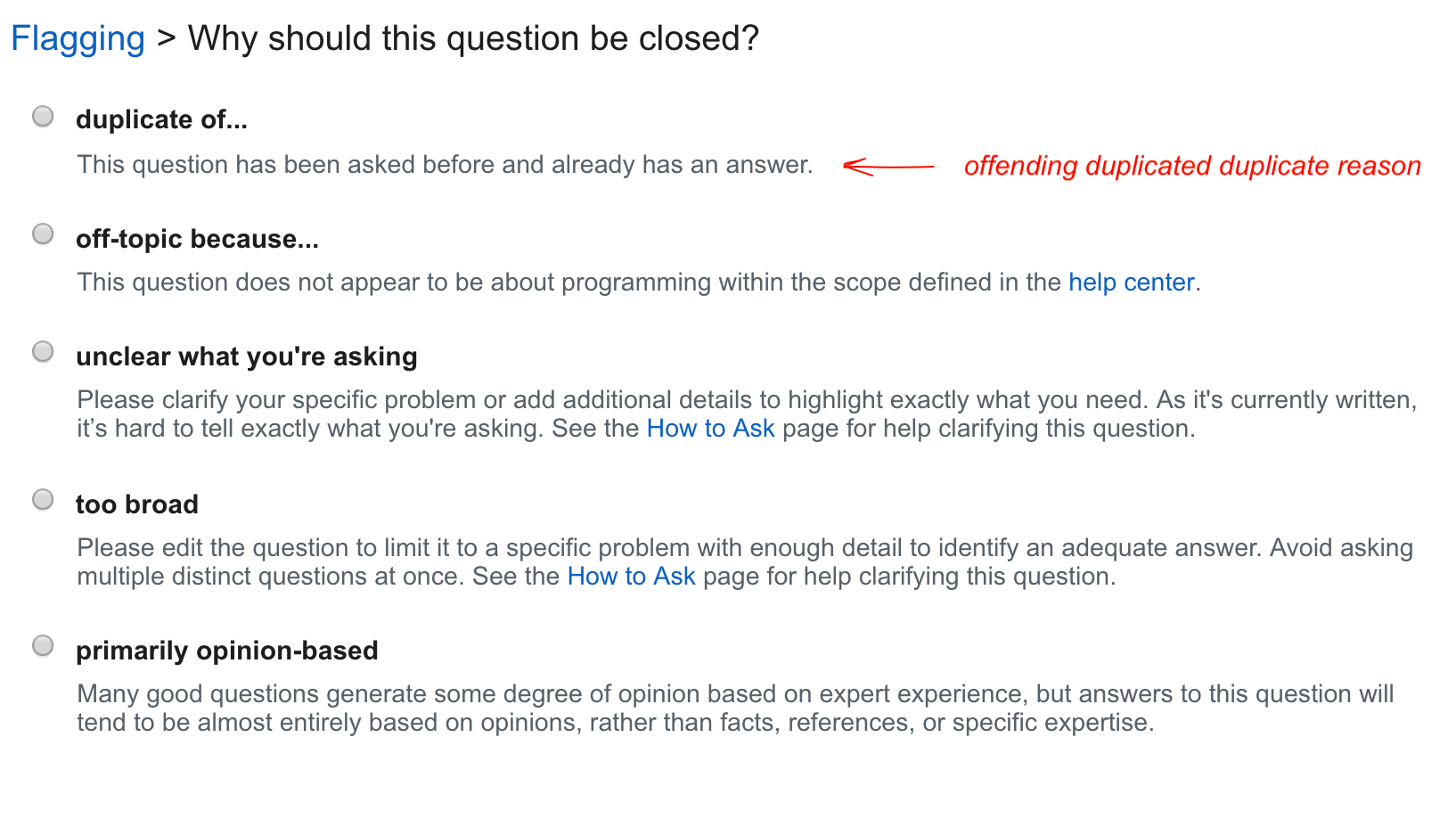 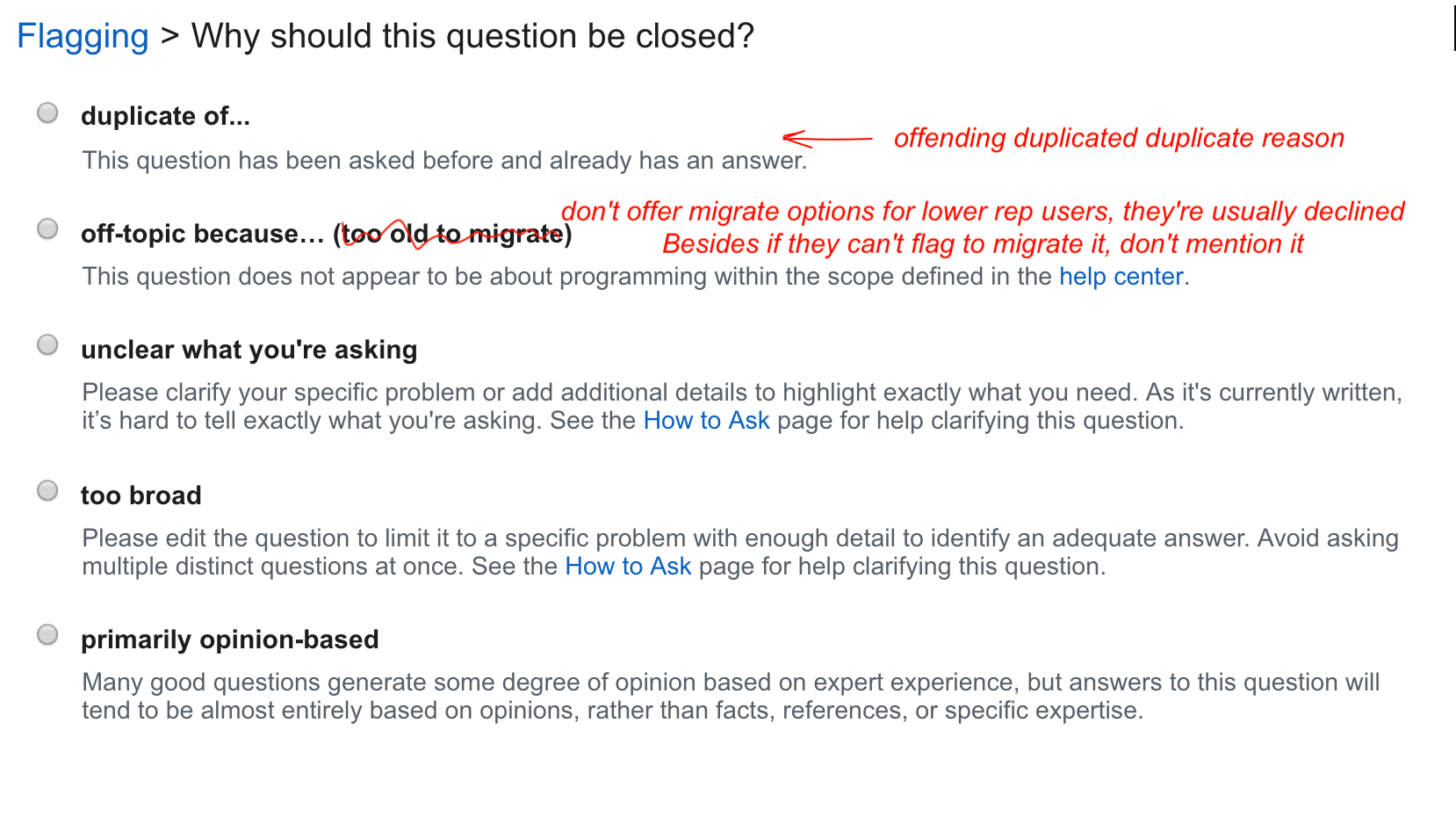 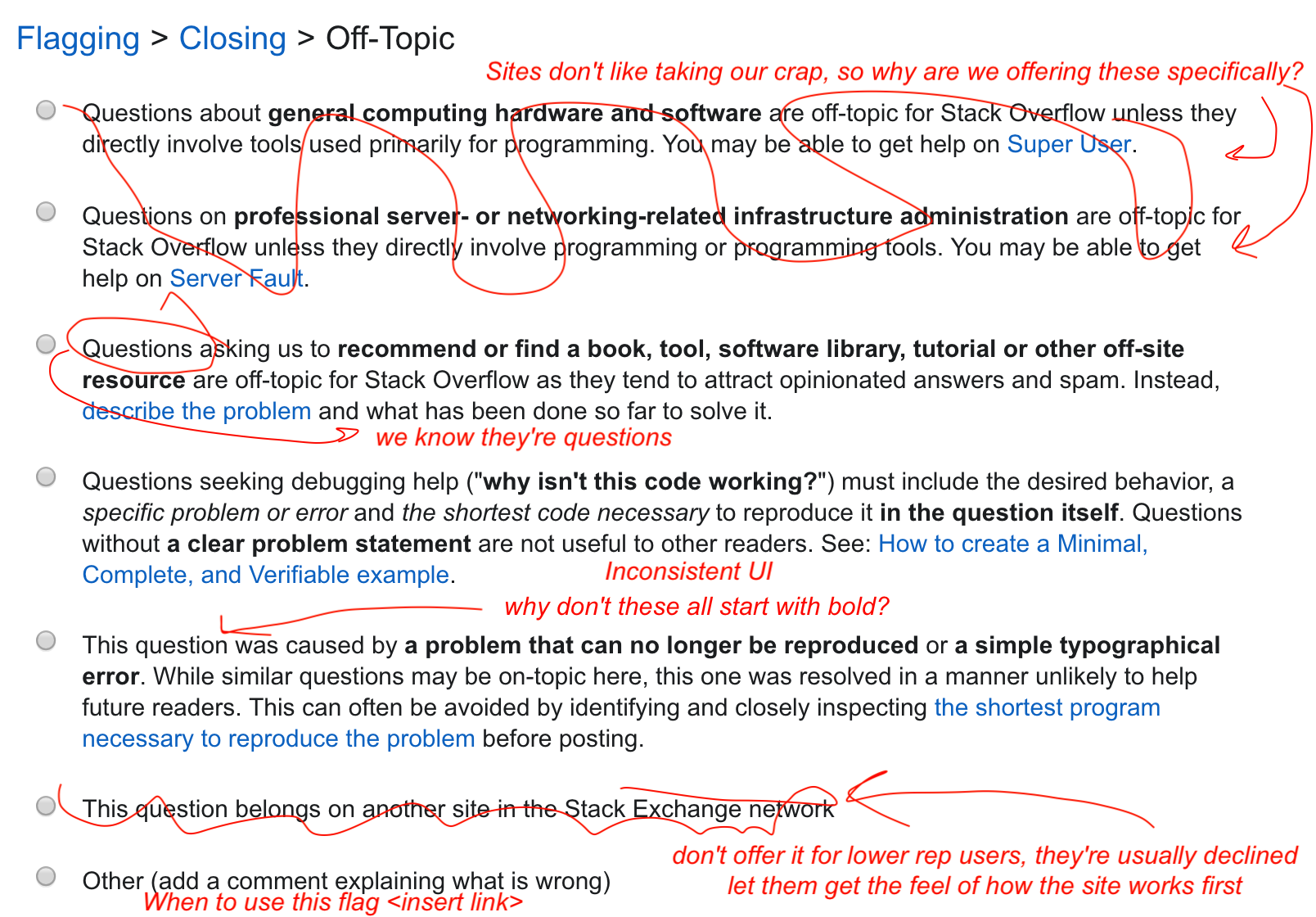 Why not simplify question flags to two dialog boxes?

I'd recommend Stack Exchange engaged in their own graphic artist. 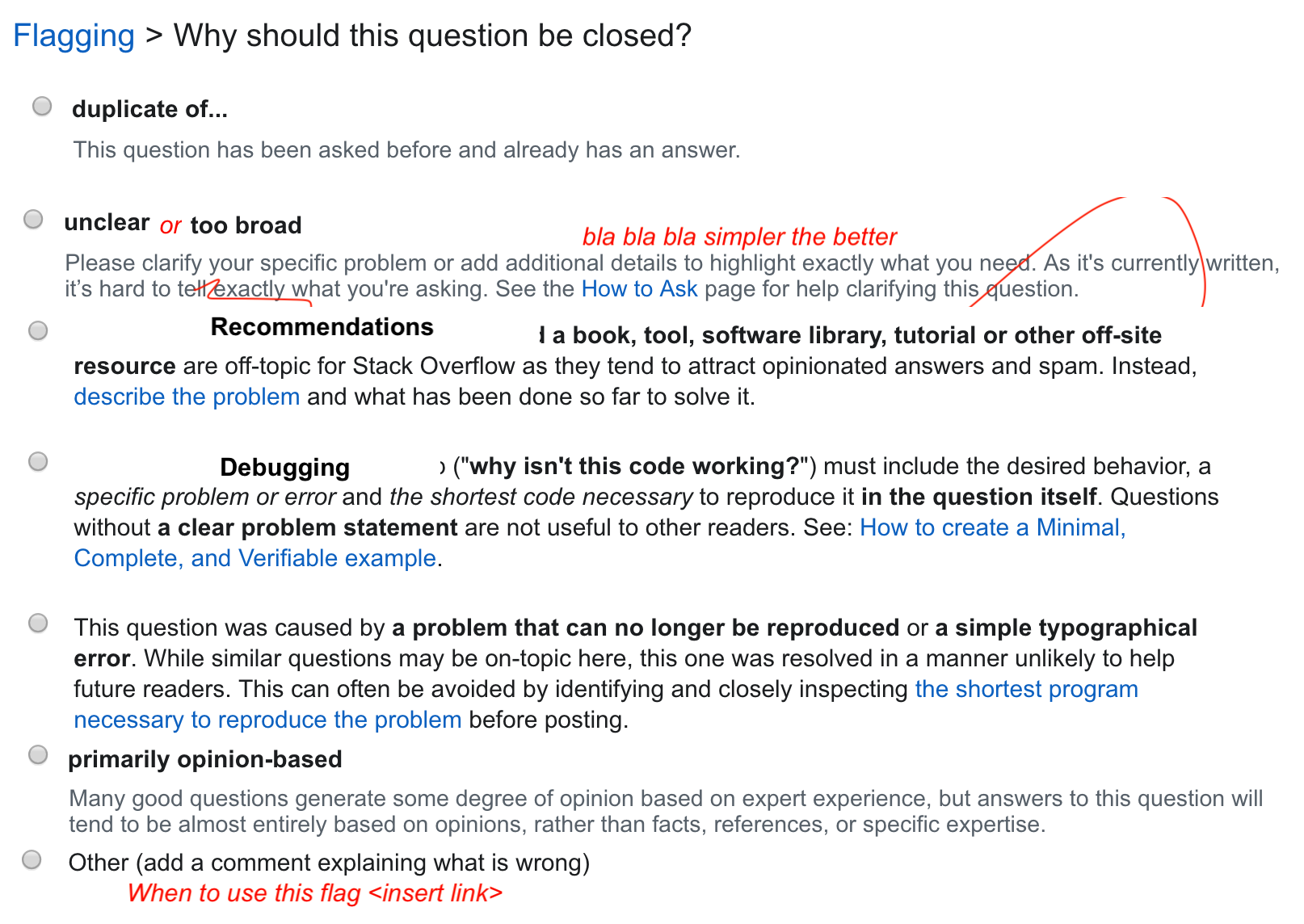 Without including the repetition between the flags.

Instead of two Close dialogs 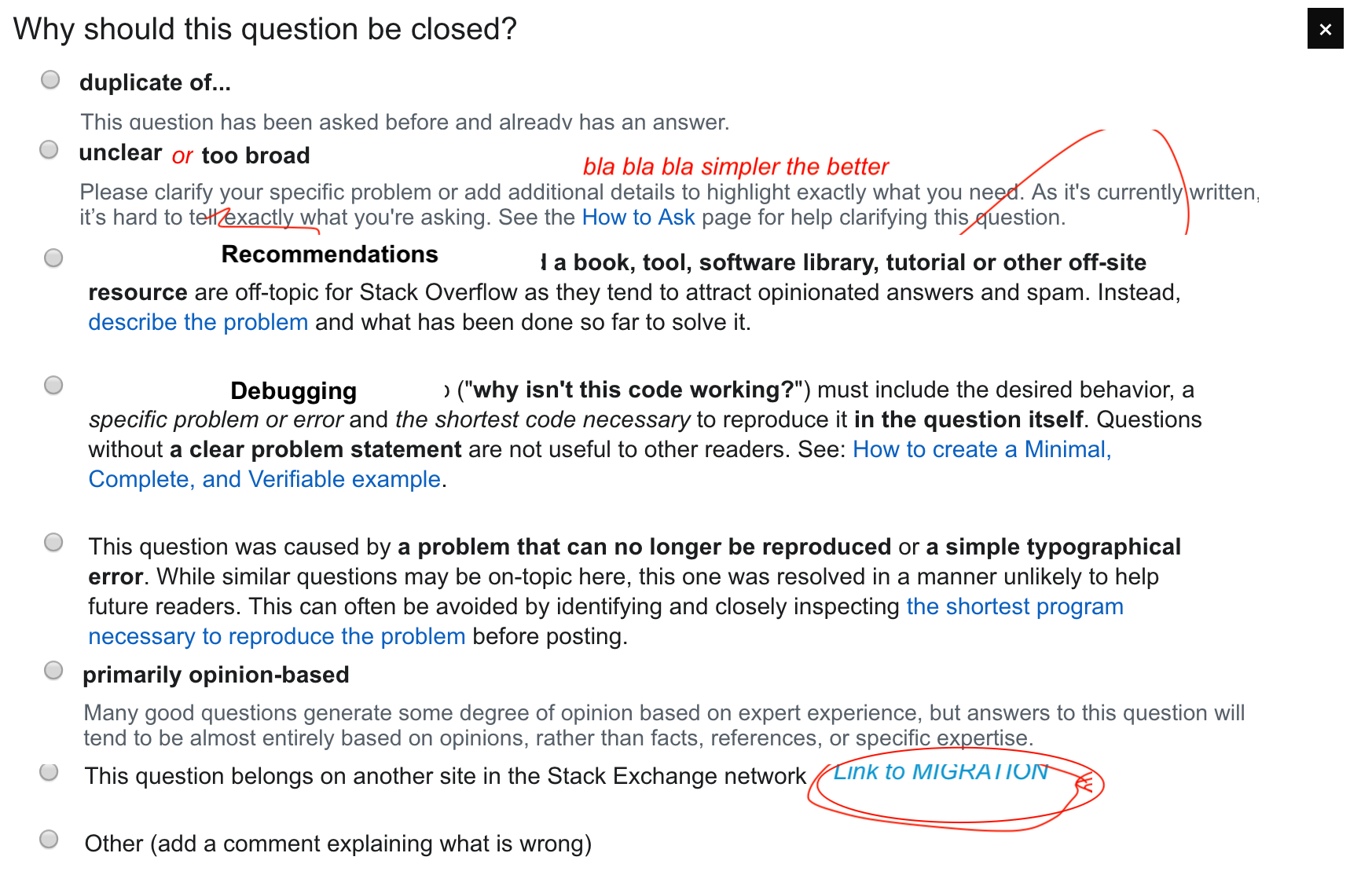 Optional when to mod flag link ^^^.

A few remarks about the individual changes outlined in the graphics:

Dukeling has a point in that, by looking at the changes individually, I'm not engaging with your overarching goal of getting rid of some of the dialogs -- in particular, doing that might be unfeasible without carrying out all of the aforementioned mergers and eliminations of options. Still, I believe the individual suggestions are worth considering on their own merits (some improvement is better than no improvement). Furthermore, removing some of the clutter, even if in a rather superficial way, might make it possible for us to see further improvements that are currently obscured.

I have a few quibbles with the proposed stuff

That having been said, migration should be a single unified box only offered to 3k+ users opening a close dialogue. I agree that letting them close-flag for migration for a mere 15 rep user is an invitation to get a decline. Leave it to custom mod flags if they feel that strongly.

120
Remove the mention of "Super User" from the standard off-topic close reasons
55
Migration of code questions from Stack Overflow to Code Review
-9
Should we rethink flags?
-11
Change the 'general computing hardware and software' off topic reason to one that clearly describes the 'write code for me' questions
-6
Are the close categories 'too broad' & 'unclear' distinctive enough to be useful?

15
closing unclear questions - which close reason to use and when?
48
How do VLQ flags work, what's their relationship to the LQP queue, what's their *purpose*, and how can the site document them better?
317
Educating people to flag spam and not vote to close
73
Can the mods agree on how we should mass-flag comments?
43
Considering changing the migration process