Typo in the "dev.isBored" SO jobs banner 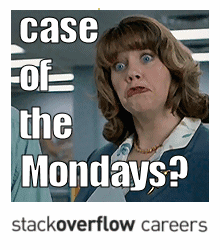 25
New user herobox content blurb is way out of date
34
The new top bar covers the "JavaScript is needed" banner
12
Regarding the [down-votes] and [up-votes] tags - the line must *not* be drawn here!
3
Email wrong when using Jobs Easy Apply