How to review suggested edits that fix security issues?

In the last days, I encountered several suggested edits that try to fix code in answers that are prone to SQL injections, similar to this edit: 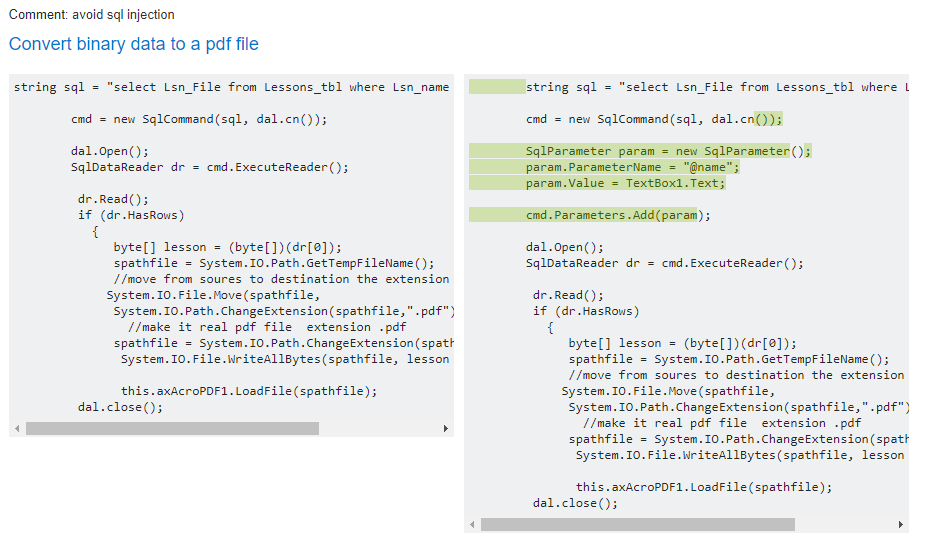 The question is now: Which action should be taken in the review queue? This meta question suggests that changes to code which modify already working code are not ok. The FAQ doesn't cover cases where already correct and working code gets improved/modified. I also don't think that How to deal with dangerous answers answers the question because the current code is not actively or intentional harmful but just has security implications.

At the moment, I'm tempted to reject such edits because they drastically change the code. But I do see value in these edits because we all know that code is often enough copied from SO without deeply understanding it.

An edit that fixes a potential security flaw in an answer, is a good edit.

Injection is one of the top vulnerabilities in the OWASP Top 10, and everything we can do to prevent it, makes the world safer for end users. That includes setting a good example here on Stack Overflow.

Stack Overflow is one of the first sites that people encounter when googling their programming problem, let's make sure they encounter answers that follow proper security practice.

Just make sure that the fix doesn't somehow invalidate the answer, and doesn't introduce new errors. If you aren't sure, Skip.

I think a lot of code from SO answers gets copied/pasted by people who don't take the time to fully understand how/why it works. That's fine, but it means we need to hold copy-pasteable code to a high standard.

Code with security holes is not ok. It doesn't count as "already working" in my book, unless comments inside the code block itself point this out, and/or list some special circumstances where the code is usable.

A sentence in the text outside is not sufficient; people skim SO answers looking for what they want. That's not a bad thing; maybe they already know some of what the answer explains and were just looking for a nice implementation of something, or maybe they'll get around to grokking it later. SO answers should support skimming by bolding a key/topic sentence here and there, and/or using --- dividers and headings.

Code that "happens to work" for some inputs but fails for others is not "working code".

If you find problems, especially in a highly-upvoted answer on a popular question, fix it with an edit if you know the language / subject well enough that you're confident it's a real problem and you know how to fix it. That's one of the major reasons why users are allowed to edit answers from other users.

If the user who posted the answer doesn't like your edit, they can make their own edit (starting from the revision before your edit if they want). But until they get around to it, it's much better to have a fixed answer than a buried comment about a serious problem. Most people welcome improvements to their answers, when the editor and editee agree that an edit was an improvement.

Do not reject it just because you don't understand it. Only reject if you know the language / tag and know it's a bad code change. If you don't know the subject, skip it, because it definitely requires domain knowledge (unlike a grammar or formatting cleanup).

Approve if it fixes bugs, including but not limited to security bugs. If it fixes bugs but introduces new ones, or unnecessarily makes the code significantly worse in some way, reject (with a custom message about what the problem is) or improve it.

It's too bad there isn't a mechanism to preferentially show code-change reviews and tag-wiki edits to reviewers with score / badges in question tags, so reviewers could spend more of their time looking at changes that only they are qualified to handle.

(This is why I pretty much never do reviews. I'm an expert in less-popular tags (assembly), and watching activity in those tags directly is much more useful to the overall quality of SO than spending time mostly Skipping reviews of posts in popular languages I know very little about, only being able to do anything useful on ones that anyone could have handled.)

114
How to deal with dangerous answers
222
When should I make edits to code?
9
When reviewing, is it OK to accept code edits to an answer?

44
Are edits that insert Swift 3 code into existing Swift 2 answers acceptable?
4
Editing of Insecure Code Examples
39
How to review edits that add images?
15
How to review helpful+harmful suggested edits
24
Should I approve suggested edits that only add a language to a code block?
37
How often should these "are you paying attention" review tasks appear?
0
Linking to an exact duplicate external resource