Can users be educated without it being branded a "slinging match"?

By "educated" I mean: "be aided in their personal improvement as a developer, and their use of the site" but that was a bit wordy. I don't mean it in a condescending way.

This evening I happened upon the following question which is essentially a question about the this keyword in javascript, which changes scopes in ways that aren't obvious. Naturally, I marked it as a duplicate of this protected question because reading it would not only solve the current problem for the OP, but also prevent future related problems.

OP complained about "***** duplicates", and after querying what was wrong with a duplicate, I tried to educate the OP on why a post being marked a duplicate of that kind of protected question is a good thing.

Now, perhaps the mod read as far as the first responses to the above, since OP replied "dude it's like 100000 lines long and this is a simple problem", so in a similar vein I had replied "dude do you understand the nuances of the this keyword? No, because you're having this problem. Read the duplicate so you can understand it and prevent future problems." I understand that mimicry may not have been the best way to respond, but it was more meant as a "look, this will help you fix it. What more convincing do you need?"

I then went on to elaborate by saying something along the lines of this:

The reason that we mark questions like this as duplicates of those kinds of protected questions isn't because we're lazy, or we don't want to answer, but because it's more of a "give a man a fish and he's fed for a day, teach a man to fish and he's fed for the rest of his life" kind of thing. You can either be a bad developer, and ask a question every time you have a problem, and never understand the causes, or you can be a good developer, you can learn the nuances of the language you are using, and understand the root causes of these issues, and maybe even help other people one day."

Looking back at the question again, I find that a mod had deleted all the comments including the duplicate link* meaning that OP can't even investigate the topic in more depth unless 4 other people agree to mark the question as duplicate.

* Since writing this, I note that Cerbrus has marked it as a duplicate so OP can now see the link to the other question should they want to read it.

I don't entirely understand why this was branded as a slinging match, unless there were other comments afterwards that I didn't see? Is trying to simultaneously solve OP's issue and encouraging them to be a more self-sufficient developer by learning about the technologies they use now something we can't do? If we can do it, how can we not have it branded as a slinging match?

The mod's advice was "No more comments here please. Use your votes", but the question in and of itself wasn't bad. Maybe not even poorly researched, since the behaviour of the "this" keyword isn't necessarily obvious. It doesn't deserve a downvote. Maybe it even deserves an upvote.

After responding to a flag on the post I found the following, which is what I categorise as a slinging match. If adults cannot talk in a civilised manner without a thread deteriorating into two-way insults, then they will be told to quit arguing and use the mods tools available to them. In this case Voting. (close voting, up down voting, delete voting) 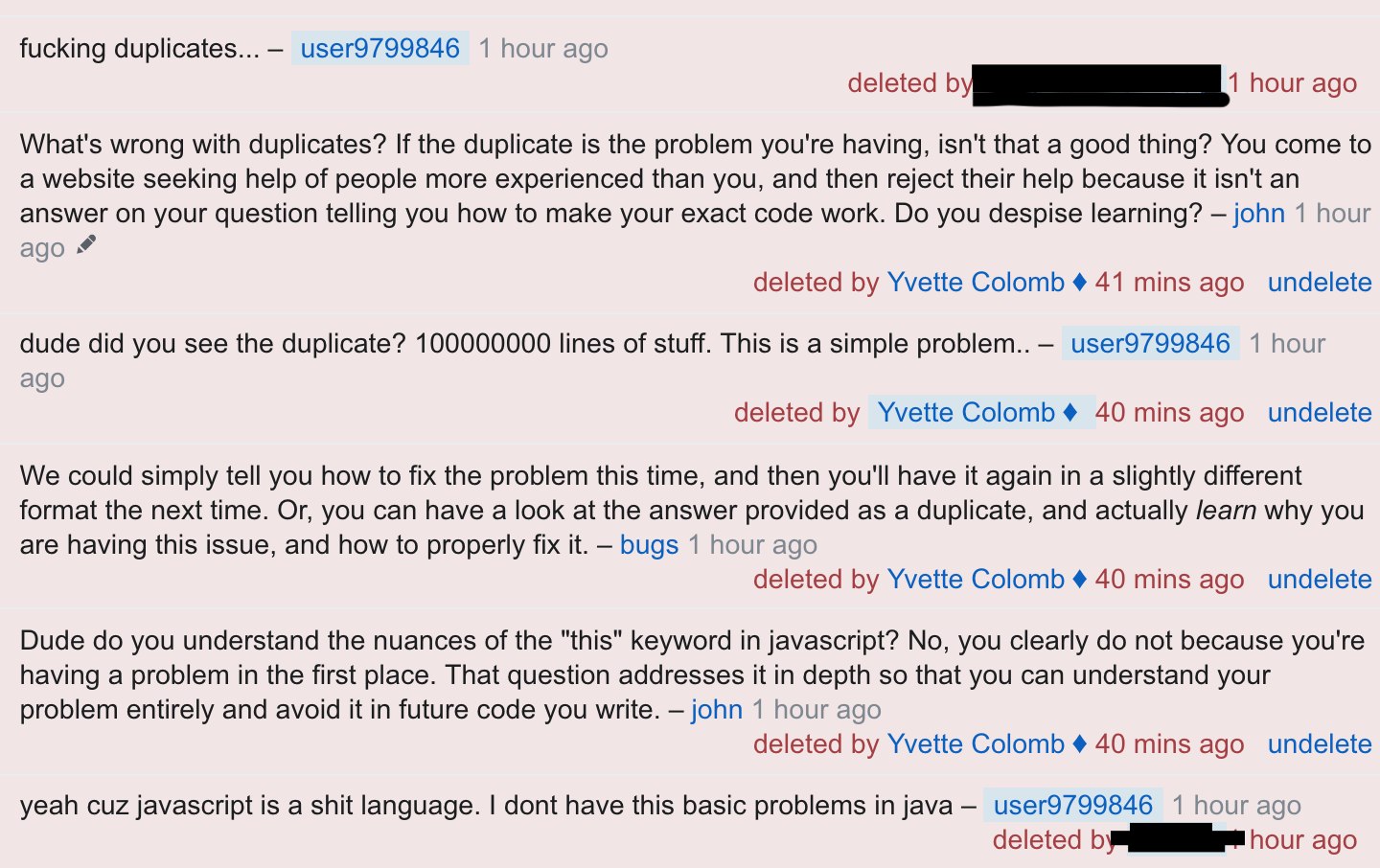 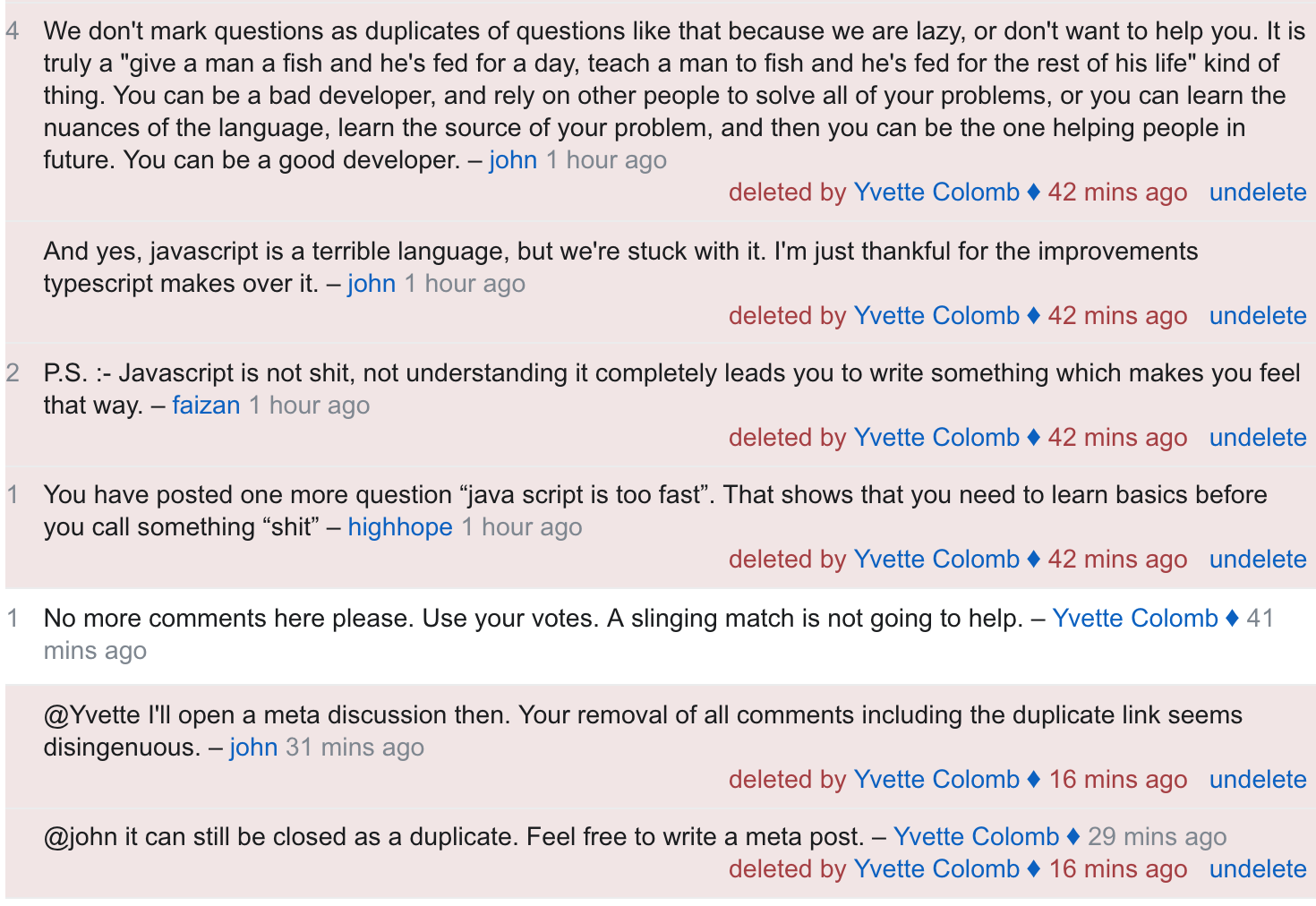 Call it what you will, but the thread quickly deteriorated.

The question is closed. I undeleted the duplicate link and asked a gold badger to review the post, which he did and promptly closed it.

There was nothing disingenuous, just simple moderation of a thread that had more angst in it than constructive good. The post had two answers, at least one working, in terms of OP clarification, the comments were no longer needed.

There is an irony in making a complaint on meta when some of your behavior was off base. Don't argue with people. State your case and walk away. Comments and being nice has been a big deal on meta over these past weeks and yours and the OP's comments were unacceptable.

Yes, I shouldn't have deleted the linked duplicate comment, it is a simple thing for me to undelete it. You could equally have pinged me as you did, requesting I undelete it rather than posting yet another hostile remark.

As you note, I did not stop you from going to meta, as this is your right and it's good to get clarity over these issues. Anyway, you're right, a slinging match is not professional. I'll choose my words more carefully next time.

Avoid having discussions in comment. Some people just aren't receptive to that and that's not what comments were made for.

If you want to leave a comment, it should pretty much fall into one of these categories:

[1]: If you're regularly providing explanations of site features, that might be a sign that (a) you're explaining too much or (b) the UI should be changed to better explain things (but of course you can't do much about the latter apart from posting a Meta discussion or feature request).

If the goal is making the asker aware that good duplicate closures are a win-win situation -- and that is certainly a worthy goal -- one reasonable approach as an individual close voter is using a comment to make the usefulness of the duplicate clear, thus giving the asker an object lesson. Show, don't tell.

The suggested question is relevant to your issue because [a brief clarifying remark]. In particular, have a look at [some specific section of the long answer to the canonical target]. Feel free to leave a comment if it still isn't clear.

Any of the three sentences in the sample comment might be omitted, depending on what the circumstances call for. I recommend leaving such a comment at the same time the close vote is cast, thus acting preemptively rather than reactively.

40
Can questions that "boil down" to another question be closed as duplicates?
1
Should this question be protected?
1
Why was my comment removed?
20
Is there a reason for unprotecting a question?