How to handle users that do not have time to learn?

So through the comments it became clear that the user just wants an answer and doesn't really want to take the time to learn. I hesitated to post my last comment, but I strongly want this user to understand that I strongly disagree with their outlook on their issue.

Is this improper? Should I just down vote and move on? 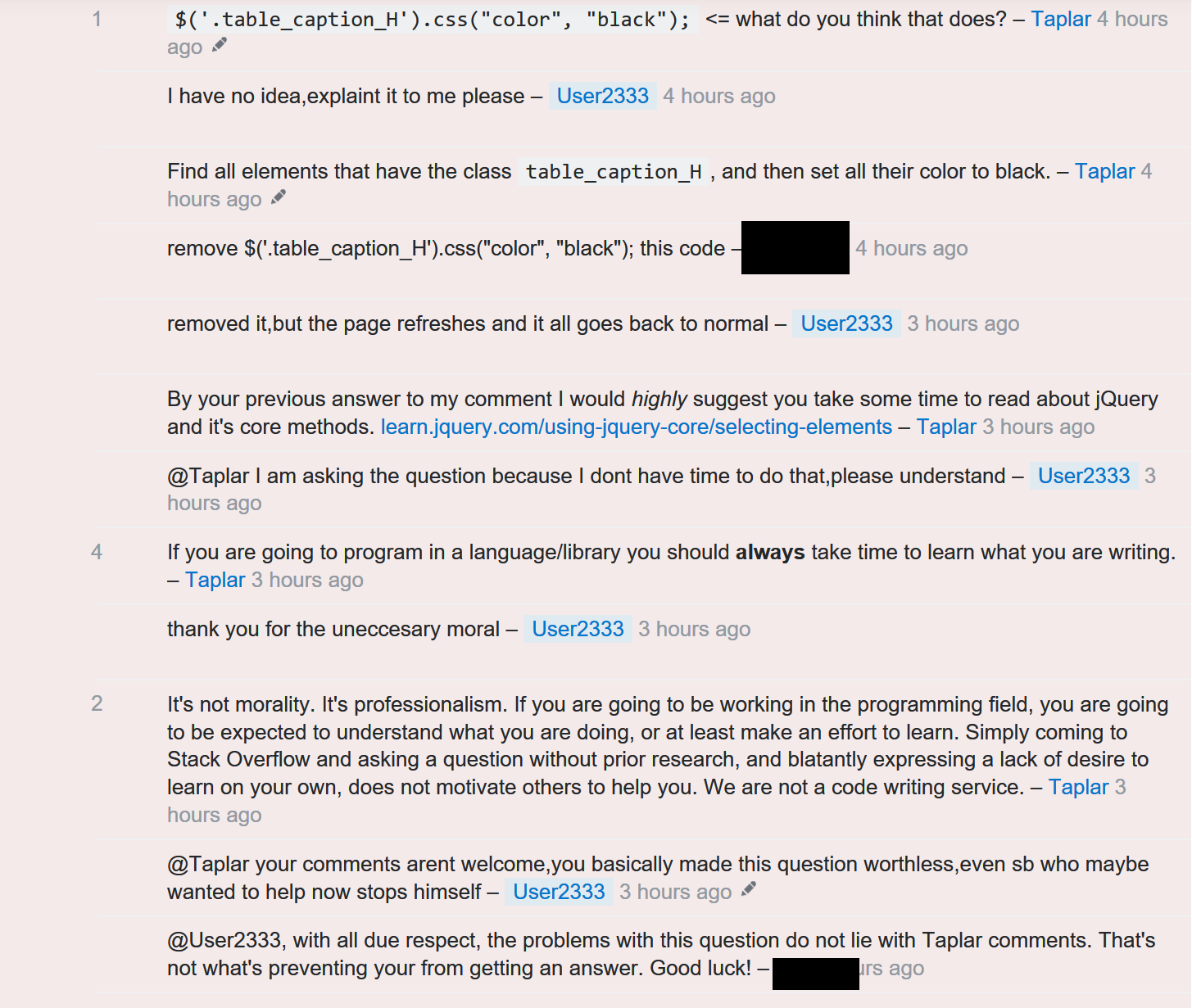 The way I'm going to phrase this is guaranteed to rub you the wrong way, so I'll just say it.

You were both in the wrong.

The OP was in the wrong for posting a question that is at best incomplete; it outlines some code that they've got but it doesn't actually agree with their picture. Had the OP invested time and energy into their question, we'd be able to see exactly the structure of their table and see if they had anything else on it that could interfere.

The best thing that could happen to their question right now is for it to be closed so they can take the time to actually edit in the code that they're missing.

You were in the wrong for antagonizing the OP. Yes, I get it; they should know a thing or two about the framework that they're asking on, but once you recognize that they don't understand, there are two choices you can make:

Instead of the condescending-sounding question of, "$('.table_caption_H').css("color", "black"); <= what do you think that does?", You should have just walked away. This way, at worst, the OP feels like we're being antagonizing and oppressive to him and his learning experience rather than him having first-hand experience of an actual person commentating on how they should learn before asking.

No really, I get it. You have a limit as to how much you're going to help someone. I get that, and I respect it - I do too. But you should absolutely restrain yourself when it becomes crystal clear that the OP is not going to make their question any easier to answer. Your comments literally harmed whatever message of "please do some research before asking" you had there.

I would have given up sooner, and that says a lot coming from me.

If someone is being difficult ("thank you for the unnecessary moral"), rarely does pushing it help anything, even if you're in the right, and even if you're polite. Once it's clear that they're in the "answer the question or gtfo" mood, I drop it. Forcing the matter just leads to nasty remarks, and I don't contribute to SO to get stressed out.

I wish there was a reasonable resolve to every case, but as I'm increasingly learning, not everyone wants to listen.

I would recommend that you should downvote and move on if the question or code is of poor quality, often indicated by the lack of formatting, the lack of providing a Minimal, Verifiable, and Complete solution.

However, if there is a solution or at least a method of getting the asker closer to the solution, just consider posting a comment, giving tips how to solve, and if necessary, steps to improve their code.

75
But seriously. How to be nice when trying to say the code is crap?
78
Can we support users who do not understand how to debug their code?

6
How to handle user who only ever edits posts
34
How to behave with a user repeatedly pinging me in comments
39
How to handle "I don't want a complete solution. Just a pointer in the right direction"?
30
What happens when I flag an unwelcoming comment in a blatantly poor question?
57
Meta does in fact have low quality questions