In a comment to this (clear, but zero-effort) question, a >15k user made the following request:

This comment has been upvoted three times. In its nature, it seemed to be similar to a "vote to close", but the problem was that the question was not closed properly. Since it wasn't closed properly, it started to attract answers of varying quality. Those answers all got downvoted by multiple users.

Since someone has already posted an answer, I thought that I could at least post a reasonably concise solution (hoping that either the OP learns something new, or the other answerers find something valuable in it). Moreover, the last time that I checked the relevant Stack Overflow blog postings, the suggestion seemed to be:

(One might question whether this is the most eloquent formulation, but the sense is clear: providing good answers to bad questions should be OK, at least that's what I understood?)

So, I posted an answer too, and also got downvoted, then deleted my answer.

A few hours later, some 26-rep user (who could not see all the downvoted and deleted answers) posted yet another solution. That solution had the most nested loops among all the answers, so at least it didn't seem like the most concise one. 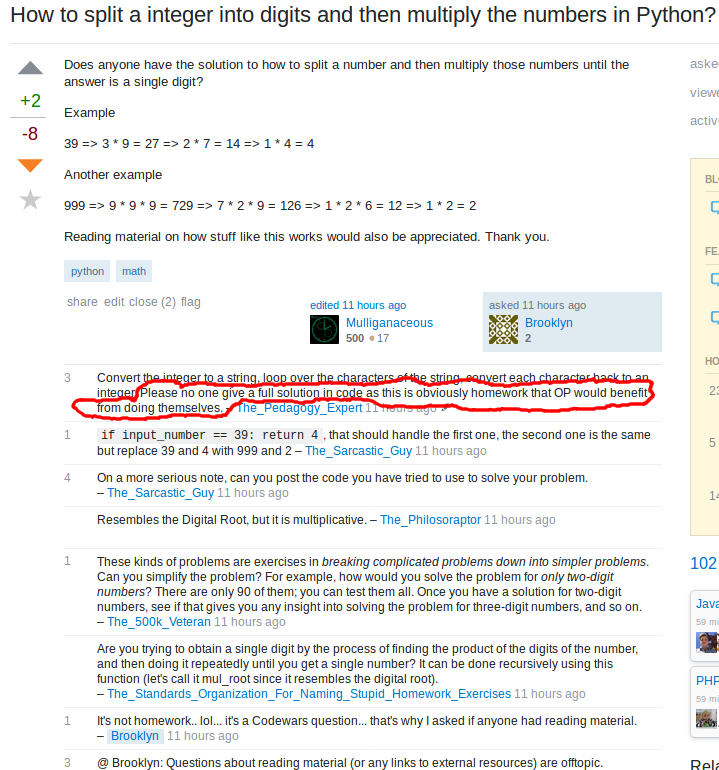 What should I do with such "not-quite-VtC"-comments? Temporarily keeping bad questions "somewhat-half-closed" by a rain of downvotes just doesn't seem right.

Such comments do not seem to align with the goal of creating good content and serving the future visitors (instead of providing personal tutoring to one particular user).

Any hints how to deal with such comments and how to clean up this mess would be appreciated.

Update: I'd like to explicitly exclude a similar situation where a golden badge holder with a dupe-hammer requests to wait with answers because he or she suspects that the question is a duplicate and waits for clarification by the OP. The case with a golden badge holder is different, because (s)he is obviously trying to improve the average quality of the content on the website, whereas in the concrete example described above, the commenter requested to post answers that might be suboptimal from the point of view of the visitors who will read the answers in the future.

I agree that this is problematic behaviour, and a very slippery slope. This has little to do with a Programming Q&A, it's a judgemental mob. Yes, the question is pretty darn lazy, fine. However, it is a programming problem, it's a pretty well scoped problem, it's even a fairly generic problem that others could benefit from.

The only reason we're "denying" giving an answer is that we perceive the OP doesn't deserve it. And that is dangerous. So we're not going to answer if the question appears to be a homework question by a student? Who are we going to deny answers next? Askers who have tried for less than 30 minutes? 60 minutes? 3 days? I've ranted about this before, but you can't prove effort. We're asking people to "show effort," but that is not an end in itself. It's mostly so we can better diagnose where they're stuck. Not so we can judge whether they're worthy of an answer.

What about comments dissuading anyone from posting an answer?

Ignore them. You don't need to bend to group pressure. Apply your own good judgement. Stand by what you think matters. If the comment is causing trouble or is superfluous, flag it as such.

Basically, what you have is a group of users trying to manually reinstate the "Too Localized" close reason. Back in the day, that question would be closed for being too localized for the specific user. That the problem was so narrow in scope that any answers would be of little value to the "not that person" department.

What you do with such a comment is up to you. You can follow the current rules and answer anyway. Yes, the Too Localized people will likely putatively downvote your answer, but you provided an answer that will serve the Audience of One. Feel good about that and move on.

Or you can choose to agree that answering localized questions is a waste of time, that it does little for serving Stack Overflow's broader goal of providing knowledge that is broadly useful. And therefore, you'd just move on of your own accord.

It's not really "too broad", but I don't know how else to close the gimmetehcodez

Lack of effort is not a close reason. Low-effort questions often turn out to be too broad -- because they demand too much code to be written, or an excessive amount of ancillary explanations to be given to make the asker able to understand the actual answer -- or closeable for some of the other reasons. If a low-effort question is not closeable due to one of the existing reasons, it should not be closed. In such cases, feel free to downvote it, or to ignore it, or to answer it in the way you consider to be most useful.

(Do note that encouraging the OP of a requirement dump question to say more about which specific difficulties they are facing while trying to solve the problem is often a sensible thing to do, even if the question doesn't merit closure, simply because that makes for a better question.)

One rather serious difficulty with quasi-vote-to-close comments is that closing is generally a matter of editorial judgement, over which there can be reasonable disagreement even among folks trying their best at enforcing site policies and guidelines. That is especially true for reasons such as "too broad", for which there is no objective yardstick to point to. If I think a question should remain open, I can't coerce you to retract your close vote; if I think it should be closed, I can't coerce you to delete your answer. That must hold even if I'm accompanied by a group of like-minded users, lest we end up acting as "a judgemental mob".

(Note that it is fine to, say, leave a comment pointing out why a question should not be closed, if you think it is attracting unjustified close votes. Adequate behaviour in such cases is primarily a matter of circumspection, of knowing where and when to stop.)

The other answers deal with the specifics nicely. I'm just going to explain the phases I go through. I'm getting quite good at writing downvoted answers (~1% of my answers are downvoted, many times due to question quality concerns), so I speak from experience.

The comment does not clarify or ask for clarification regarding the question. You may read it. But it is also safe to disregard. Comments are, after all, ephemeral.

Answer if you feel you can add value

If you feel you can add value, answer the question. One person may believe it's impossible to add value to a poor question. Another might be believe it is possible. The good thing about SO is YOU get to make the decision. Do what you think makes a good Q&A.

Be ready to accept downvotes and don't let it faze you

I seem to specialize in answering questions which get downvoted or, occasionally, deleted. Especially when advised not to answer. Revenge downvotes for defying the puritans are typical. If a question I answer is deleted, I might go back and write an embellished Q&A.

I don't agree with any of the posted answers so far, and I'm baffled how everyone seems to think this question is fine.

It should be closed as off-topic or too broad. Period. There is not just a "lack of effort", the question is not even on-topic for this site! The question may or may not be on-topic on the math or comp. science sites.

In addition "reading material on how stuff like this works would also be appreciated" is a request for off-site resources, which is also off-topic.

The only thing related to programming here is the Python tag, which we can only interpret as "gimme teh pyton codez". Adding that tag does not make it a programming question. Adding the OP's attempts to implement it in Python would on the other hand make the question perfectly on-topic. That's the only way to fix this question and so it can only be fixed by the OP.

This question should have been down-voted and closed much faster. Anyone attempting to answer too broad off-topic questions instead of flagging/closing deserve all the down votes they get.

So the core problem here is not the comments, but a complete failure by multiple high rep users and moderators to close the off-topic question fast enough.

1221
Why is Stack Overflow so negative of late?
1046
How do I ask and answer homework questions?
239
Do we need a close reason for zero-effort questions?
64
Does the recent blog post on being less hostile contradict "How to Answer"'s advice on not answering bad questions?
22
The challenge of burninating [hackerrank]
-25
Question deletion
3
Is it OK to ask (and answer) a programming challenge found on another website?
-42
Addressing the highest friction point of seeming welcoming: heavily rate-limiting comments
-9
Rephrasing "research effort" to something less contentious
-75
Please, is anything going to be done about the pedantic question closers?
See more linked questions

37
Relax close vote requirements for low-quality questions
4
How to deal with very simple questions that garner downvotes?
215
Why can't we change our close-vote reason?
4
Which option shall I use to close questions with answers in comments?
2
Closed question via 5th vote, but incorrect close reason won 3-2
15
How are duplicate questions deleted?
29
Why was my question closed with "seeking recommendations" feedback when I asked how to solve a specific problem with a specific library?