“Prefer not to answer” in the Developer Survey Results 2018 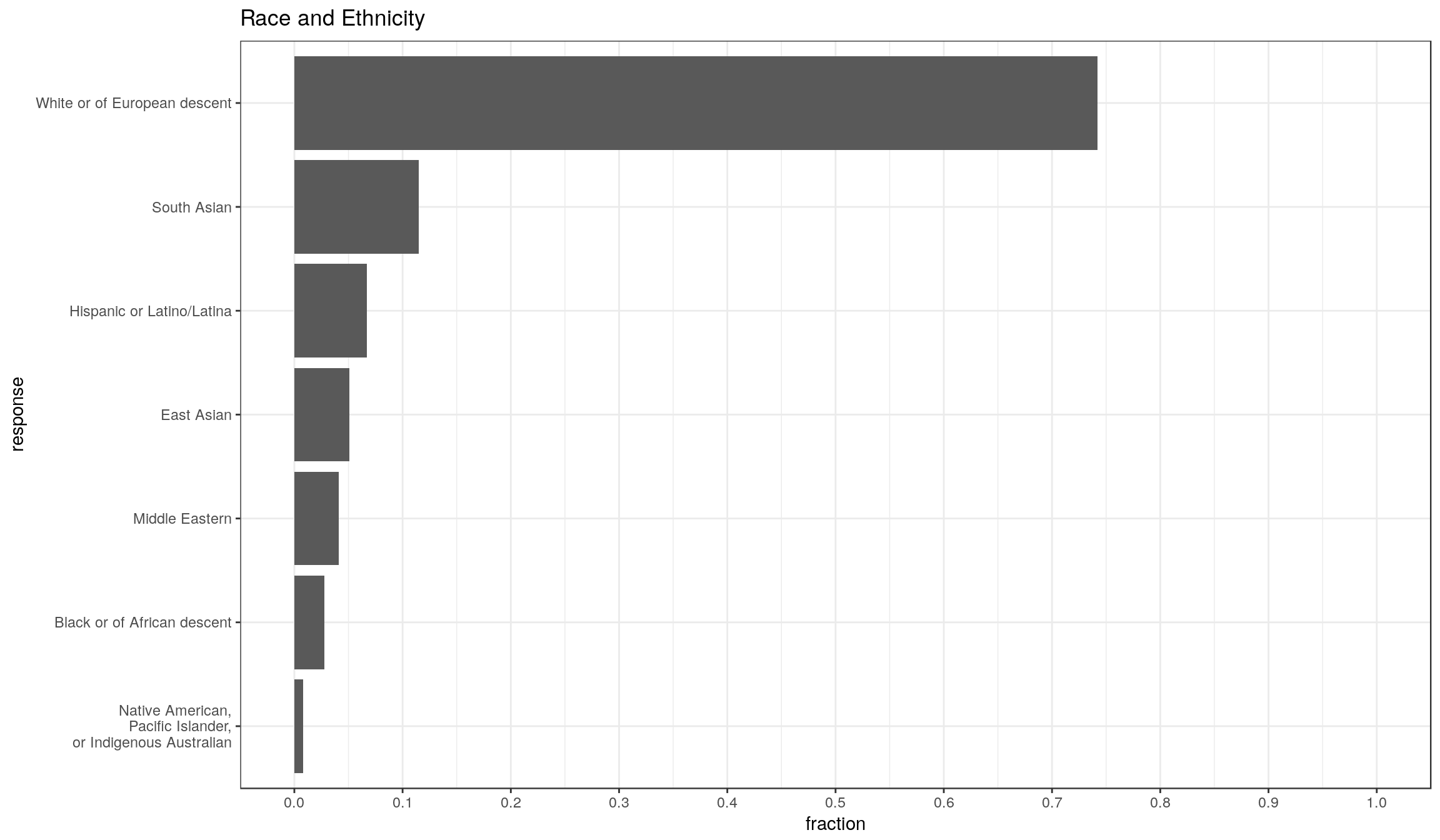 Here again we see evidence for problems with diversity and inclusion.

although such a low percentage points to problems with inclusion in the tech industry in general and Stack Overflow in particular.

This data has been used outside the site as an evidence of toxic elitism and in my personal opinion, had significant impact on the discussion around Stack Overflow Isn’t Very Welcoming. 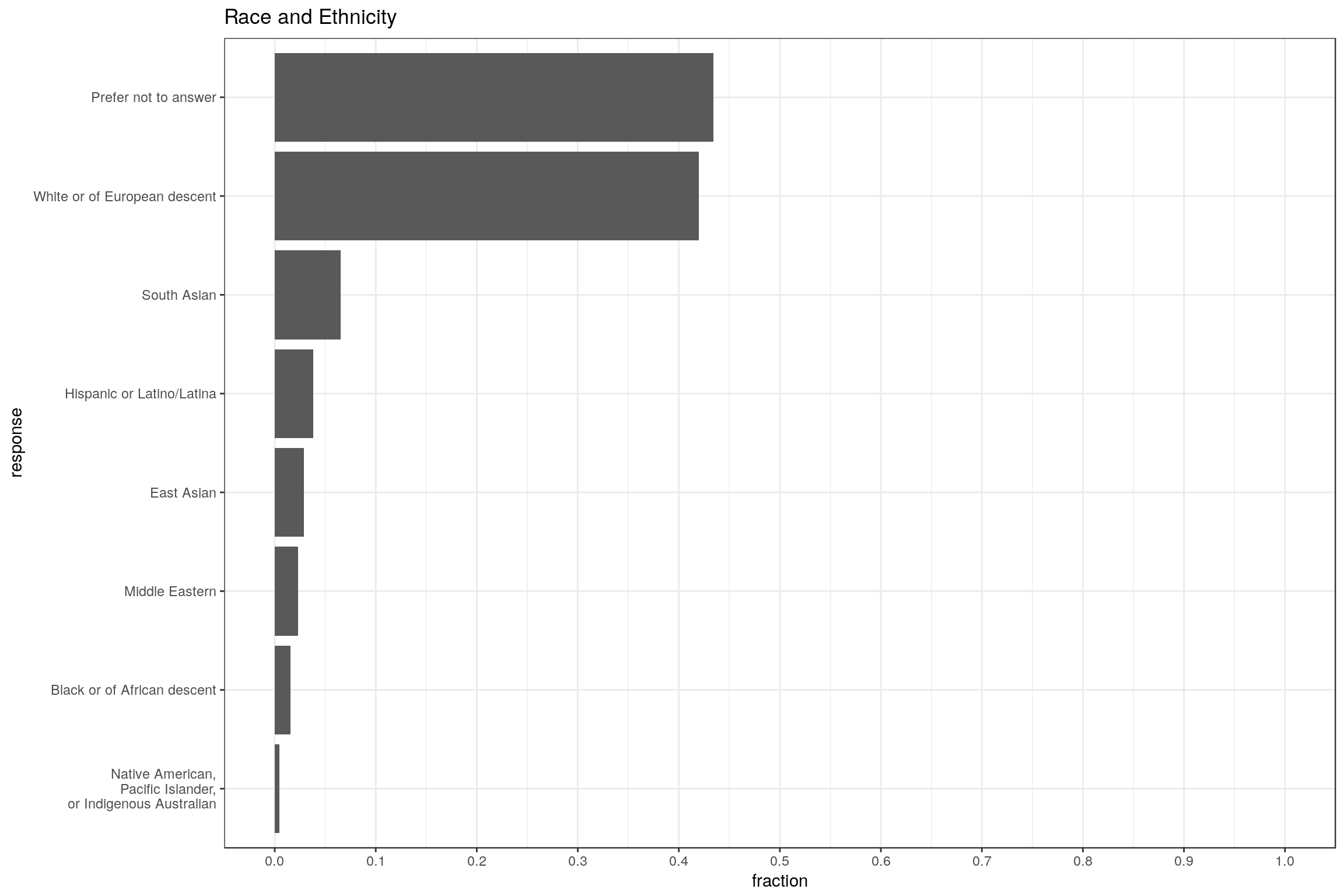 and at least somewhat uneasy about questions regarding gender

Without independent confirmation (like follow-up survey) extrapolating missing data to whole population is hardly justified. Furthermore geographical distribution of respondents, with over 23% from Asia and 2.8% from Africa (that's truly disheartening number, but likely reflecting wider systemic problems, much larger than SO community) suggests that at least ethnicity data is a bit more complex. It is also worth pointing out that to verify problems with [race and ethnicity] diversity and inclusion we should provide expected distribution, reflecting geographic distribution of respondents (naive projection, let's say on US census data, would suggest strong positive bias towards Asian population), in case there is no bias.

This of course just another narration, which frankly speaking reflects my own opinion that questions this highly intrusive (no matter if you refrained from answer or not, you leak sensitive personal information, especially in presence of additional data), but I believe it is worth discussing.

Please don't get me the wrong way - there is enough independent evidence for different inclusion problems in overall industry, but extrapolating US data to explain worldwide survey, might not be the best approach. At the same time, if we acknowledge inclusion issues, we might suspect there will be some effect on respondent willingness to answer, and additional caution when analyzing collected data, would be advised.

It is also worth noting, that independent of the actual underlying distribution, the current choice of representation can have unintended chilling effect on prospect users, especially those, who already feel vulnerable. Not welcoming is one thing, not welcoming bunch of self-identified white straight man, is well...

Of course without independent data it is just a hypothesis, but maybe one we should consider in the light of recent discussions.

Before I start, forgive me. I'm going to mention a clearly political discussion in the post. I do so not to raise political issues, but because the reasoning presented in that discussion is directly applicable to the claims being levied against SO's community.

I became aware of this logical fallacy because Thomas Sowell (himself not white) pointed it out in an interview some 40 years ago. Some relevant quotes:

So what are reasonable conclusions given the evidence we have? We have a difference in statistics. As the question points out, the stats as presented elsewhere conveniently leave out non-respondants, but let's assume that data without it is still representative. We also know that a significant portion of users do not make their race, gender, or other personal information readily available. We have a fairly strongly enforced Be Nice policy that demands respect for each user. This evidence does not immediately suggest that racism and sexism are major forces in our community. While of course these attitudes do exist in some measure worldwide and in every community, it is not reasonable to immediately jump to them as an explanation when most users can't even tie those qualities to a given account. In light of how hard our community works to treat people fairly and with respect, we should not entertain accusations of unfair treatment without sufficient evidence.

As long as we are courteous, sincere, and helpful to all comers who reciprocate those values, we have nothing to apologize for. We should not base our community policy on trying to make people who want nothing to do with Stack Overflow's model like us. We should base our community policy and norms on treating people decently (which we have already done for as long as I have been a member) and on whether we are successful at creating a knowledge repository.

I get that this is a very controversial topic. But in my honest opinion the only way to fix these kinds of "problems" is to simply ignore them.

These kinds of things are problems because people make a problem out of it!

I'm by no means a specialist on this topic. But gender diversity is a "problem" in many fields some have 90%+ females others 90%+ males. Yet when it comes to IT people make this same problem way bigger as it actually is. That too drives people away from the field.

My point is don't give these kinds of problems too much attention. These kinds of discussions usually just drive groups of people away from each other. Especially on the internet!

Not the answer you're looking for? Browse other questions tagged discussion survey survey-2018 welcoming .

414
Stack Overflow Survey: You're still spending too much time focusing on demographic groups, and not enough time improving site mechanics
252
What examples are there for Not Being Very Welcoming?
81
Is the intensity of meta working in our favor or to our detriment?
29
What about non-respondents to diversity questions?
4
Where I can submit my feedback about 2018 Developer Survey results?