Declined flags should not be declined

As I found no other way to "fight" against all of my declined flags, I will do it here and explain why I think that none of the declines are correct.

Here you can see my declined post flag, which I issued on this post. Sadly I cannot put up an extensive argument for this one because I do not have the ability to view deleted posts. So this post was deleted and that after it got at least four down votes.

Whatever was wrong with this post will always match "very low quality" by my guess. The posts that typically get a load of down votes in the first minutes are never very well written or understandable. Even if this flag was not 100% accurate and I might have been better off using a different flag, I still think that this is no reason for decline because this post was obviously not deleted for fun and got four down votes. That I flagged it at all should be valid enough and if I could see what the actual post was again I am pretty sure that I could make a good argument to why my flag was appropriate and maybe it is even obvious and the decline was completely off.

Okay because this comment still exists, which I find absolutely ridiculous, I will have to include it here to explain my choice of flag. 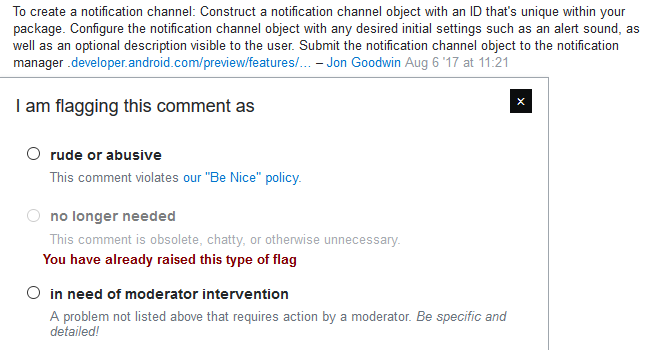 To understand the context you will have to take a look at my original question.

This comment does not make any sense at all. So first of all, even if the comment was valid concerning my question, it should have been an answer. Now we come to the better part because the comment is completely off-topic. I never asked for "How to create a notification channel in Android", which this comment is answering.

So this comment is first of all an answer and secondly it is off-topic. In the above image you can see that there are only three broad options to flag a comment. None of the three accurately match what I just explained. The comment is neither "rude" nor "abusive" and also it did not "require[] action by a moderator" because if anyone had ever looked at the actual question it would have been totally obvious that the comment is inappropriate! Though the comment is in fact not needed and that is why I chose that option. For this one I hope that not only my decline will be removed, but also that comment.

Both flags were correctly declined.

In the first case, "very low quality" flags aren't meant to be used on garden-variety bad posts, nor as some sort of super close vote. They are meant for truly exceptional cases:

Only flag posts as "very low quality" when there's no chance of salvaging them. If a post looks like someone pounded their keyboard, or like it was run through every language in Google Translate before submission, go ahead and flag as VLQ. This flag is only for posts that we can delete immediately without waiting on more input from the OP, so please only use it when you can't make any sense at all out of a post.

In the second case, "no longer needed" is meant for comments that are too chatty, or that point out issues with a post that have already been dealt with (for instance, suggesting an edit that was already performed). The technical accuracy of a comment is not a factor when using it. It is also worth mentioning that there is no ban on posting solutions as comments, even if it often a suboptimal thing to do, and being a solution is not a valid reason to delete a comment.

205
Should Stack Overflow moderators have a "standard of duty"?
10
Should I comment or answer?
13
Difference between very low quality and unclear flag

14
This answer should be deleted, 2 flags have been declined
23
NAA flags declined because the question should be deleted (but I can't vote to delete)
17
Can the text in the mod's canned response for declined NAA flags be changed?
5
What to do about a declined flag that was clearly valid before the OP updated their post?