Is it OK to use YouTube links in a question?

I've found a programming example in a YouTube video that I'm struggling to apply to my own programming challenges. Is it considered OK on SO to reproduce examples from YouTube and / or include a link to the same video?

I guess this question applies to most other external sources, but I'm asking about YouTube in particular because of the growing multitude of programming examples there.

For YouTube links the rules are the same as for any other external link in any post:

The content on the other side of the link should only provide supplementary information, which is not required to properly understand the question.

Posts (either questions or answers) need to be self-contained, and do not require visiting external resources to be understood. Users should not need to visit another site (link could be dead, stale or broken; the content on the other side may be unsavoury or NSFW in some way; it could be spammy... and there is simply no way to know without actually visiting the link. Which many will reasonably want to avoid).

If removing the link makes impossible to answer your question, then your question is liable to be closed as off-topic (and downvoted in the process).

If removing a link makes your answer useless, it will flagged as "not an answer" and deleted.

The fact that we are talking about YouTube doesn't change the rules about links to external resources in posts.

I would strongly advise against relying on videos to present the problem in your question, if you expect to get an answer, that is.

Video is generally a very poor resource to reproduce a problem for the following reasons:

If it was up to me, I would completely ban all videos related to software-development everywhere on the internet, but unfortunately some people still produce such videos, thus forcing people to use them, instead of a text description.

For the people claiming that the problem is that it relies on off-site resources, this is only the smallest of their problems. If a question uses a snippet from a gist on github, an editor can simply fix the question by copy-pasting the snippet into the question. With a video, an editor would need to spend very much effort to properly transcribe the video into text to fix the question.

So NO, don't use videos in your question, unless there is absolutely no other alternative source.

Additional note. After deciding what you want to do based on the other answers, if you absolutely must post a video, please make the link to YouTube begin at the relevant point in the video.

You can do that with YouTube's Copy video URL at current time (context menu). 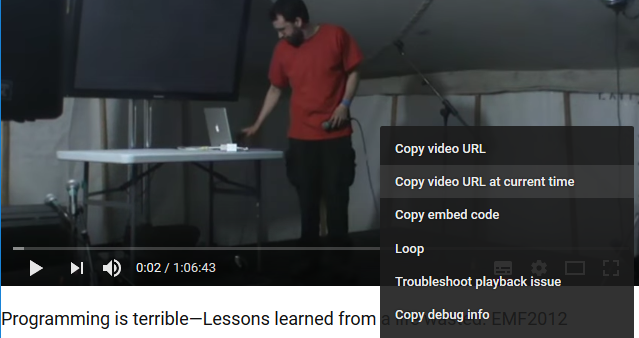 Another point - streaming video is bandwidth-heavy.

This might not seem important to those who can watch the video on their 'free' work connection but, if you are on a mobile/tablet 3/4G link, you are probably subject to a data cap, and blowing it on an SO-linked YouTube video that stands a good chance, (going on non-video questions), of being a waste of time, can be costly.

We already get too many imgur jpegs of homework dumps, the thought of moving homework with sound is pretty gruesome:(

No video by request.

-26
Can I ask a question in the form of a video?
-9
Links in the question
7
I'm following a YouTube video
2
Are external files in already MCVE questions valid?
61
Should a question that is meaningless without viewing an external link be closed?
22
Is it ok to link to material of dubious legality?

18
Can questions containing a code dump be considered as VLQ?
5
How to address inconsistency between Title, body and tags?
29
Am I allowed to ask about cracking a forgotten Ethereum wallet keystore file password?
30
What is the true intention in the "How to reference material written by others" article in the Help Centre?