Is Stack Overflow considering the implications of posting the results of their Developer Surveys in the manner that they are being posted in?

Also consider that the users who took the survey were all self-selected and tended to be users of Stack Overflow, I'm not convinced that you can take any useful data out, if you want to learn about the broader software development community. It's probably useful to people who want to learn about the Stack Overflow community, however. It's very unlikely that the results are truly representative of the broader software development community because of the lack of rigorous sampling applied.

My biggest concern is that various outlets are picking up this annual survey and presenting it as a representation of the state of the software development community. This is absolutely not true, and I don't see any clear warnings on the survey results page itself about how to properly interpret the results. I don't want to say that this survey is bad, because it does offer interesting insights and can launch some deeper thinking and investigation. But from what I can see, the results are often being used or presented improperly by third parties.

I don't think you can stop everyone from cherry-picking results or twisting data around, and I don't think it's even fair to ask that. However, I do think that there should be more information at the beginning of the survey results page that talks about the limitations of the survey.

Each year, we ask the Stack Overflow community about everything from their favorite technologies to their job preferences. This year marks the eighth year we’ve published our Annual Developer Survey results—with the largest number of respondents yet. Over 100,000 developers opted to take the 30-minute survey this past January.

{{ With some data analysis on visitor demographics vs survey results, perhaps say how representative this is of the whole SO community. If there are any recent enough other surveys, talk about how representative this survey is of the global population. Be clear: Does this survey accurately represent the SO user base? How well does it represent the global population of software developers? Be sure to cite the estimates 18-23 million global software developers (or more recent surveys, if any are available) as well as the number of active Stack Overflow users during the survey timeframe. }}

This year, we covered a few new topics ranging from artificial intelligence to ethics in coding. Here are a few of the top takeaways from this year’s results:

Want to dive into the results yourself? In a few weeks, we’ll make the anonymized results of the survey available for download under the Open Database License (ODbL). We look forward to seeing what you find!

Thanks for this thoughtful feedback! My belief, as someone who worked on this survey, is that there is a lot that is useful to be learned from it, both for the Stack Overflow community and the tech industry as a whole, from underrepresentation of certain groups to how technologies are used together.

However, it is so important to understand a survey sample's biases to interpret it correctly; from this feedback and others, we saw that we had improvements to make. We have updated the main Insights site based on this; the "Overview" section is still the same but discussion is updated throughout to be more clear about what the sample is.

It's unlikely that any amount of such additional writing would make a significant difference, unfortunately. In the modern day, most article writers understand survey methodology not at all, and make no effort to adjust their writing based on any sort of qualifiers. As someone who works in the field, it's quite frustrating.

That said, there are both good and bad things about what Stack Overflow does here. They clearly explain the methodology, including reasons for excluding cases, and they explain specifically who is included. Any competent survey statistician could take the data here and generate appropriate weights to make this approximate a representative sample. They also clearly explain how they recruited respondents, so someone could understand how well this is likely to represent the population due to methodological reasons. The methodology section of this report is as thorough as most survey methodology reports I've seen, even from much more rigorous surveys.

They don't use weighted data in their analysis, which is unfortunate, but it's likely because of a fundamental problem: how do you determine the targets for weighting? Likely, this survey is the largest of its kind - certainly the largest I've heard of - and thus there really isn't anything you could weight to. It would be nice if there were comparative weights, perhaps, that held some changes in demographics static from year to year so that other year to year comparisons could be made - for example, use last year's nationalities as a weight target, so you could see how salaries have changed irrespective of nationality - but that's probably beyond the scope of the basic analysis here. It's not like there is a census that one could use for targets, or even something along the lines of the American Community Survey (which is often used for things like this) at the international level.

Realistically, I don't think there's a lot more they could do to affect how this data will be misused. It's probably as representative as it could possibly be, and the extent to which it is not representative is relatively easy to understand from the methodology section.

People should be able to discern that the likely respondents are Stack Overflow users, that this is a small representation of the global programming community. The survey is clear how many people take the survey, it doesn't purport to be a peer reviewed article.

You're never going to stop people from cherry picking results from surveys or twisting results to suit their perspective. This is something we have to deal with in all walks of life, not just here. If you find yourself up against an employer or peer misquoting the survey results, you can explain your reasoning for this, maybe, not being an accurate representation for the programming community at large.

None of this means that the survey is not useful. The results are interesting and probably indicative to some extent of global programming trends (but don't hold me to that, I haven't checked out other surveys or research). 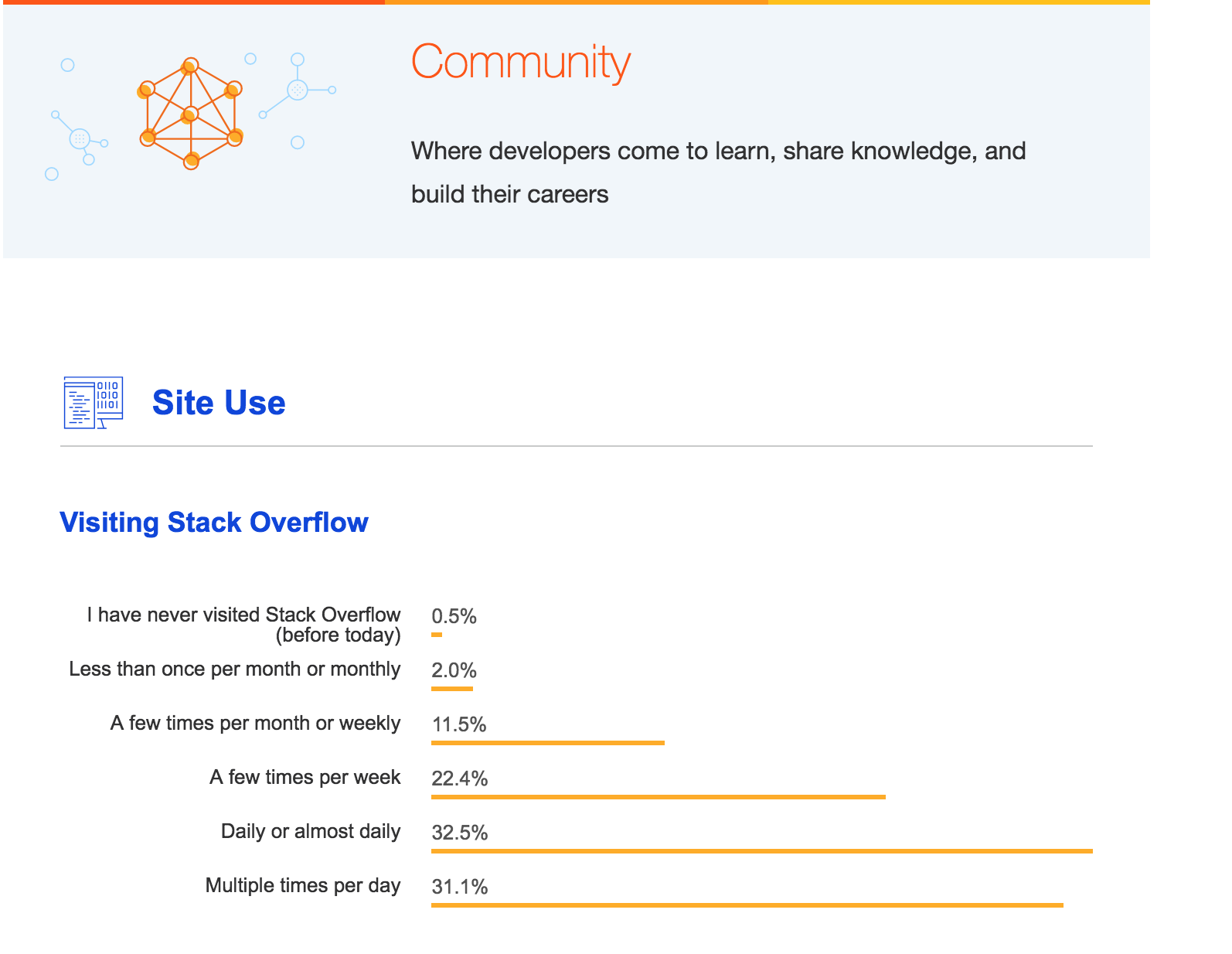 Mind you after seeing this pic of a dog with a piece of ham on its face... nothing would surprise me.

168
Please be more careful when interpreting the SO Developer Survey