Yesterday when checking my reputation in the toolbar, I noticed a -10 as a result of a user being removed. 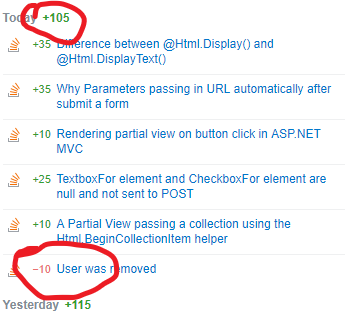 I then checked the reputation tab in my profile which showed a different total, and included an additional -10 (for user removed) and a further -10 as result of a question I had answered being removed by Community

Is this a bug, or am I just not understanding how the results are displayed?

The achievement box does not include votes for deleted posts.

There are basically two logs being kept that affect your reputation:

Between these two logs, it can sometimes be confusing to work out how your reputation changed; you can end up with days on your reputation tab that give you more or fewer points for a given day than could otherwise be expected given the reputation cap or the minimum reputation limit. On balance the tally is always accurate, as later events in the changelog will show the loss or gain of reputation discrepancy in the form of 'removed' events.

The achievements box is special in that it prefers showing you the positive changes from the change log. For example, the number on the box in the bar only shows positive deltas since you last looked (so downvotes and vote invalidations are 'delayed' until you have a positive delta again). In the same vein deleted posts are not shown; even the original upvotes on such a post are removed. Like the reputation tab, the tally is still accurate, but the number of entries shown in the box is limited so it is not always clear that it is.

Do note that the reputation tab doesn't show deleted posts either, not by default. You need to tick the show removed posts checkbox at the bottom to see events for removed posts. I suspect that if you unchecked that box, you'd only see one -10 User was removed event there too.

13
The reputation tab shows that I have earned the [c] tag badge two times
191
"Serial upvoting reversed" makes reputation suspect for employers
31
Unaccepting answer due to serial voting
11
Why does this user's account have rep points seemingly out of nowhere?