Should we get rid of the quality-control bans (post bans) in Stack Overflow for Teams?

While testing out Channels (now known as Stack Overflow for Teams), we downvoted all the posts of a user and made sure that they got answer banned. 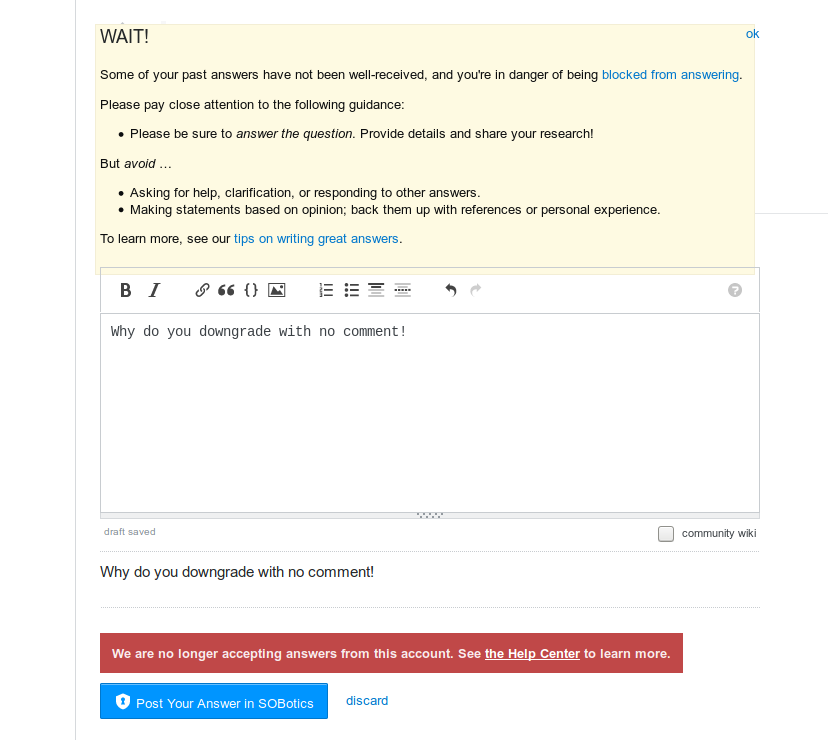 Does it make sense to have quality control bans in a private channel/Team?

Consider the scenario where there are three employees who craftily plan to downvote their manager's answers, so that the manager gets answer banned. Shouldn't this be prevented?

There would be moderators on the channel, but again, moderators cannot reverse these quality control bans. Similarly moderators can't see who voted on a post, so it is virtually impossible to detect these kinds of incidents.

Can we get rid of the quality control bans on private channels and/or restrict them to company policy?

This has been fixed! We've removed most quality control bans from Teams.

This seems to be an XY problem. If you have a Team channel that actually develops issues with voting rings against management or anyone else, what you really have is a dysfunctional team. A better solution for such problems would address the reasons for discord within the team, not simply slap on a bandage by disabling a quality control system.

If employees are constantly pulling the fire alarm and triggering unnecessary evacuations of your building, what do you do? Certainly not remove the fire alarms! You need to handle this in a different manner - find out why they are pulling the alarms, train them when it is appropriate to pull it and when it should not be pulled (e.g. "If you see someone smoking in the bathroom, don't pull the fire alarm, file a Form Conduct-1-SMK behavior report with the Office of Social Skills Retraining Center, Floor 3."), fire employees who refuse to stop their false-alarm triggering ways despite retraining, etc.

If interpersonal issues have been handled within a Team but certain users are still being consistently downvoted to such an extent as to move them into post-ban territory, then perhaps the problem is not a voting irregularity at all - maybe the contributions of the person(s) being downvoted really are low quality and need to be addressed as such. That is, maybe there really is a fire and it is time to evacuate the building.

I mostly agree with Robert's answer, but I have one objection:

The issue is that an answer ban is very, very difficult to lift, as I understand it.

Maybe you do have a dysfunctional team member that everyone downvotes. You have a long team talk, he learns the error of his ways, but now he still can't answer although he has improved. Revisiting all those bad answers and improving them, and then waiting for the ban to slowly lift is an intensive effort, as I understand it.

Of course, in a well-functioning team, dysfunction is likely spotted before someone is answer-banned, but still...

Imo giving moderators control over quality control bans makes sense in teams. That way, you can lift bans easier and quicker, and that would likely help with getting a dysfunctional team member back in the game.

We're going to need to see how things play out once we have more than a 'dozen or two' active teams using the product. Another question might be (and this has come up internally):

Getting down-voted on our team feels super passive-aggressive to me, damn you people can't you just fix my answer if it's so wrong? Aren't we all paid to help out here?

Stack Overflow has voting and a ladder of moderation tools to climb for the express reason of lacking any other social contract with folks it knows nothing about. When you work in an organization, that assumption is often turned on its head.

The q-block is just one of many things we've bolted on to the public site as we found a need for it that probably doesn't make sense in the context of a small organization where some other social contract to not burn everything to the ground exists.

As we get more and more into actual use testing and getting a bunch of feedback (and, have some of our best moderators and seasoned users poking at stuff) we'll have a pretty good list of what's never going to make sense in the context of a team, and what should be left optional to the team admins.

The ability for all or none of it apply will still be within the underlying channel that supports all of this, it's just the bits that get to run that might be different.

I can't wait until a team can't post because the spam system has them ensnared. That's going to be such a fun conversation to have :)

We are looking at removing many of the rate limits, filters and bans on Teams. As I wrote in an internal document:

Stack Overflow has many restrictions on asking because of the sheer volume of traffic it gets. Many of those restrictions are inappropriate for a small site. We can safely ditch the 6 questions a day and 50 in 30 days (rolling) limits. That’s a lot of questions from one person and will easily overwhelm a tiny site. But I expect social limits will work better than an arbitrary limit [on Teams]. If someone wants to ask seven questions in a day and they are good questions, I don’t think we should stand in their way.

Question bans might seem like a limit to remove, but I recommend loosening it instead. The model for this is Meta Stack Exchange where we give users significant leeway before banning them. It is possible to recover from these bans and they are less draconian than outright suspension. In essence, it’s a defense for people asking nothing but junk questions. The system can detect the pattern of downvoting and first warn and then block a user from asking more. I expect this will be a rare edge case.

Now that bans are one part quality control and one part early warning system. On Teams I don't expect people will see the same sort of quality problems we do on public sites. But there's still a use for notifications from the system that other people on your team aren't finding your questions particularly useful.

Originally I agreed with the premise of the question. Quality filters in Teams might be counter-intuitive, and serve to frustrate and confuse large organizations with hundreds or thousands of users.

However...in your example, that team is much smaller and not as formal. Sure, you know each other, but it'll never be on the same pedestal as a big company.

In light of that, it's simpler to keep the quality checks in place rather than to disable them on a case-by-case basis.

Permitting moderators to reverse those bans would be useful, though. At a minimum, this prevents the scenario you describe and would serve as valuable documentation should HR ever need to get involved. (It'd also save team operators a headache.)

Not the answer you're looking for? Browse other questions tagged discussion feature-request status-completed post-ban stack-overflow-for-teams .

2
Remove the quality filters from Stack Overflow for Teams, or allow Team Admins to remove post-bans
91
Why are there so many bad questions?
53
What can I do when getting “We are no longer accepting questions/answers from this account”?
13
Most of the moderation links on Channels link to those on Stack Overflow instead
10
Why am I seeing different theme in Stack Overflow
3
How do I leave a team