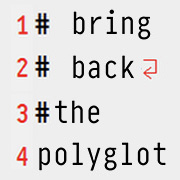 14
The new Meta Stack Overflow has the same skin as the old Meta Stack Overflow
23
Improve the "404 Not Found" error page for deleted questions
21
Review on rejected edit
104
Why was the 404 page changed to not include the "program"?
26
Recommend Network Engineering for Professional Network Questions
108
Add support for Flutter/Dart code snippets
2
Are questions seeking an explanation for a concept related to a problem acceptable?