How did a user receive 1000 reputation for a removed post?

I saw user who scored 1020 reputation in this week, so I checked their reputation tab. There, I noticed a strange reputation entry; they received +1000rep for a removed post..

I thought they may have offered 1000 reputation bounty for a post, and due to the removal of the post the reputation was refunded to them. But seeing their "bounty offered" page, there is no entry about such a post.

So if the post was indeed removed would the relevant information be also removed from the "bounty offered" page?

The queried reputation is: rep

I do not have 10k reputation to see the removed post or its timeline.

Can anyone tell me what the actual reason behind this +1000 entry is?

Update: As of February 13, 2018, this situation should not occur, and the user's reputation has been recalculated so that they haven't earned reputation from it. The feature request described in the last paragraph below has been implemented - reputation is no longer refunded if the awardee gets to keep it, per the second paragraph below. Also, previous such refunds that no longer qualify under the new rules have been revoked.

The reason why the answerers didn't lose their 500-rep bounties is because of a special rule in the system: if an answer has a score of at least 3 and has been visible for at least 60 days, any reputation change from that answer is kept upon deletion. This is intentional, because when an answer that meets those conditions is deleted, it's usually for reasons unrelated to the answer's quality.

There exists a feature request on Meta Stack Exchange to not refund bounties upon deletion if the awardees would get to keep it due to the above rule. 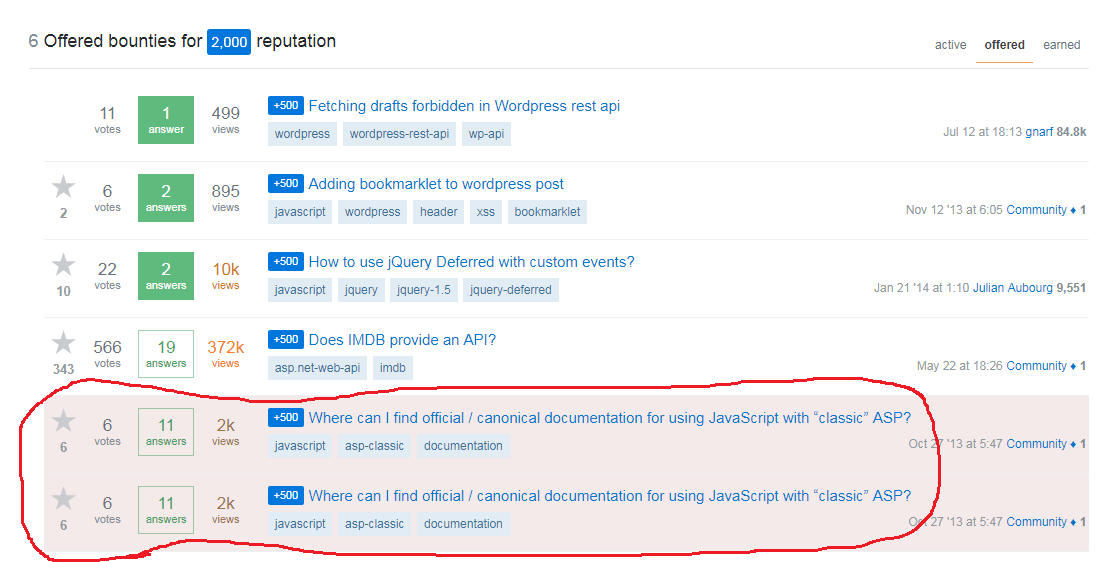 Not the answer you're looking for? Browse other questions tagged support reputation .

10
Why did my reputation increase for 'removed'?
36
Voting history statistics request
54
For “User was removed” event, why are editing reputation points rolled back? It can be sort of unfair?
105
Reason for loss in reputation
5
New vote rep sticks after deleting post
4
Post removed reputation increase
25
Why did I not receive the reputation bonus?