Jon Skeet asked only 50 questions, but it shows 51/100 on his progress to Socratic 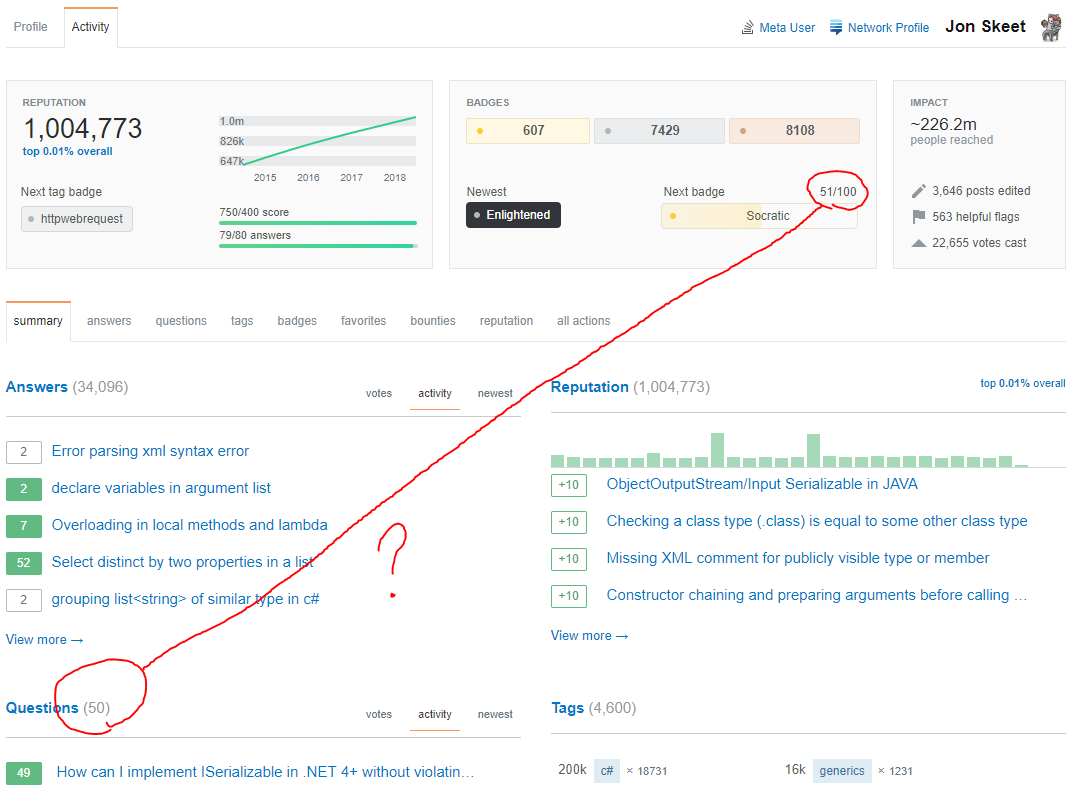 So looking into this a bit further, simply saying "closed" or "deleted" is not entirely accurate. The system actually checks that they were closed within 60 days and deleted within 60 days.

Now, I was aware of those criteria, but I thought the 60 days part only applied to calculating the score that needs to be greater than 0.5 in order to be considered a "positive question record" overall, and that any closed or deleted question did not count as a well-received question. That's... not true.

In reality, the 60 days requirement also applies to the count. So, if the closure or deletion of a question did not occur within 60 days of the question being asked, then it is permanently exempt from those two checks and (as long as its score is greater than 0) will always count as a well-received question even if it is closed or deleted.

That is why Jon seemingly has a higher count than questions that exist. Many of his early questions were closed and deleted long after they were asked, when the site's scope began to narrow. Those closures and deletions are ignored.

Not a bug; it turns out posts closed and/or deleted more than 60 days after posting count as well-received. So several deleted and closed questions still count.

Below is my original (wrong) post, but note that I updated my SEDE query to account for the 60-day exemption for closures; not counting deleted posts there are now 48 days counted, the deleted posts disqualify one of the 48 days but add another 4 qualifying days, making a total of 51 days.

It appears that deleted posts are being counted in the progress bar, while clearly they should not.

Just looking at the publicly available posts, Jon Skeet has asked well-received questions on 45 separate days; these are days on which Jon only posted questions where a) at least one has a score greater than 0, b) none have a negative score, c) none of these are now closed and d) none were deleted.

Jon also asked 7 additional questions that have since been deleted, which I as a moderator can see. Of these 7, 6 of these have been asked on days Jon had not asked other questions, but since one of these was asked on the same day as another non-deleted question was posted Jon really has only 44 qualifying days.

Not the answer you're looking for? Browse other questions tagged bug status-bydesign badges activity-tab .

183
What's the meaning of “well-received question” and of “maintaining” a question?
60
What does the Socratic badge definition mean?

5
Search only shows 6 results, but no pagination
24
The count badges on the activity tabs are breaking social distancing rules