How to find users with a certain set of badges?

Just out of curiosity, is there a way to do so? While the badges page shows how rare each badge is, it's interesting to see how rare are certain combinations. Like 3+ "Steward"s or Unsung Hero + Constituent or whatever.

If you want to select users with specific number of several badges you can use a pivot query to get counts per badge per user and then restrict the rows with a where clause.

This query does that for users with 4 Steward badges and 1 Unsung Hero:

When run today, this will be the result: 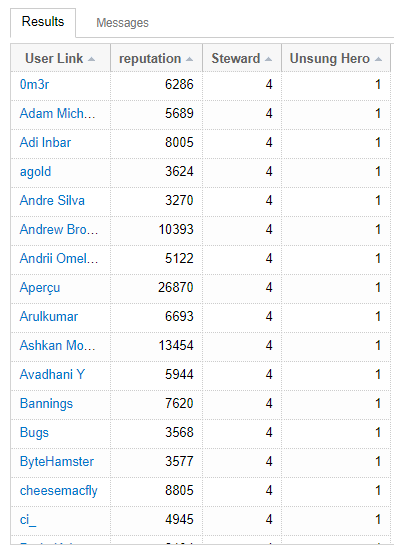 To have other badges or other criteria adapt the query by adding the column names that represent a badge name and the where clause accordingly.

I'm leaving the rest of this answer here as well as it has some useful bits, although it doesn't exactly answer the question

I felt this was an opportunity to abuse the PIVOT statement in SQL Server so I created this query.

When run today this the outcome:

It doesn't really show which combination of badges is rare but it feels that question is more suited for a statistical analysis package then a SQL query. Or I'm not that good with SQL after all.

You can do this with the Data Explorer. As an example, see the Users eligible for 2011 Stack Overflow moderator elections query:

Sure. You can author a SEDE query to extract the data you want.

Here's a simple query which shows users with the "Good Answer" badge. You'll have you adapt the SQL to fit what you're exactly looking for, though.

Not the answer you're looking for? Browse other questions tagged support badges search users .

68
How did this user earn the Suffrage badge (use 30 votes in a day) twice?
5
Is there any badges which has not yet been taken?

42
Can I find out how I got an Announcer badge?
22
Why can't you see review-badges in your profile-page until you've earned them?
9
Is there a way to see current progress towards a badge?
8
How to see total number of reviews in each review type