Why is this considered spam or offensive? [duplicate]

I failed an audit but I don't see why.

...It is abusive nonsense, noise, spam, blatantly off-topic or otherwise irredeemable – readers will find it offensive or repulsive rather than helpful.

How exactly is the post 'abusive nonsense', 'otherwise irredeemable'? or does it land on something else? 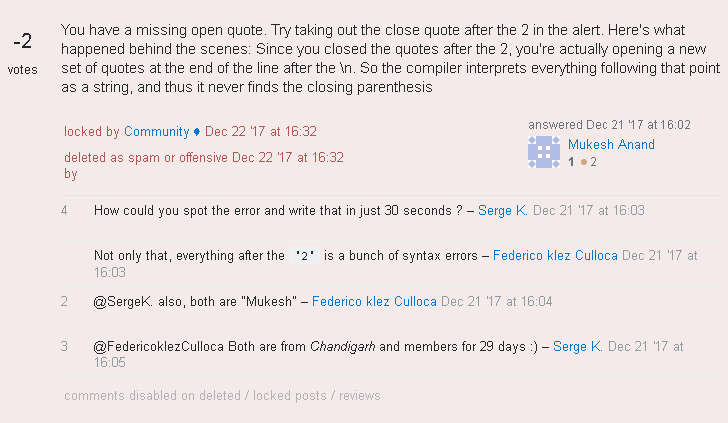 Since audits are chosen via an automated process, you'll get some bad ones every now and then. This is a poor choice for an audit, and you shouldn't be penalized for failing this one. The answer is a reasonable attempt to answer the question and non-spammy when considered alone, which it all that you should consider when in the VLQ reviews.

Even if there was indeed voting fraud or repetitions of posts, it is not your responsibility to hunt this down. In fact, the only way to know about the user's sketchy behavior is to actually visit their profile and manually go through all their posts, which can fringe on user stalking/serial voting. This is exactly the kind of thing moderators are elected to deal with.

That being said, if you had gone the extra mile, you might not have failed this (poorly chosen) audit. Reading the answer and its comments, it becomes apparent that this is a decent answer to an off-topic typo question. So if you had clicked the link to the question in an attempt to flag/close the question, you would have realized immediately that both the question and answer were deleted. This would have made the audit obvious.

Typically, there's an automated process that selects posts for reviews based on some set of metrics. Probably has to do with it's score, the fact that it's been deleted by the community users, or some other thing that has to do with it being poorly received.

The automated system isn't perfect. It can't really evaluate the post and determine whether or not it's really worthy of an audit in it's own right. Most of what it goes on is how the community treated the post in the first place, and sometimes that results in poor audits.

The reason It was poorly received the first time likely has to do with the fact that it's an ugly block of text, and that a casual reader might assume that it's commenting on some non-crucial element of the question, and not actually an answer.

Not the answer you're looking for? Browse other questions tagged support review-audits low-quality-posts .

30
What exactly is wrong with this deleted question?
535
There is no shame in using "Skip"
-2
How is this a bad answer?