Coming back from reviewing this particular case. The answer is copy-paste given to one question by, evidently, the same user under different accounts with 1 hour time difference.

Not to be nitpicking for the sake of it, but still guessing, is this better qualified as NAA or is it a form of abuse, considering 2 accounts / same answers? 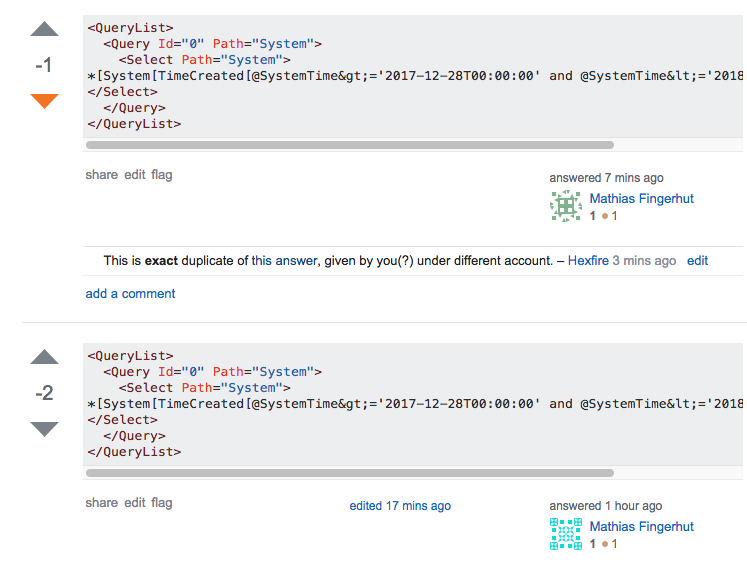 If you have to spend more than a few seconds thinking about it, it's probably better to just flag it for moderator attention and move on. As BoltClock noted in comments it's not uncommon for someone to become disenfranchised from their account which leads to strange things like:

... it can smell kind of off, but it's usually benign. Anyway, there's no way for you to know given the tools that you have, so let mods sort it out.

If it seems really urgent, use the contact link and let us know about it directly (ideally, after flagging it too).

75
How do unregistered accounts work?

16
Is there a way to accept an answer from another question?
11
How to deal with meta-duplicates (disparate problems with the same root cause)?
108
When I look at the review icon, I see red
47
Is it tools used ... "Commonly By Programmers" or "Primarily For Programming"?
10
Are attempts to answer a non-programming question NAA?
59
What is "Well i asked this question in hamework help section" about?
8
(Yet Another) Answer that is worded slightly differently
34
Discouraging questioners from posting data in table form for questions on R/SQL