Help new users understand why their post was downvoted

I am proposing a feature that would allow new users to understand why their question was downvoted. The system should show the owner of a post that has eg. a score of < -3 or a score of < 0 and at least one pending close vote/flag a message like this:

Some users downvoted your post because it is not clear enough. This are a few tips how to improve your post. 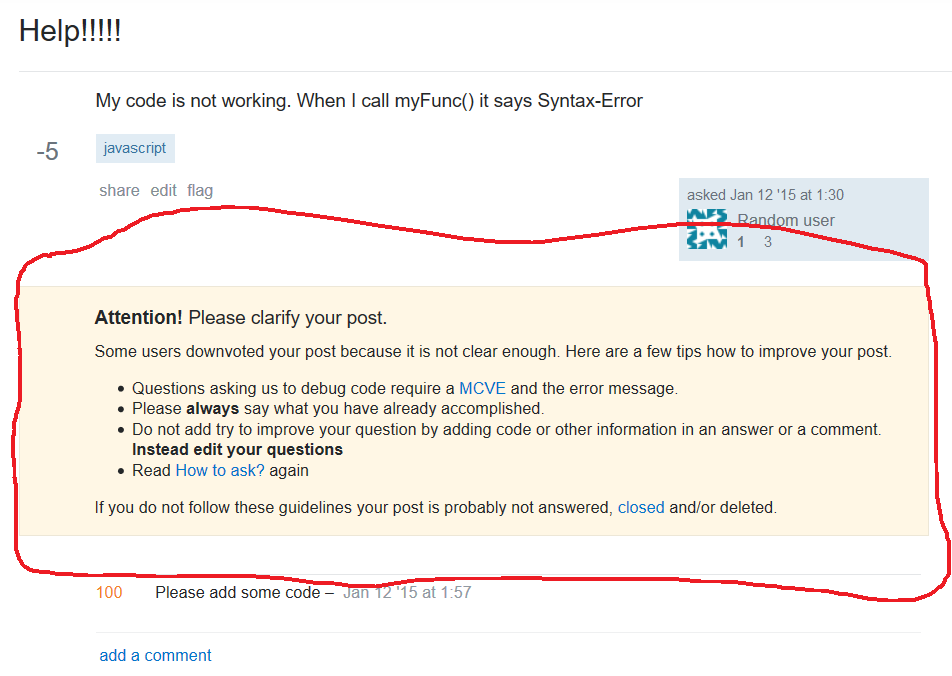 The same applies if the question is unclear, or otherwise lacking sufficient information for an answer.

If the user is posting information that should be in an edit in a comment or answer, then that wouldn't be the reason for downvotes, so telling them how to edit isn't really appropriate here.

Linking to the how to ask page is the only thing in there that would actually be merited, although I'm not sure how helpful it'd be. The user has already been shown that page before they were allowed to ask the question, and they either read it and it didn't help, or they've already made the decision to not bother accepting the help that we can give them, but I'm not fundamentally opposed to that bit of info being presented again in a situation where it's likely that the author didn't read it and needs to, even if I don't expect it will actually change anything.

There is already a great tool to help users know why you downvoted... the comment that you left when you downvoted (you did do that, right?)

In addition to leaving a friendly comment welcoming them to the site and reminding them that image-only questions are difficult for us to deal with, you may also provide a link to (e.g.) idownvotedbecau.se/imageofcode for further explanation, and to give them some next steps to improve their question-asking skills.

Not the answer you're looking for? Browse other questions tagged feature-request downvotes downvote-reason .

515
Why isn't it required to provide comments/feedback for downvotes, and why are proposals suggesting this so negatively received?
24
Help new users understand why their post was down-/closevoted - Version 2
240
Display a message to the OP the first time they receive a downvote

48
Prompt users to post errors instead of "I get an error"
10
How to improve question quality of new Stack Overflow users?
24
Help new users understand why their post was down-/closevoted - Version 2
208
Can we make it more obvious to new users that downvotes on the main site are not insults and in fact can help them help themselves?
15
Help center entry explaining how to post code or error messages