In Stack Overflow Q&As on Web-platform technologies (JavaScript, Web APIs, CSS, HTML), it’s quite common to see users adding links to MDN content (from https://developer.mozilla.org/en-US/) as an authoritative source. So might it be worthwhile to make it a bit easier for users to do that?

(For more rationale on why MDN in particular is worth singling out in a feature, read further down.)

As far as implementation, you can imagine something similar to the Insert Link to Documentation widget that before the SO Documentation expansion was sunsetted had appeared as an additional tab along with Insert Hyperlink in the pop-up shown if you click the edit bar’s 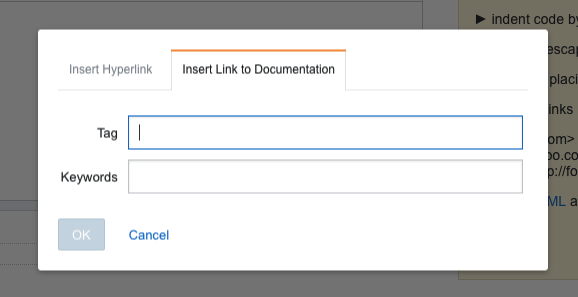 …except that this new widget would instead be titled Insert Link to MDN Web Docs (or such) and:

But regardless, as far as the MDN-specific part, a model for how that works is an existing widget MDN already provides in its own editing UI, which works like this: If you want to find, say, some specific CORS-related MDN article, the widget gives you a “lookup” box into which you type CORS, and then based on that lookup term, shows a list of article titles: 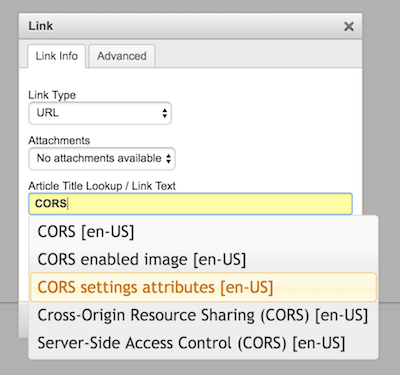 Select “CORS settings attributes [en-US]” from that, push OK, and it inserts into the article some markup for a link with the relative URL /en-US/docs/Web/HTML/CORS_settings_attributes.

A similar widget at SO would insert a Markdown-formatted link with an absolute URL and link text auto-generated from the MDN article title plus boilerplate indicating it’s an MDN link; for example:

The lookup data can be retrieved as JSON from an existing endpoint that MDN already exposes:

The structure of that data (in this case, the part for the main MDN “CORS” article), looks like this: 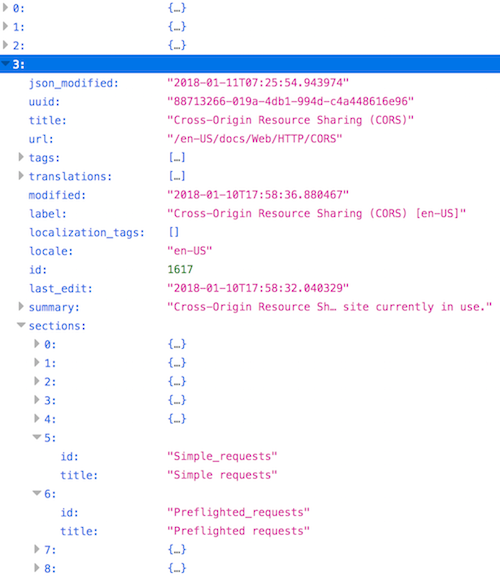 Notice that also exposed in that data are the section titles — so it’d also be possible for a lookup widget to provide a way to create a link not only to the article titles, but also to specific sections:

Anyway, all of the preceding is the substance of the feature proposal. The rest of what follows is just an explanation about what makes MDN exceptional enough to inspire adding the feature.

Why the special focus on MDN?

Of course given the wide range of programming platforms covered in SO Q&As, others may also have related widely-used high-quality documentation sites that would merit easy linking. But a rationale for providing some easier linking to documentation on Web technologies specifically is that the Web platform covers a lot of ground as far as programming technologies go — to the point that a pretty significant subset of SO questions and answers relate to Web programming

And within the field of Web technologies, as far as what’s exceptional in particular about MDN:

It's a thoughtful proposal, but I'm pretty indifferent.

The value gained, it seems to me, is just a few seconds saved per added MDN link. (Or Python docs link, or Microsoft docs link, or whatever, if this were to be expanded to other docs sites.)

The downside is that you've then made it easier for people to insert links to documentation they haven't even looked at. This is already a problem, and is the flipside of the common Meta gripe about question askers not Googling before asking: pretty much every good question asker on Stack Overflow has had the experience of asking a thoughtful question about some nuance of an API's behaviour that is not described in the docs, only to have some total dick come along and post "You should Google before asking next time! Read the docs at http://example.com/docs/useless-page-that-doesnt-help-at-all." So when you post a proposal that amounts to "Make it more convenient to post documentation links without even having to open the target page in your browser first to copy the URL"... well, it makes me a little nervous about the effect it's going to have on the relevance of documentation links that get included in answers.

The act of actually opening a docs page and copying the link is usually a small proportion of the time I expend per docs link in an answer. I'm probably also making decisions about what the right source to link to is (e.g. in the case of web stuff, should I be citing MDN or is this the sort of weird edge-casey question where I shouldn't be trusting MDN and should be directly citing the specification? Or in the case of Python, should I be linking to https://docs.python.org/2/library/csv.html#csv.DictReader or to https://docs.python.org/3/library/csv.html#csv.DictReader or to https://docs.python.org/library/csv.html#csv.DictReader?), and looking over the docs to see if there's a particular subsection that's most relevant that I should be linking to, and maybe copying a quote from the docs into my answer and spending the next minute fidgeting with formatting to make it look like it does on the docs page. Making the act of inserting the link marginally quicker just doesn't really register as an important possible timesaver, for me.

Even if I could snap my fingers and cause this feature to exist tomorrow, with no development effort required by anybody, I'm on the fence about whether I'd want to, because of the points above. If it means spending dev time that could be spent on something else, then I don't think it's worth it.

Not the answer you're looking for? Browse other questions tagged discussion feature-request user-interface help-center .

33
How to handle questions that have answers in the language's documentation?
138
Why not w3schools.com?
5
Can I replace a W3Schools link by another, authoritative reference?
12
Why does the [new-operator] wiki only reference C++?
21
How does pointing to an English MDN page instead of its Spanish counterpart deviate from the original intent of the post?