Why is this particular question downvoted? [duplicate]

Ask Question
Asked 4 years, 7 months ago
Modified 3 years, 3 months ago
Viewed 305 times
-23
This question already has answers here:
When is it justifiable to downvote a question? (11 answers)
Closed 4 years ago.

I asked my first question ever on Stack Overflow and it got two downvotes in the first two milliseconds, so I deleted the question to not receive more downvotes. I was preparing for that question about a week, I have read help center page and "how-to-ask" page, and I also took a tour through this community and I read everything about what is allowed and what is not allowed on this website.

I spent three hours writing my question and preparing it very well, but still I cannot see what is wrong with my question. So, I am therefore asking here: Why has my question received a lot of bad score in such a short period of time?

I strongly believe that my question is indeed on-topic, well-defined, clear and about programming.

In comments a moderator said that I should use a debugger. But, I have already in my question mentioned that I indeed used debugger, but it didn't help very much. While debugging the script, I noticed much nonsense stuff and then... alert(12345) appeared out of nowhere. It actually took more than 12 thousand debugger steps to reach the very end of the script and really I still cannot see why that script works like it does.

I am not asking downvoters to retract their votes, but I am asking the rest of the community to explain why is that question downvoted. Is it off-topic? If yes, what exactly from the help-center page forbids such question? Is it unclear? If yes, which part exactly is unclear? Is it something else? If yes, what and why?

Here is the link to the question I am talking about (10K+ only, it is deleted). 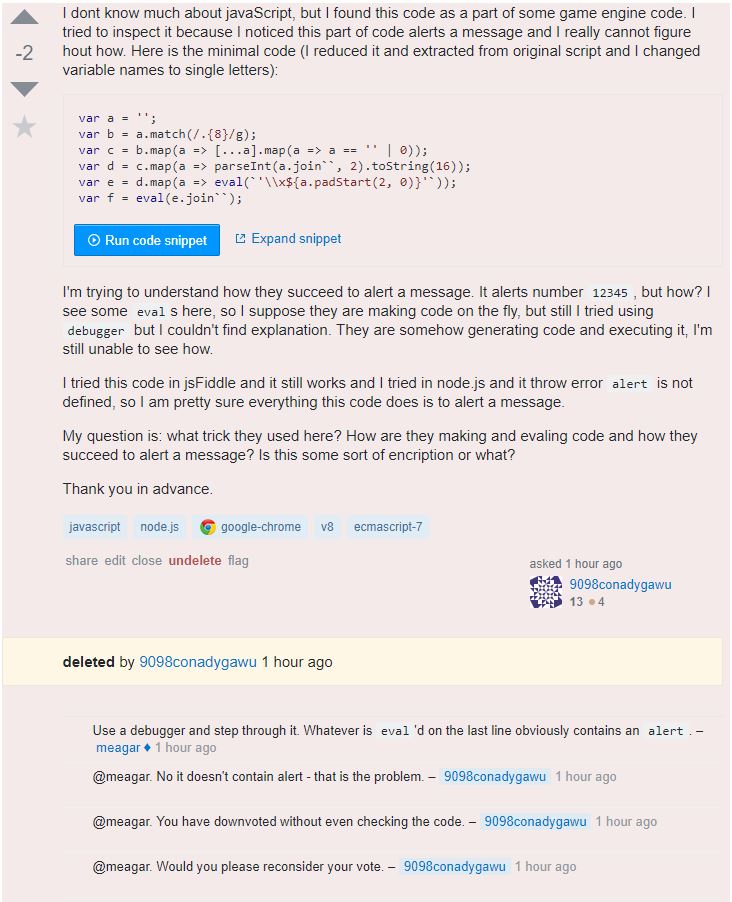 To avoid extended discussion in comments, here is a summary of my response.

I'm not a JavaScript coder, and so I can't criticize the programming content of your question, but I'm never usually fond of questions that ask for explanations of found code, as in my Java experience, they are best answered by debugging it and by studying (in depth) the appropriate tutorials. Again, I cannot comment regarding your code/question, but I've seen folks who have asked similar questions and who claim to have looked for a tutorial to explain something that does steps A-B-C when they should be looking for tutorials for each separate step.

There are a lot of questions asking about "Why does this code work like that", etc. It is really not always easy to debug code. Look at the one question I posted a link in this meta post. It has two upvotes, but I don't see why is that question better than mine. Or the one question linked from it, it has more than 20 upvotes, but it is asking the same thing "debug this code for me". Debugging is really not a trivial task, and today websites use a lot of advanced obfuscating techniques, making it very hard for developers to understand their strategy and how the code works.

Take a look at THIS question. It has 67 upvotes, but it didn't even talk about any attempt made from the OP. Why? Why has that question so many upvotes, while my question, full of attempts and explanations has -1? If it is not an injustice, then I don't know what is.

'first two miliseconds' don't know about that, but I was fairly sure you question was going to be bad after ~500ms.

OK, how it works from the perspective of an experienced SO user. This may be incorrect, but it's how I think when I read your Q:

'I dont know much about javaScript'

Right, by this stage, I'm 99% sure that your question will be getting a downvote and/or close-vote. It reads like: 'Here's my shield: 'My question is bad, but don't treat me badly because I'm a newbie'

I'm now 99.9% sure that your question will be getting a downvote and/or close-vote. It's not your code, and there may be a copyright issue. Assuming there is not, it's likely to be some over-optimized crap that needs a lot of work to take apart and understand, and you would prefer someone else did it. This is gonna be 'Too broad' if not 'Unclear'.

First line of question and it's already over...

Sure enough, it's a load of obfuscated crap that someone shoveled onto the net. OP wants someone else to work out how it works. It's going be of next-to-no use to future SO users/visitors. OP has shown no evidence of investigation/debug.

'so I am assuming each downvote should correspond to at least one comment' nah, the skilled and experienced developers who answer good questions on SO have little time to waste on explaining why bad questions are bad.

Vote-begging, implication of one-question-per account: 'I will delete this account soon, but I am asking for explanation why he didnt leave upvote'

Down and close vote for sure.

As it happens, other users got there first, so I didn't have to vote on anything except this meta:

Debugging is really not a trivial task, today websites use a lot of advanced obfuscating techniques, making it very hard for developers to understand their strategy and how code works.

Debugging, logging, tracing? No thanks, it's hard work, so I'll get somebody else to do it. I dont know much about JavaScript and I'm unwilling to put in effort on my own problems and so learn more.

Downvote on meta too:(

"De-obfuscate code for me" is not useful for future visitors and hence deserves downvotes and close votes.

Additionally, the post shows no indication of actual debugging - stepping through the code in the debugger (presumably you have real browser like Firefox/Chrome/Internet Explorer/Edge somewhere... if you are stuck with just Safari... you may search for console debugger for JavaScript) which asks for more downvotes.

Please note that there is no way to know what you did to investigate the problem without actual information in the post.

For example, I'd expect at very least a value that is passed to the first eval to be shown,

or even better result of that eval before the second one:

This way one would instantly recognize what is going on and suggest search terms like https://www.bing.com/search?q=javascript+square+bracket+obfuscation or duplicate.

Now at that point you are expected to start ... complaining that duplicates are not friendly - but that is another duplicate :).

Alexei LevenkovAlexei Levenkov
97.2k66 gold badges115115 silver badges161161 bronze badges
4
Add a comment  |
Welcome!
This site is intended for bugs, features, and discussion of Stack Overflow and the software that powers it. You must have an account on Stack Overflow to participate.
Help
Visit chat

419
When is it justifiable to downvote a question?

3
Possible to display a hint when the user is asking about segfaults without showing debugging effort?
1
Why was my question upvoted and became notable, when it was heavily downvoted at the beginning?
28
What should be done with this specific highly upvoted question asking how to debug a Node.js application?
5
Why was my neural networks question downvoted?
4
Why was this question about debugging an Android device closed and locked?
28
Can this question be improved to be on-topic?