This has happened a few times for me over the past week or so but this now it seems to be happening consistently: 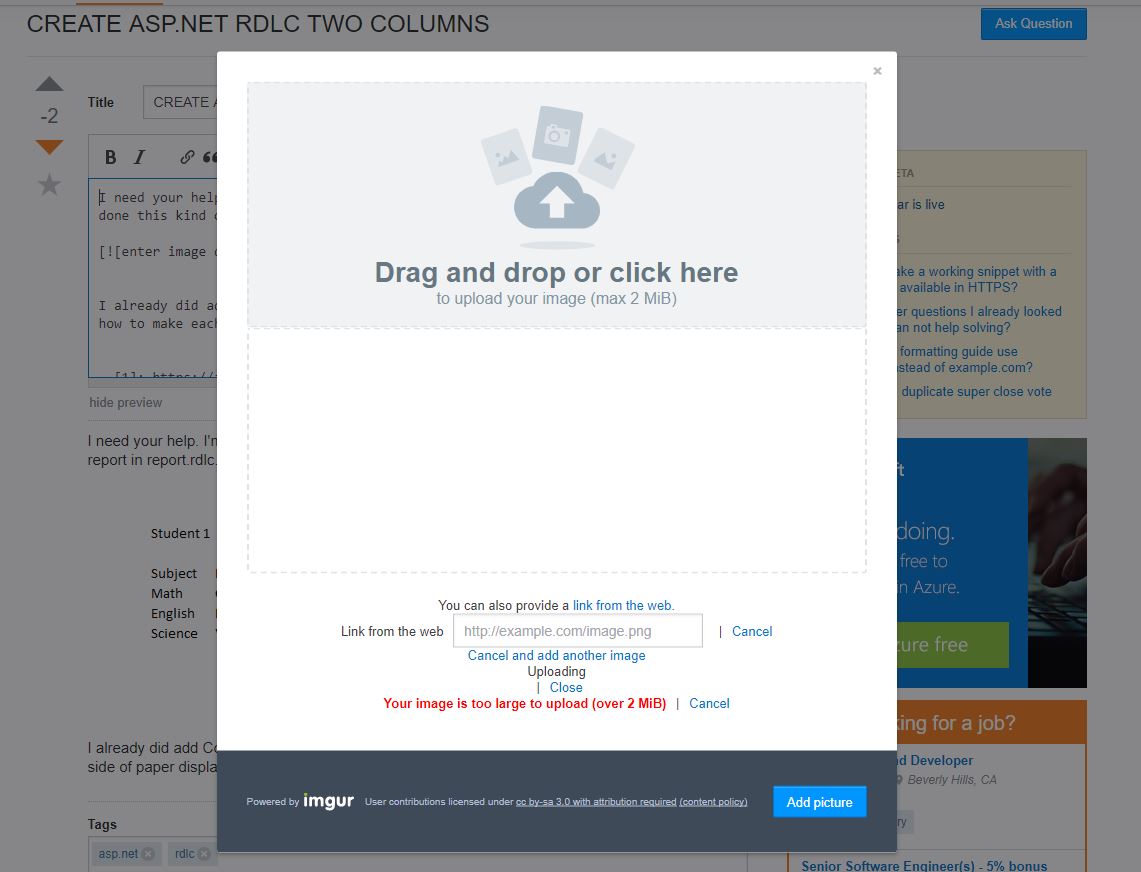 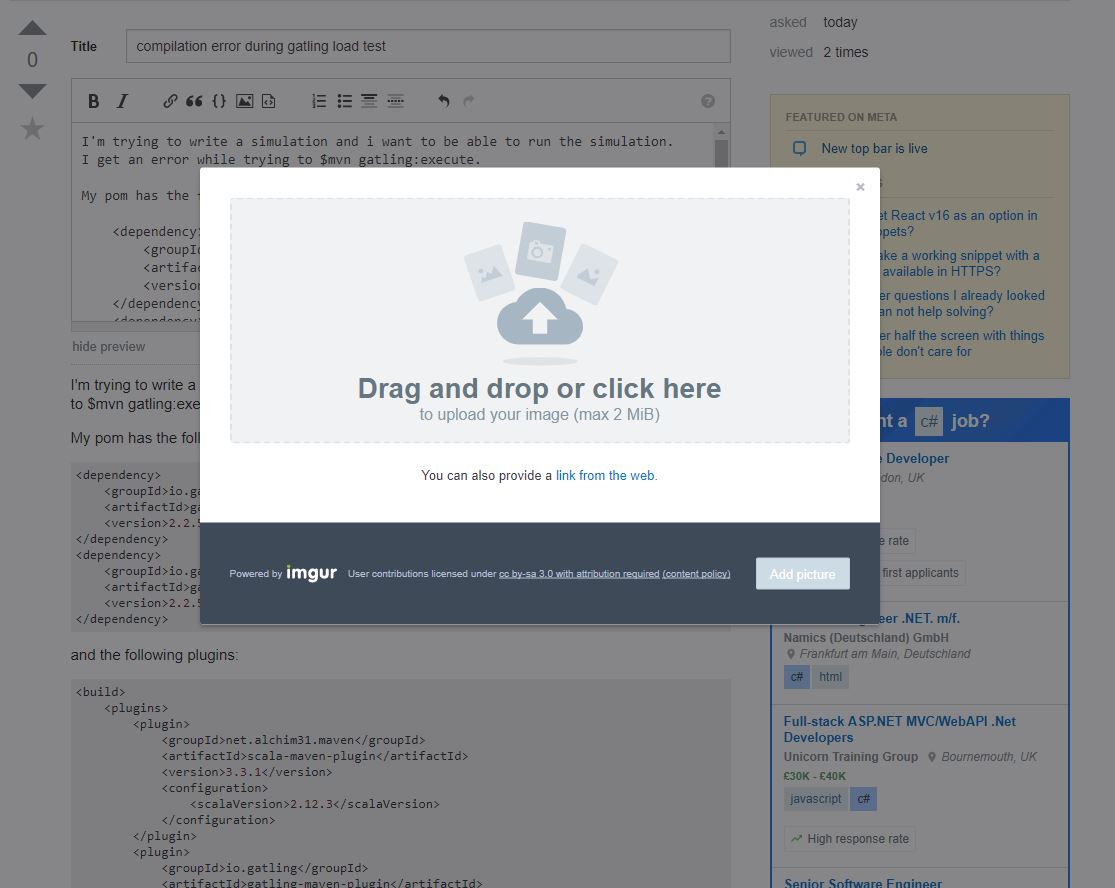 Though the question is similar to this issue I don't believe this is my virus software that's causing this issue. I have only seen this issue when being server the Microsoft ad (see answer). With different ad (different SE sites, etc.) the image upload works.

Fixed now. This was a fun one. Long story short: It wasn't Microsoft's fault, it was ours. If you're curious about the dirty details, here goes:

The ad is loaded in a IFRAME. The ad provider needs to communicate between the main page and the IFRAME, which means cross-origin communication. Since IE8 we've had the postMessage API to do that sort of thing, but that's a little too modern apparently.

So instead, in order to perform this communication, it's using a well-known hack (example) that uses window.name to talk between the IFRAME and the parent. It looks like this is used to send some blob of HTML over to the IFRAME; either way, the IFRAME's window.name contains a long string of stuff.

Once the IFRAME is done with whatever it needs to do, it's being a nice citizen and cleans up after itself, by setting its window.name back to the empty string. So far so good.

And now for something completely different. The image upload popup is loaded via a little JavaScript helper in our code called asyncLoad. This helper has an option called callback, documented like this:

In the case of the image uploader, this parameter is not null or undefined; rather, it's the callback that actually initializes the dialog (adds functionality, hides stuff that shouldn't be visible, etc.)

Now, as that piece of documentation says, the asyncLoad helper first checks for the data-after-load attribute, and it parses it as a period-separated lookup. Here's the relevant code:

Now what happens in the case of our image upload popup, where the callback parameter is provided but the data-after-load attribute isn't?

In that case, func is an empty string, thus func.split(".") is a single-element array [""]. So the for loop executes a single time:

Hmm. That doesn't exactly look intentional, but fortunately it works anyways. Because there isn't actually a property with the empty name on the global object, toCall is undefined, and thus after

toCall is actually our option-provided callback.

So while this sort of only works by accident, it works.

Well, it worked. Until this ad came along. Rember how I said that it cleaned up after itself by erasing the IFRAME's window.name?

Let me quote from the spec that defines named access on the window object, emphasis mine:

It turns out that Chrome ignores the part I've bolded. And thus because the IFRAME set its window.name to the empty string, the main page's window[""] is now the IFRAME (or rather, its WindowProxy).

Which is why toCall = window[""]; no longer is undefined, and doesn't get replaced by the callback parameter, thus the callback is never called, and therefore the image uploader popup is not initialized.

And because there's a typeof check, we never attempt to execute toCall (which is why you didn't see an exception in the console).

Here's the whole fix for this issue:

As I said, this was fun.

I've found what could be a consistent cause. I was testing with answering a question and inserting an image:

Fails with a Microsoft ad in the sidebar bar: 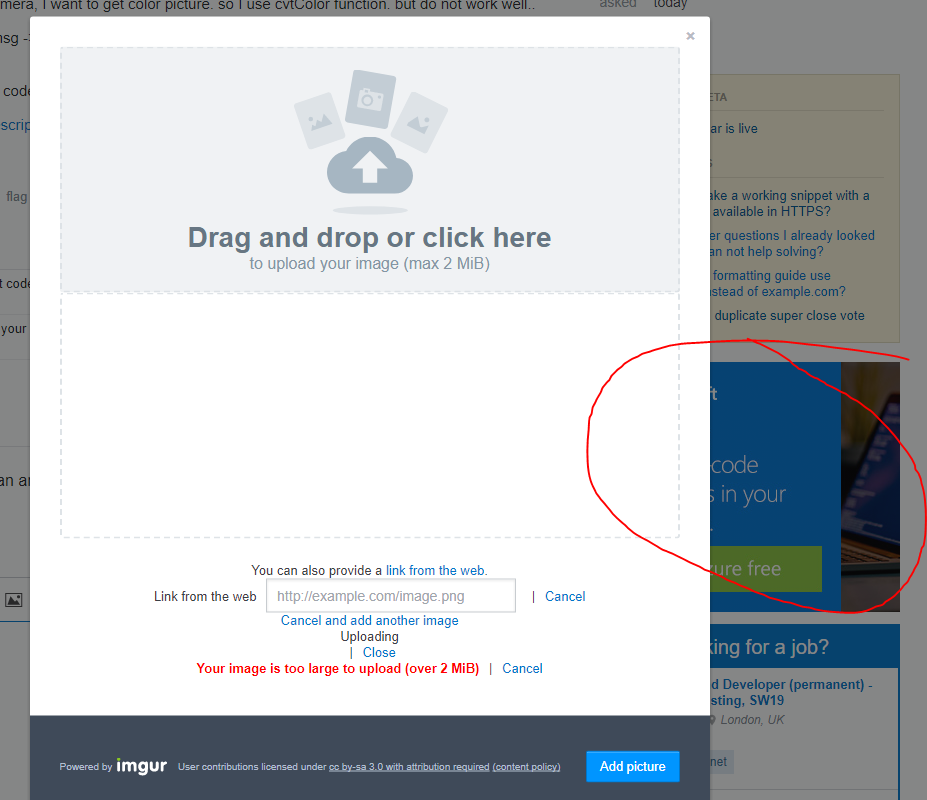 Refresh a page enough times until you don't see an ad in the sidebar and it seems to work. Reproduced in this scenario a few times now. 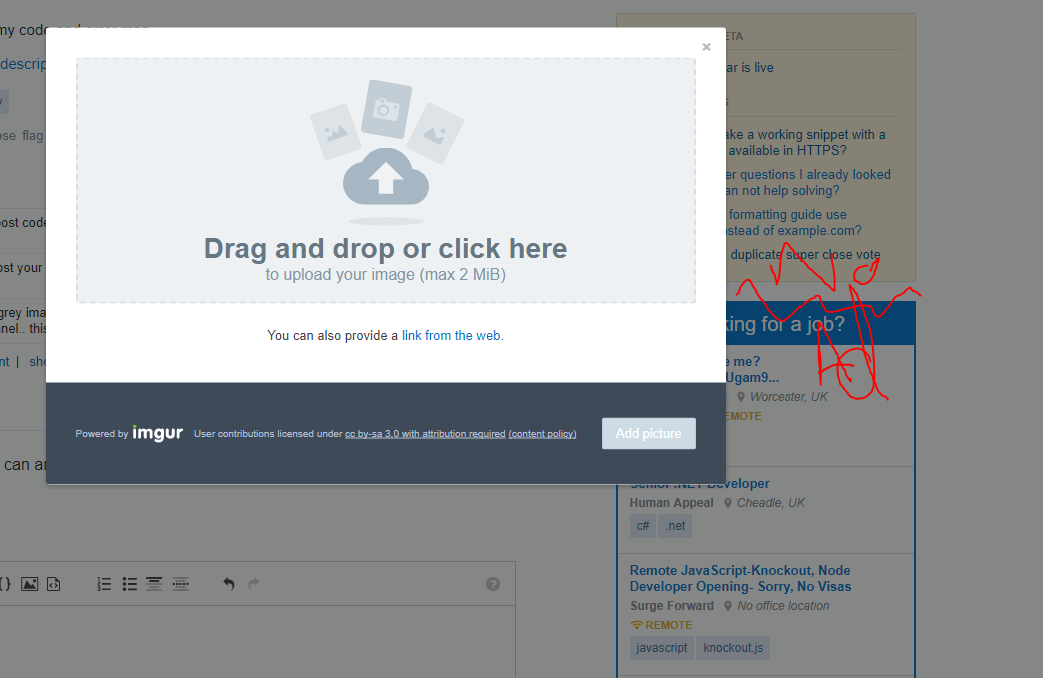 If you load a non-Microsoft tagged post to get a different ad, it also seems to work fine: 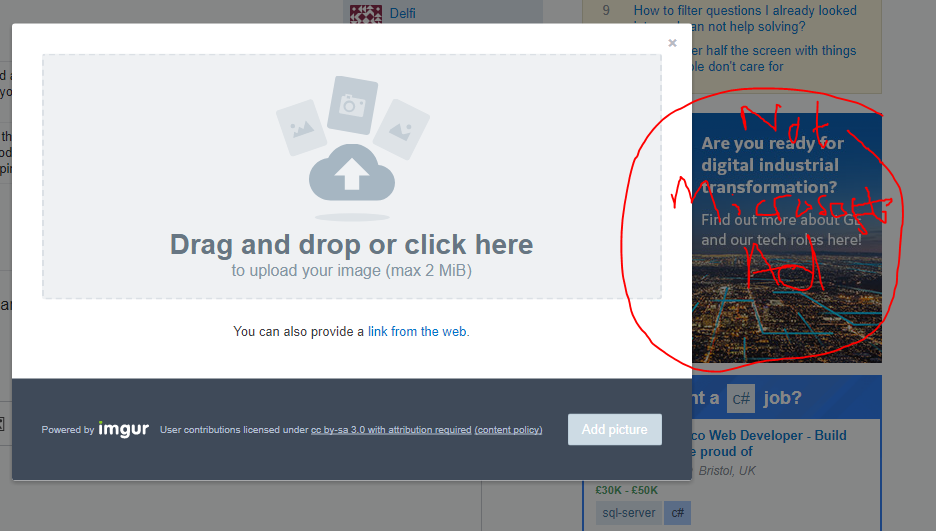 NOTE: I have Ghostery running, but it was disabled for these tests.

Not the answer you're looking for? Browse other questions tagged bug status-completed advertising image-upload .

5
"featured" tab missing when current tab is "interesting"
3
Cannot update profile for Stack Overflow
4
Chat message window not scrolling anymore on new message or page load
135
My Hats disappeared!
5
A single question leads to an Oops! Something bad happened, but only for me