Can we remove the [mysql-server] tag synonym

This part of Jon's answer:

One of the comments from Martin Smith I believe is in response to the above:

Can you do a search on questions initially tagged with both tags then later had one edited out?

The reason there aren't n times more posts with both tags is because people that are active in the tags, me included, are constantly requesting that users pick the correct tags when it's clear the post has been tagged incorrectly, as a high percentage of posts don't warrant the use of both tags.

I see this as problem that arises even when you're typing your first tag as sql-server as the suggested tags still show you mysql, see below: 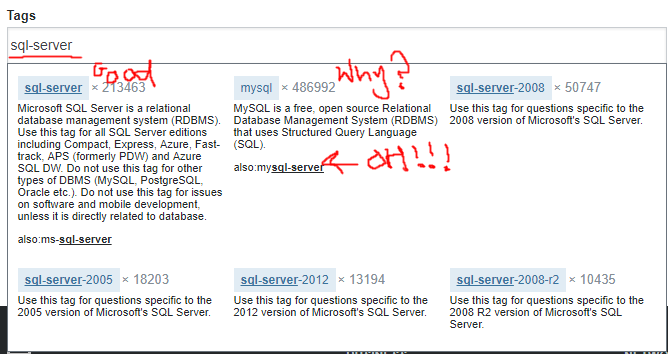 So with the first tag added, mysql is the next tag suggested, which I can only assume is due to the synonym mysql-server.

Can I request that this synonym is removed, as it simply re-points to mysql and is more than likely the reason that a lot of lower tier questions get tagged with both and it adds little to no value.

Just to complete the circle... it doesn't work both ways:

I decided to get a very rough idea of the amount of times users have commented requesting the tags be fixed, I created a SEDE Query to check where a comment contains both *sql-server* and *mysql*. This returned 3199 results.

This obviously doesn't include:

Obviously there will be instances where this may have been a legitimate comment or commentary on an answer with both tags, but my feeling is that they would possibly be in the minority and be outweighed by the comments that were likely deleted.

53
Can we stop suggesting both Sql-Server and MySql in the suggested tags?