I was lucky enough to catch this: 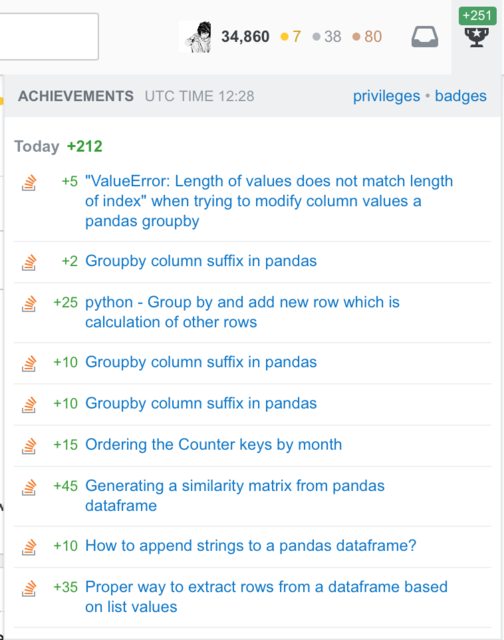 A sudden notification of a massive amount of rep gain, and when you click on the tab, absolutely nothing. The screenshot was taken literally seconds after I caught and opened it.

This happens to be the 3rd time I've noticed this today. The first time, it was a +50 gain, and the second time it was +92. The first two times, I assumed it was a user serial upvoting (and undoing it) as a joke, and dropped it. But this is a bit much.

If you view my profile, you'll see I have not answered any bounty questions, nor am I aware of any bounty being offered on any questions I have answered.

This clearly seems like a bug. What could be the cause of it?

This was a very subtle bug that manifested in all sorts of specific ways. It has been resolved with a deploy just a moment ago.

The root of the issue is that some work we did for Channels incorrectly handled string parsing in a specific situation of global keys (database 0 in Redis). We are architecting Channels to scale to a hundreds-of-thousands order of magnitude from the onset. Up until this point, all sites have their own database in Redis and global keys share database 0. Global keys are network-wide things like your top bar.

Now up until this point, every Site has an Id (a PK in a table). This Id is 1:1 with the Redis database number. That's how sharding has worked since the creation of the network. However, there are 2 reasons to no longer do this:

So we solve this by prefixing keys with the site ID now. This prepares us for cluster which we wanted to do anyway...so we prepped this in the work for Channels.

The specific issue here is that database 0 has always (for safety) appended the tier we're on (to ensure dev and prod keys never collide even if they somehow pointed at the same servers and ports). The code that added the key prefix as needed incorrectly thought this prefix was a site prefix and tried to strip it when necessary as well.

So, "topbar" as we call this in code. What happens with the achievements dropdown is we keep track of when you "last read" it and update that when you click it. This is stored for 30 days since we need it to both recalc how much rep to show when a rep recalc happens and know what to highlight as new when it expands. Since this is 30 days, it takes forever to expire in both L1 (local application domain) and L2 cache (Redis).

When one server (the one your loaded the dropdown from) updates the last-read, it should set it on all servers, here:

The problem is that the message sent to the other servers in that broadcastRefresh: true was being sent, but the global prefix was being stripped before the L1 purge...so it wasn't clearing the key,

Now, those relcalcs. The network-wide recalc for NetworkRepHistory happens after a local per-site recalc as part of our network aggregator. This happens, effectively, on a random web server. One with (ding ding) a bad cache. Here's why that matters:

Thankfully I thought this might be a problem and added logging back when we did it, yay!

So when the recalc happen with a bad "last read" cache on that server, we calculated the range of rep to add up incorrectly...showing you a too-big value.

Note that this also manifested in a slightly different near-realtime way when switching between Stack Overflow and Meta because Stack Overflow runs on the web01-09 servers and Meta Stack Overflow/Exchange run on web10-11, due to the same cache mismatch.

I know that's a bit long but this was a bit complicated to track down, so I wanted to share. Bonus image: Redis MONITOR screenshot from spinup debugging:

Not the answer you're looking for? Browse other questions tagged support bug status-completed reputation .

6
On a tag page, why does score (not rep) drop 70 points overnight instead of going up by 15?
67
Why don't you continue to gain 2 rep for edits once you've reached 2k rep?
22
Awarding bounty rep after expiration
31
Unaccepting answer due to serial voting
11
"Serial voting reversed" destroyed my rep