Allow community to vote to create and edit tag warnings

I think it would be a great idea if we could flag a tag w/ some sort of community voting, like how synonyms are created, to discourage certain tags from being used. I would say the threshold should be pretty high for allowing it. It should also allow the community to enter into some sort of wiki the reason the community doesn't support the tag. It would be more firm than a tag excerpt.

I had to close 2 separate questions in a minute for tags that had "DO NOT USE" in different phrasing in the tag excerpt.

In all frankness...the issue with tags saying "DO NOT USE" is twofold: it's either outdated, or wholly ignored by an asker.

Like, do you know just how easy it is to add a tag to a question? It takes almost no thought or effort at all; just plop in a few related keywords in your question and lo! you have all the tags you need to satisfy whatever Stack Overflow mob may come after you.

This underscores a problem with tags; they're supposed to be used to identify and compartmentalize a specific question to a specific demographic, and not as metadata. Everyone around here treats it as metadata. Even Meta treats it as metadata, by requiring your question to have discussion, feature-request, or bug attached. Tags will be added, even if they don't really make a lot of sense if you step back and think about it a little.

The issue right now is that the "DO NOT USE" request is all we've got. Regardless of how many times you're going to warn someone not to do something, they'll do it that many times and once more for good measure. Asking the community to vote on this would add development cost to an otherwise futile effort.

I suppose one thing we could do is clean up the tags which still manage to have this message in them. There's only a handful of them left, and we can evaluate if they're viable tags to have around (for burnination efforts), or if it's a matter of editing the excerpt. 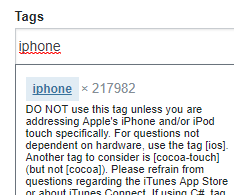 That's the tag wiki excerpt—it pops up when you type the name of a tag. Restrictions on who can edit them are documented here.

There's also an additional type of warning that's attached to the blacklist functionality:

Those have a critical flaw: they only show up after the tag edit field loses focus... Such as would happen when someone has entered all of the tags and clicked the "Post Your Question" button. I'll cheerfully add them as a last-ditch effort in some cases, but let's not fool ourselves: the majority of askers probably don't see them at all.

Here are some quick stats: about 90% of the people who trigger blacklist warnings end up posting their question anyway; in contrast, under 70% of everyone who loads the /questions/ask page actually posts a question.

Until such a time as the latter warnings work a bit better for catching folks' attention, there's no real point in making them easier to add. Currently, tag warnings are an exercise in shutting the barn door when the horse is most of the way through it already.

The only other option would be blacklisting the tag, which is the nuclear option. Since it prevents the tag from ever being used anywhere at all, there's not a lot of purpose to putting a lot of work into curating guidance for their usage.

Not the answer you're looking for? Browse other questions tagged feature-request tags tag-tips .

3
Synonymize [pom] and [pom.xml] to [maven]
24
When a user is asking a question with a certain tag, add the ability to prompt them with guidance