Yesterday I was the victim of a serial downvote, where they randomly voted 4 times in different posts, but the system only reversed the equivalent of 3. On other network sites, I have been a victim of "serial upvote" a few times and always the system reverted correctly, removing all reputation equivalent to the votes in series. 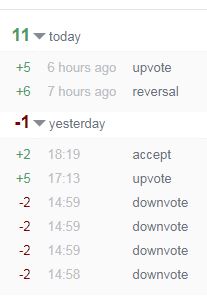 Is this behavior expected by the reversal? This is not the first time I'm a serial downvote victim and the system does not reverts correctly.

The serial downvoting script is conservative by design, so sometimes it gets part of a streak of votes and not the remainder. Sometimes, these votes came from different people and were just coincidental.

In this case, I think the script missed one, because you weren't the only person that was targeted with serial downvotes by this person. Some of the others they left for other people were missed as well, so I've requested that community managers look into it.

I normally wouldn't ping them over a single missed vote, but given the multiple users impacted by this I thought they should take a look. Again, this does happen from time to time with the script and its relatively high thresholds for detecting serial voting.

Not the answer you're looking for? Browse other questions tagged support serial-voting .

39
Serial voting was clearly only partially reversed - worth a mod flag?