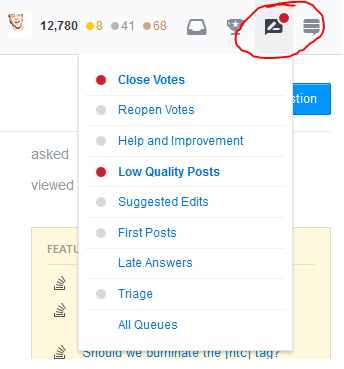 That icon is the same, isn't it? For pity's sake, can we replace that icon or just add some text?

Now it has a red dot. Great. Even the red dot's meaning isn't clear; there's no way to infer its actual meaning from the UI. I can only assume it means:

What is so wrong with text that we're clinging to such cryptic UI cues?

First, I gotta say that I love your mock-up, and so does just about everyone else I've talked to; it's a very clean, elegant look that neither depends on nor eschews the value of text for communicating function. Ultimately, the decision of whether or not to use it or something like it rests with our design team.

In the meantime, we're left to grapple with the question of what to do about reviews not getting done.

The nice thing about even an utterly cryptic icon is that eventually folks do get used to it. Or they disappear and are replaced by a new generation who just assume it means something to the old folks who they're replacing. In this case, that process took about 5 months, which was really painful and something I didn't want to do. But regardless, here's where we are today: 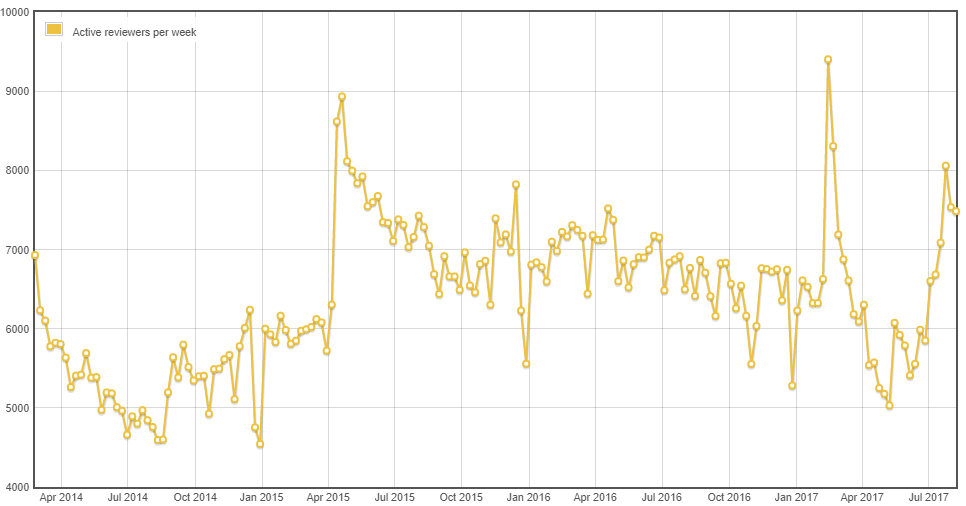 That looks awesome, right? More active reviewers than ever! Well... 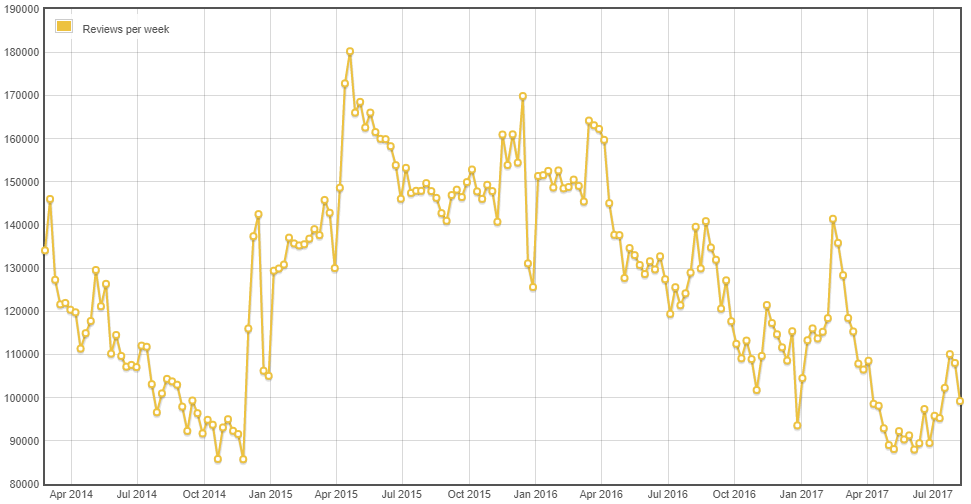 In terms of what's actually getting done, we're, uh, doing slightly better than when everyone's travelling for Christmas vacation. Part of the problem is that a ton of formerly-active reviewers are still gone; they've just been replaced by brand-new reviewers: 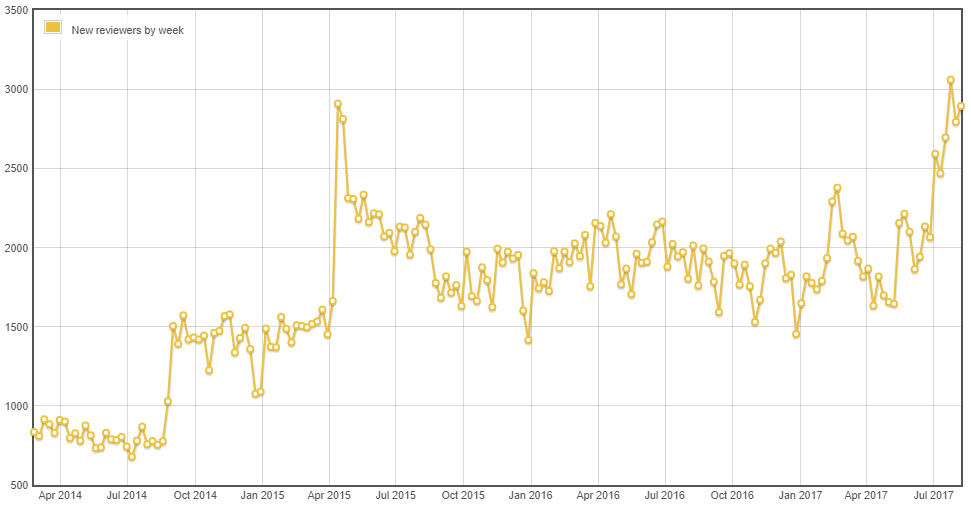 ...and most of those new reviewers aren't doing all that many reviews, at least not yet. And chances are, a big part of the issue there is that we didn't just take away the text - we also took away that number in the top bar.

Where and when to review

...A smaller number that appeared right next to the word "review", as if to say "n things need your review". A good bit of the time, n would've been small enough that most viewers could plausibly have reviewed each item in the queue themselves, were it not for all the other folks doing the same thing.

In short, the queues looked much more manageable, and were heavily skewed in favor of driving folks to suggested edits.

By early April, we'd lost all of that: first we lost a lot of reviewers by removing the familiar "review" link, then we lost the focus on suggested edits by trying to make the new UI less annoying and more consistent.

That left us with two problems: the lack of reviewers, and the lack of anything that might tell new reviewers what was actually urgent / important.

The new "icon" - the red dot triggered by one or more queues approaching an excessively-large number of pending tasks - is an attempt to address the second problem.

This new icon and its siblings, serves a valuable purpose of hiding the review queues feature as a pale gray icon beside other pale gray icons that I'm also quite adept at completely ignoring. It's like that whole part of StackOverflow doesn't exist.

1285
Sunsetting Documentation
93
Help test the new Top Nav: phase 3 testing runs this week
398
Please change the review icon back to a text link
152
Fuzzy the number of questions in the close review queue, a dopamine for the shutterers
108
When I look at the review icon, I see red
39
"posts awaiting review" orange counter is way off
60
Add a link to moderator tools to the new review dropdown menu
109
McStackIconOverflow
22
Review queue updates
4
Queue Icon Meaning
See more linked questions

2
Font in the stackoverflow icon
3
CodePlex's icon
108
When I look at the review icon, I see red
5
Why isn't the Kotlin tag icon the same as the current official Kotlin icon?
60
New Reviews Icon?
24
What is the icon on the new left nav?