Is this tangential discussion in the comments too chatty (declined flags)?

I ran into What and where are the stack and heap?, and found a bunch of comments which seem to not really be contributing much and should be removed (since it's basically just an extended discussion about what programmers should and shouldn't know), so I flagged each of them (as "too chatty", i.e. "no longer needed").

However, the flags were declined.

Was this a mistake by a moderator or do I just not understand what constitutes "too chatty"?

If they were declined (at least partly) because they were too highly voted... is this a good reason to decline it? Aren't non-constructive comments non-constructive regardless of their votes? Tangential comments tend to be vote magnets, not because it's useful as much as that it's an opinion someone's sharing that people agree with (or something along those lines). 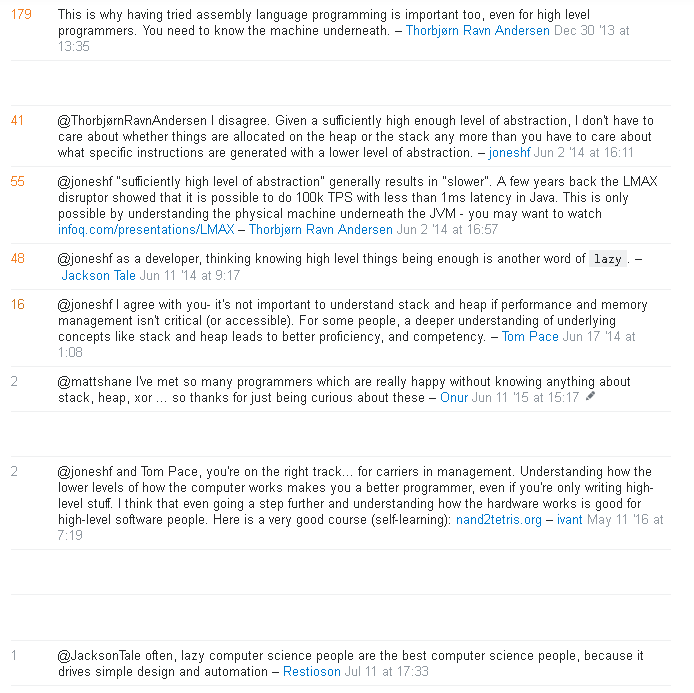 (I didn't flag one of these - I think it was the first one, but that should probably be removed too)

I didn't flag one of these - I think it was the first one, but that should probably be removed too

I assumed that every single comment but the first one being flagged meant someone wanted the first to stick around, and I felt if it were to stay then the comments disagreeing should too.

Since that’s now been clarified, though… consider them gone!

29
My "too chatty" flags keep getting declined. Why?
7
Should '@user check my update' comments on answers be flagged as too chatty
13
Were these LQP auto-comments, in fact, wrong/not constructive, or am I over-defending dubious answers?
31
"Chatty" flag declined on comment but I think that was the wrong decision
2
Comment removed. Was it too chatty?
6
Flagging obsolete comments; repercussions to the user
55
Why were my flags declined but the flagged comments removed?