Another user edited his answer to include content from my answer, without giving me credit

I am referring to the following post where the accepted answer was edited, or frankly re-written completely, roughly a year after posting my answer and by duplicating most of its content: Modify Bash prompt prefix in OS X terminal 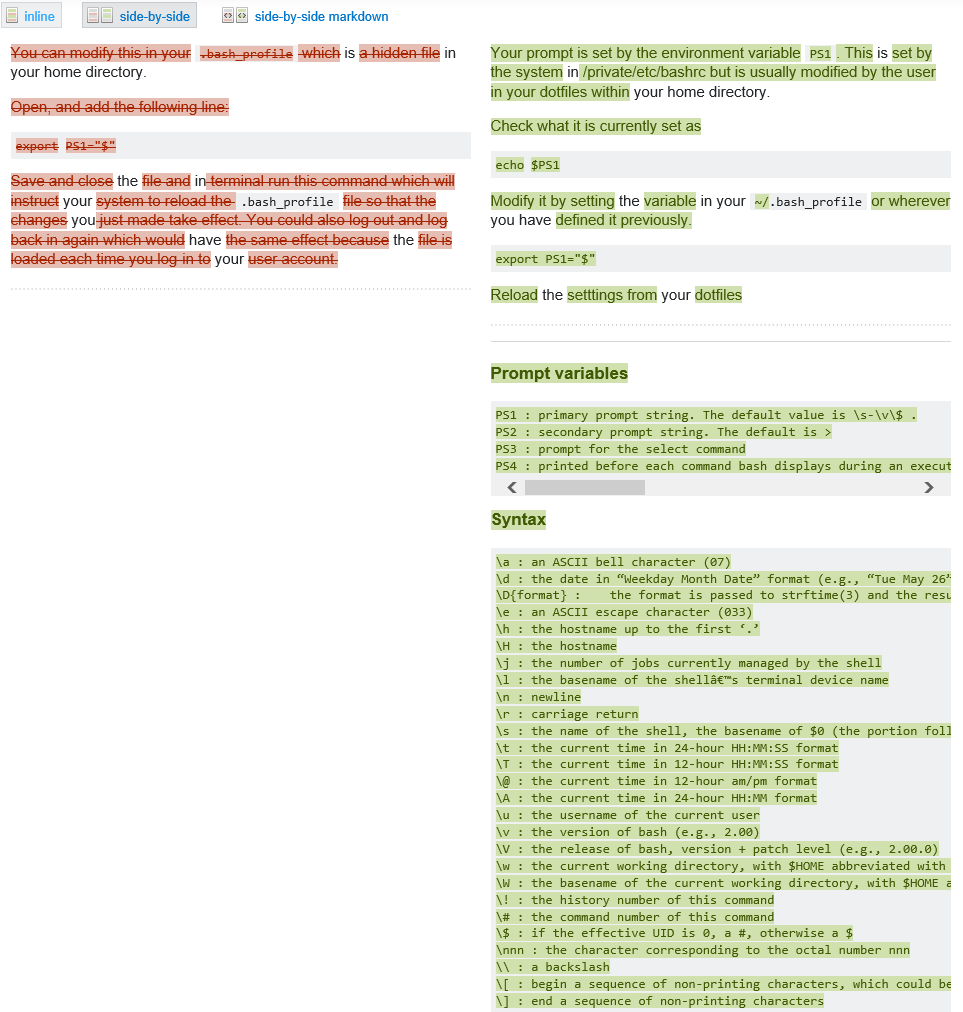 The user did not bother giving me any credits for it and is likely to get upvotes for his my answer.

First off, it strikes me as utterly disingenuous, that you are upset someone else failed to give you credit when your entire answer is plagiarized from another source. You do feebly note the title of the text you're going to copy from at the beginning of the post, but:

Wholesale copying like this from another source is not acceptable, even if you were taking proper care to cite and format it. Taking excerpts from another source is okay, with proper attribution, as is summarizing someone else's work. But copying the entire thing or even large portions of it puts you outside the realm of "fair use". As stated previously, you weren't building on others' work, using it as a reference for your own original content; you were just copying their materials.

In fact, even your edits in response to questions arising in the comments were copied-and-pasted from the same book, but that isn't clearly indicated in any way within the answer. Again, it looks like you're trying to claim these words as your own, saying that they are "answering BisTro['s] comment".

I also found another problem: you've posted this same content, with the same problems, in another answer to a different question. You've also earned a large chunk of reputation from that answer. Except, that time, you didn't even bother to format it so that it is readable (code formatting for text? really?), much less as a quotation disclaiming your own authorship of it. This whole answer is just a pathetic copy-paste job from the original source, with no attempt even made to clean up its presentation. The citation is completely hidden at the bottom. Besides that, posting the same answer to multiple questions is frowned upon here; if you find two questions where the same exact answer can be posted, then you should be marking one of those questions as a duplicate.

On account of these concerns, I would delete both of those answers outright. I don't consider what you've done here to be fair or ethical, and Stack Overflow moderators do not allow plagiarism.

However, misbehavior on your part does not justify misbehavior on another user's part, so let's look at what you are accusing davidcondrey of doing. Looking at his answer, I don't see anything that is copied or plagiarized from your answer (which we've already established is not "your" answer) other than the syntax table. While I agree that he probably should have provided a source for that, since it is most likely that he pulled it from your answer*, the collation of a syntax table isn't exactly original work. All of the information it contains is readily available from multiple sources, and in fact, the entire syntax table appears in multiple sources online as well as in books, including the Bash man page and the official documentation.

The rest of his answer is prose, syntax examples, and a variable list that he evidently composed/compiled independently. Perhaps he was inspired by your answer (no one can say for sure), but there's nothing wrong with that! We want users to improve their answers, and continue improving their answers. That davidcondrey did so does not mean that he did anything wrong—quite the contrary. He didn't copy your answer by any reasonable interpretation of the term, so nothing unethical or inappropriate happened here.

"Deviating from author's intent" is a potential reason to reject a third party's attempt to edit an answer, but attempting to apply this to an edit by the original author is nonsensical. He knows quite well what his intentions are.

__
* I say this because, as you point out, the revisions were made to his answer after your answer was posted, and it's hard to imagine that he didn't look elsewhere on the page after visiting it to update his answer. Then again, the presence of Mojibake, like â€™ in lieu of a quotation mark (originally present in his table but not in yours; I've since edited it out) suggests that he didn't simply copy-and-paste the table from your answer to his answer. It seems most likely he lifted it from an external source. So while I still agree that it requires a citation, there is less evidence than there might first appear that he copied it directly from you.

30
Are reputation points working as intended?
85
Giving proper credit to low-rep user
9
Should an answer be edited to include the correct answer from another's comment?
21
Is copy-pasting content from other websites without citation acceptable?
2
Why is my edited answer is marked as edited by another user?
3
Other user changes his wrong answer based on information in my answer
40
Should we keep copycat answers in check? If so, any ideas?