"You need 150 reputation to vote" error message is too low

Knowing that users with less than 150 reputation can't vote in elections, I tried to vote in the election with a low-reputation sock puppet just to see what happens. As expected, I got an error message, but it's positioned sub-optimally: 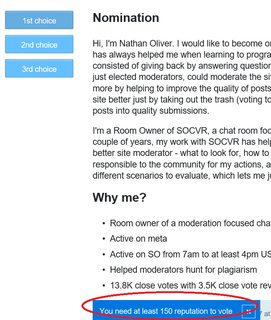 I think the error message should be displayed underneath the voting buttons, rather than at the very bottom of the nomination. New users who don't know that voting in the election requires a minimum reputation score might not see it all the way down there if they haven't scrolled the page, and this may make them think that the button isn't working.

This might not be a very important issue, but I still think it would improve the usability to move the error message up.

4
Ways in which low rep users can contribute in the Election
122
2015 Moderator Candidate Activity Profiles
325
2014 SO Moderator Election Q&A - Questionnaire
14
LQ Posts Review - Error while trying to delete vote after daily vote limit expiry
67
What happens to election votes when a sock puppet is deleted?
40
Is it gaming the system when a moderator candidate submits their nomination at the last moment?
47
What is the purpose of the questionnaire on moderator elections?