When trying to use my iPad/safari just now to upload an image to SO, it proved to be impossible. The code that calculates "where the centre of the screen is" seems broken; the upload light box appears, greying out most of the page, but the uploader is positioned so far right and down that a large part of it hangs off the screen. It is possible to choose an image, but not upload it as I suspect the submit button is hanging off screen. I'd take a screenshot to demonstrate but it destroys the page functionality because there is no way of dismissing the modal overlay panel within the visible parts of it. The only way out is to refresh the page, losing any typing efforts

After I post this I'll aim to take a screenshot of the bug, and upload via another way.. 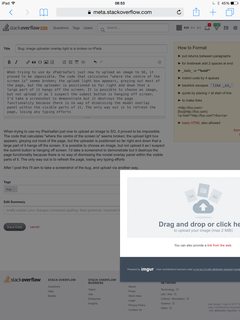 Here's a screenshot from v10 of iOS- it works and problems are just limited to the overlay looking incomplete on the right: 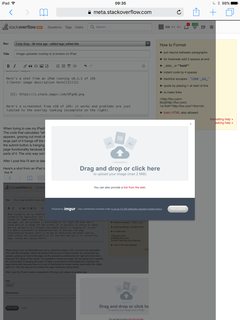 I don't have any devices running interim version, and granted v8 is quite old so this may not be a priority; anyone out there with a v9 variant can test?