Should we clear chatty comments from election nominations?

In past elections, and seemingly in this one too, we've seen 'real' questions for the nominees pushed below the fold by comments like this: 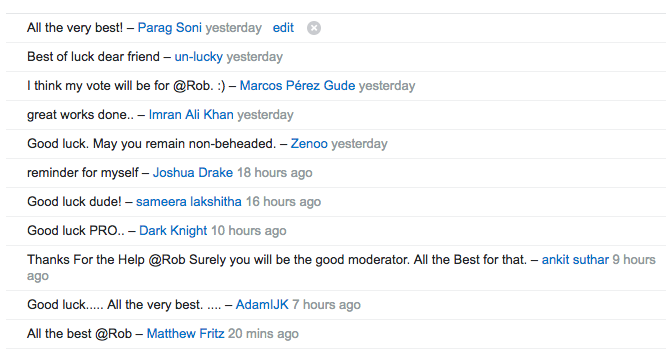 My instinct from the rest of the site is to clear these out to make room for comments with substance. Pros and cons I'm seeing:

While I think non-interference in elections is an important principle, I don't think removing noisy comments qualifies as interference.

I absolutely think this is something that moderators should do periodically, when the noise is crowding out relevant, meaningful comments. They should obviously do so carefully and judiciously, but that's no different than how they would exercise their privileges in any other context.

I'd be in favor of removing all of the above comments - but would that be seen as removing support for a nominee?

Maybe, but so what? There is no point in showing support for a nominee. That's why we have the "primary" phase, where vote arrows will be added so that support can be expressed in a clear and sane manner.

Yes, we should remove them. They're useless, and they can cause useful comments to be hidden or drowned in the noise.

I largely agree with much of what everyone has said thus far - yes, remove the comments - but I want to call this specific line out:

...I'd be in favor of removing all of the above comments - but would that be seen as removing support for a nominee?

The only tangible support is that of a vote cast in either the primaries or in the election itself. Merely voicing that support isn't "support" that can be measured, since it doesn't correlate to actual votes.

I wouldn't feel offended, upset, or even bat an eye if the "good luck"-style comments were removed to expose the heavier hitting, "So, I see you haven't done XYZ for the site, why should we consider you for moderator?"-style comments.

7
Should '@user check my update' comments on answers be flagged as too chatty
52
Hide all comments by default on election nominations, for clarity and fairness
21
Is it normal to keep fun or chatty comments selectively on Meta?
18
New election or calling up candidates from a previous election
3
Is this tangential discussion in the comments too chatty (declined flags)?
11
Where can I read comments on retracted moderator nominations