Why is my question getting flagged as too broad? [duplicate]

I've been asking the following question for some niche tags:

Was any esoteric programming language ever used for other than “educational” purposes? 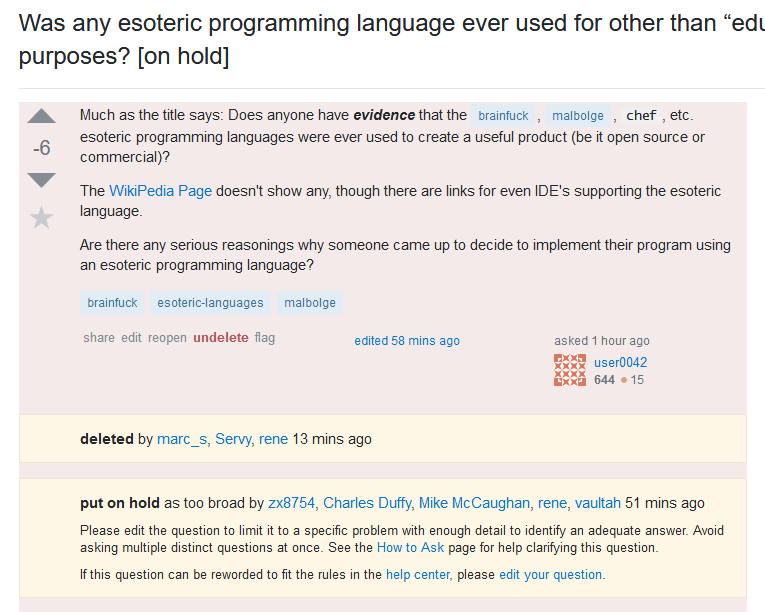 The question received 2 downvotes and 2 close votes at time of writing here.

I don't get what's actually wrong with it.

"Too broad" Doesn't seem to be applicable as close reason, since I'm clearly asking for evidence (and I'm pretty sure there won't be much results)

There are several "too broad" tests. One of them is the number of potential answers being essentially infinite. Another of them is the fact that people can change the answer simply by doing something with the language off-site, then pointing to it and declaring it to not be for "educational purposes".

And then there's the fact that it's ultimately a "yes/no" question. Particularly for a question where even if the answer is no right now, the answer can be changed to "yes" simply by someone doing something with such a language.

Then there's the nature of the question itself. It's asking about a poorly defined concept: "esoteric languages". Well, what constitutes "esoteric"? Also, it's not clear what is a "useful product"? Useful to whom?

Overall, this is clearly a question we don't want on this site.

Not the answer you're looking for? Browse other questions tagged discussion specific-question downvotes close-reasons .

49
Breaking down “too broad” and trying to understand it
148
Is there a less restrictive Stack Exchange site specially suited for not too specific questions?

71
My question turned out to be a rather esoteric typo — what should I do/what should be done?
2
Obvious spam declined from being flagged?
25
Are questions asking for a mathematical formula on-topic?
62
Dealing with code critique requests — isn't “Too broad” too broad?
41
Flagged obvious spam post but flag was declined
24
Why was this question closed as “requesting an offsite resource”?
12
Why does the [new-operator] wiki only reference C++?
22
Can an upvoted question with accepted upvoted answer be deleted?
1
Are questions about how to detect something out of an image using an 3rd party API too broad?