What to do when people fight a war using votes, flags and SO powers?

Once in a while a little war breaks loose. In this particular case a user copied the answer of somebody else (Answer 2) in his own answer (Answer 1) and asked Answer 2 to be deleted (which it was). Then a request for undelete votes was made in the chat, after which Answer 2 was undeleted and Answer 1 was downvoted into oblivion. Meanwhile also comments talking about it got flagged/deleted, people started voting to delete Answer 1 and after a few hours the entire question is a mess and everybody is mad at each other.

But Answer 1 was, although not the best one, a perfectly valid answer, and the accepted one. And I don't think flags and SO powers are meant to show your appreciation of anyone's character.

Thing is, I've been thinking on how I could report this and prevent that feelings ruin that poor question further. But there seems no accurate flag for this. So how would I report this in the future?

The question I'm talking about: Conditionally replace elements of vector based on index (also look at the revision history of that accepted answer).

The sentiments are clear in the R chat room: https://chat.stackoverflow.com/transcript/106

Please keep in mind I'm not taking sides here, and I do understand the frustrations about the behaviour of the person who wrote Answer 1. I just want to know how to stop this before it gets out of hand.

I think things might be getting blown a little out of proportion here. The basic story is that someone posted an answer that was accepted. Others thought that the answer was flawed and downvoted it.

Some of the comments on that answer were fairly rude. They were flagged and removed. For the record, here are the deleted comments: 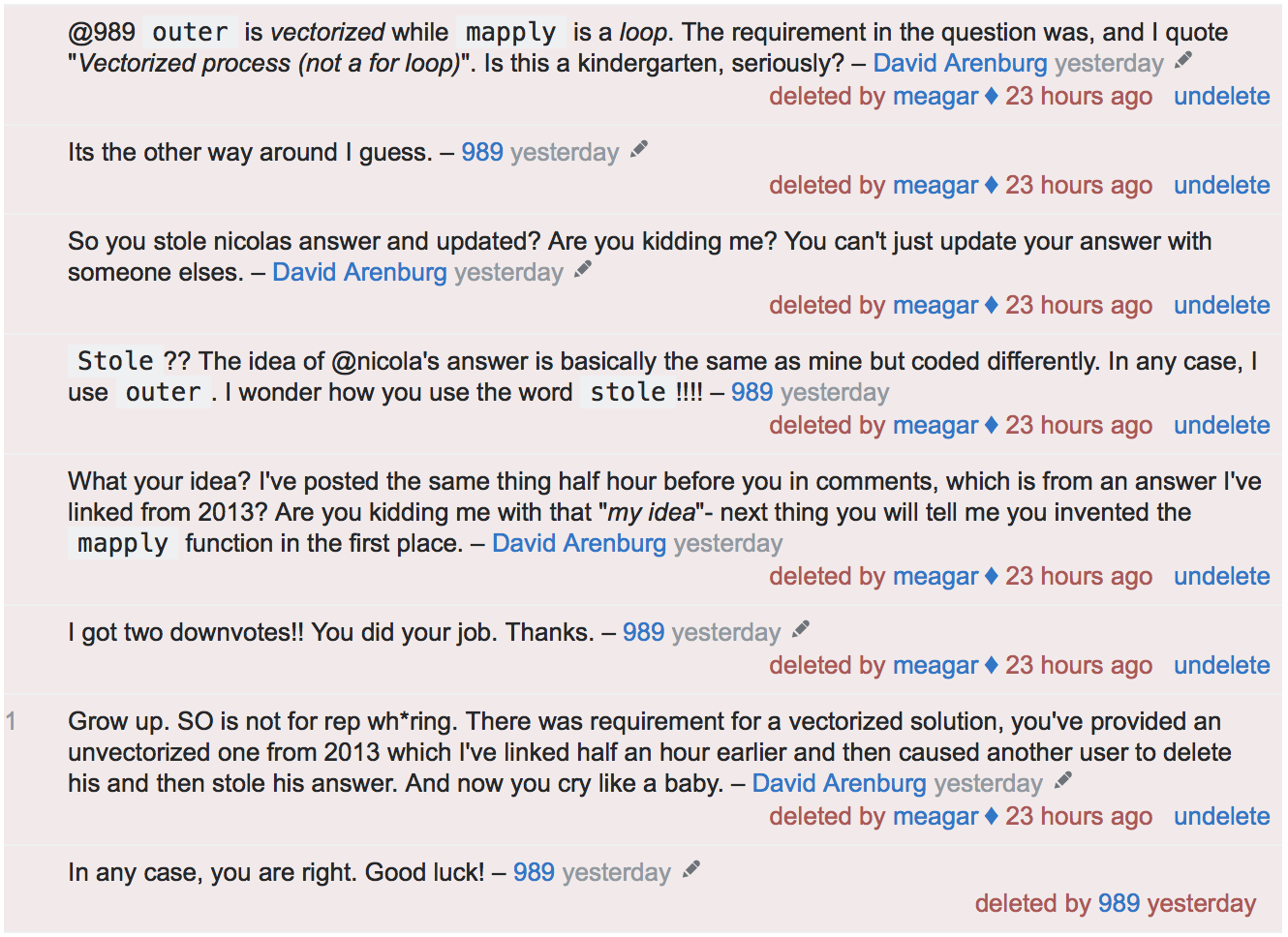 I think most people can agree that those comments weren't too constructive and I agree with the decision to delete them when flagged.

At that point, the answerer was accused of "hiding behind flags", and the answer was linked in the R chatroom, which led to a series of downvotes against it. This user felt they were being targeted, which they kinda were, but we can't control how people vote. Meta-commentary about the votes was edited into the answer and rolled back.

I'm always a little uncomfortable with posts being linked in chatrooms and people skewing votes just by that visibility, but there's really nothing that can be done about that. It's the hostility in comments that I was more concerned about, and that has been taken care of.

As always, don't let things get personal, just downvote and / or flag and move on.

6
Shouldn't we revert reputation gains for answers to closed questions?
15
Deleted Question too broad!
38
How should we handle ext/mysql deprecation in PHP questions (older included)?
34
Is there any way to report a user if a rude comment is deleted?
4
What defines a roll-back war and at what point do roll backs trigger auto mod flags?
2
Is there a way to prevent another user from editing your question if you disagree with their edits?
51
Why were these two NAA flags declined for link only answers (one of these being the accepted answer)?
49
Should I mod-flag duplicate answers for deletion, or not?
5
I answered a duplicate and the answer got accepted: how do I clean up my mistake?