Relevant comments keep getting deleted at the OP's request

I believe that it is important to let critical comments stand, assuming that they are (still) relevant and not ad-hominem.

The linked answer has many up-votes (presumably, because it seems to work, because the unwanted side effect it has easily goes unnoticed), so it is important to let future readers know how and why the answer is flawed.
(Obviously, my assessment could be wrong, but I have yet to see an argument against it - only attempts to silence.)

I find it troubling that my comments were repeatedly deleted for the sole reason that the OP tried to squash dissent and made enough noise to get their wish repeatedly.

I don't know for sure whether it was the same moderator who was involved in the original cleanup ended up deleting my follow-up comments, and this lack of transparency and feedback is part of the problem:

Here's the deleted comment in context, with it and the OP's edit that prompted it highlighted: 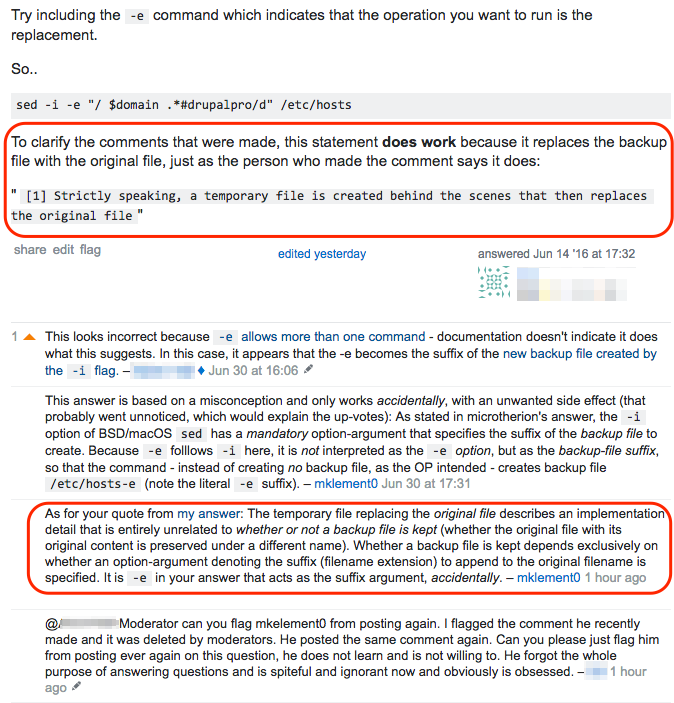 Comments are just a part of the system we have to deal with Questions and Answers. Comments are ephemeral. All comments are subject to deletion at any time for any reason.

Ideally, correct and currently apropos criticisms should not be deleted, but it happens.

How to improve the chances for your comments to avoid deletion by a moderator:

The problem with this answer is it says <X> but the [documentation](http://docslink) says <Y>.

This criticism has still not been addressed. The problem with this answer is ...

(You seemed to be taking 2 full comments to make all the points you wanted to make, and then you engaged in arguing with the answerer - and what was could have been good criticism was drowned out by noise. Then reposting identical comments without addressing the prior deletions didn't help.)

Still getting deleted, but you're sure you're right?

Bring it to meta's attention. I was hoping you would, and you did, thank you.

We live in the real world, so our ideals are met with contingencies.

It takes time for the community to deal with bad stuff.

Other than taking my case here, which is obviously only suitable as a one-time approach, how should such cases be handled?

This is not a one-time thing. This will happen again.

You brought it to meta, which is fine, and if it happens on another Q&A, I hope you say something again. You can also bring it up in chat.

I do worry that we didn't have others also address the answer as well over time. But I also think that bringing it to meta was the right thing.

Is the need to allow moderators to delete comments without fuss simply the price to pay for such - hopefully only occasional - missteps?

We want to elevate the Questions and Answers. Comments are quite useful, but when their usefulness is outlived, they get in the way, and need to be deleted.

Anyone with power to delete them will make mistakes sometimes (and I'm not saying any particular deletion in this case was wrong per-se). That's why we have elected community moderators to handle these issues and respond on meta when there are questions about it.

-7
Is it appropriate to invite scrutiny of a highly up-voted, disputed answer?

43
Comment flag declined, all comments now deleted - what happened?
52
Removing comments that are no longer relevant (but were at the time of posting)
0
Is pointing out OP's accept ratio in comments inappropriate?
4
My comments below my answer are repeatedly deleted - what is going on here?