Should I flag a question because of an extensive bounty notice that is prompting for updated answers?

This question How do you get the rails generated id of a form element for reference in javascript? have an open bounty of 50.

But the person who placed the bounty added lots of information in the notice and the reason for bounty is existing answers are outdated.

In this case, when the period is over and notice removed, future visitors may not know what is the difference between existing answer and new answer.

I think it should be made as an edit to the question or posted as a new question and the notice should be small. 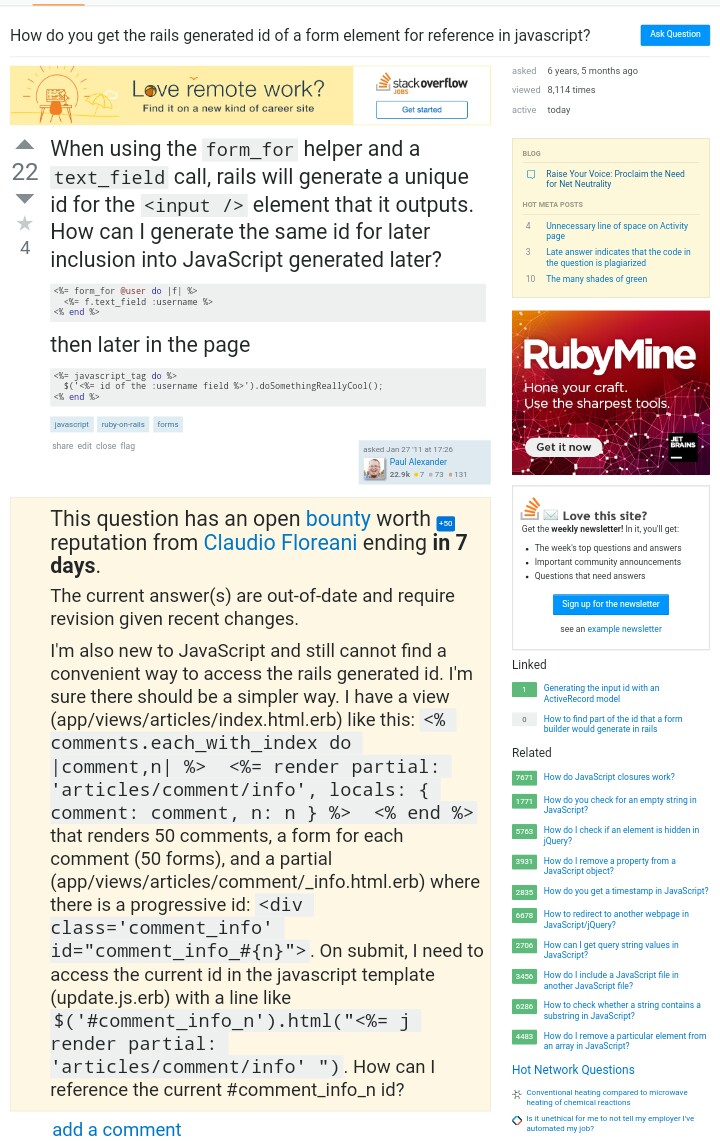 I pointed out that both examples are two special cases of the question. The author gives just one example of “Ruby on Rails generated id of a form element” and I'm giving another example. Example A and Example B. But the question is:

“How do you get the Ruby on Rails generated id of a form element for reference in JavaScript?”

It's not “Please fix this code because I don't know how to refer to the Ruby on Rails generated id in this javascript code”. The original question is general purpose, and it's still lacking a decent answer. Furthermore currently accepted answer (“creating a custom form builder”) is considered bad practice nowadays.

The answer may just reply to the question title, or even better give a working example for both case A and case B. If the answer has some unclear reference to the bounty's additional example, I will edit the answer to make it self-comprehensive.

[UPDATE - I EDITED THE ORIGINAL QUESTION]

As some people have suggested, I edited the original question to make it more clear that is a general purpose question, and it is not stricly related to the specific piece of code the original author placed in, as it is only one example and I gived another example.

Here is the edit

The reviewer @koby-douek has rejected it with the following motivation:

So what's going on here? It's clear that I am not addressing the author of the post.

In my (humble) opinion too many users have privileges to review the community without the necessary understanding of what they are reviewing. This is really stucking StackOverflow (and excuse the pun).

If I had been placed the question as a separate question I'm pretty sure it will have been flagged as a duplicated. If I place the motivation of the bounty in the bounty notice, it should have been make an edit. If I make an edit, someone refuses it completely misunderstanding the sense of the edit.

Too many people are so greed with their reputation, that their goal is the reputation itself and not the benefit of the community. And the saddest notice is that the most greedy people have gained the greatest power.

I personally have quite lost hope this community that once was so collaborating, useful and promising. I see more “you are using this site the wrong way, let me show you how you are supposed to use it” than real answers. The only people that do really answer questions nowadays are newcomers.

Providing a good answer needs effort to understand and to discuss with the author. Reviewing here seems to need neither the understanding nor the discussion.

No wonder everyone here is get more involved on reviewing the community and gaining privileges than in helping people understanding the technologies. And the proof is that reviewers too often don't even understand what they are reviewing. Someone states that you don't have to understand the topic to review it, that's true if you get involved with the parties, asking why and wherefore, before taking a decision. That how a good moderator (in its broadest meaning) should act.

“I don't even know what you are talking about but please shut up because that's not the way you are supposed to talk about it” is not taking this community anywhere. Too many “I know how StackOverflow should be” have lost of sight the main goal, that is not to teach how to make a question or an answer, but to help people learn with the help of the community. I'm not encouraging the “please fix my code” practice at all, but if someone is willing to help even those questions, than let they do it. And duplicated question don't have to be closed at the first vague resemblance of another one — that so easy now that the vague resemblance are suggested to anyone willing to flag it — because if a question or an answer is not useful it won't get enough attention.

Less flags, and more answers. Less reviewing, and more competence. In my (humble) opinion, this is what StackOverflow desperately needs to stop sinking. That's why people are moving to more liberal networks as Reddit, or to networks with more competent answers as Quora.

Now, feel free to flag this answer as “OT” and ask to place it as a separate meta-question.

It is their bounty and they are free, to some extent, to explain what they expect from a new answer. I do assume the extra context is inline with the question as seem to be the case here.

It is up to any one who posts an answer to do so in the context of the question. They can decide to either

In case no new answers are created for the extra context offered by the benefactor the bounty will expire without being awarded. Should the question have been edited beforehand the edit wouldn't have made sense at all.

Although it is a bit unclear why the user offered that bounty in this way (maybe they had asked that question but it got closed as a duplicate of this one and they don't see fit to make their question more distinct) the call to flag (and the comments that suggest the user did wrong) to have the bounty refunded is strange. I can see how both question and answer(s) might get better. If no one takes the bounty on, nothing changed.

tl;dr I don't see how this is abusing or malice or hurting quality. Either we get a better question and/or answers or in 7 days the world order is restored to its former self. We or moderators don't need to do anything. Only if the bounty is asking a completely new question it is maybe best to flag for a moderator if contacting the user didn't clarify the intent.

My personal thoughts on this: flag away. The rationale for that bounty seems to be trying to ask a different question to the original. That's not how bounties work at all.

The only entities that can fix this are moderators.

11
Can Moderators Modify Bounty Text?
60
How can I retrieve an answer I posted for a question that has been voluntarily removed by the author?
6
Unawarded but ended bounty prevents closure
3
What happens if a bounty is started again and but no correct answer gets posted?
5
Disambiguating version of Rust Futures APIs
4
What happened to the answers and bounty I placed on my question?