First Posts and Late Answers audits draw chiefly from posts that have been downvoted and deleted (with various exceptions for corner cases). All that such audits expect are simple downvotes, and a reasonable case can be made that almost all answers that have been deleted do deserve a downvote, whether or not their deletion is warranted.

Unfortunately, almost every one of these answers has a comment, often an auto-comment from Low Quality Posts, explaining the reason someone thought the answer should be deleted. And quite frequently this is badly wrong, flagrantly violating Your Answer Is In Another Castle guidance by deleting an answer in review that should only have been downvoted, or deleted by 20k users, not 2k users.

This wouldn't be so much of a problem except for one crucial thing: these audits are being deliberately presented, misleading comments and all, as the very models of proper moderation, the things FP/LA reviewers are being tested to try to live up to. So we are training junior site members that it's OK to routinely flag and delete answers because they are very terse (with or even without that fatal link). And when they hit 2k, they happily go and Recommend Deletion on all kinds of answers, completely unaware that they're violating official site policy, because they're instead following "official" site policy as expressed by "obviously correct" comments on actually deleted posts that the site software really did choose as audits.

How can we avoid spreading misinformation this way? Should we stop showing comments after FP/LA audits are revealed to match the way we hide them before? Should we add a special heuristic to audit selection to try to filter out the specific very common case of a link-based answer that's mistaken for link-only?

So we are training junior site members that it's OK to routinely flag and delete answers because they are very terse (with or even without that fatal link). And when they hit 2k, they happily go and Recommend Deletion on all kinds of answers, completely unaware that they're violating official site policy, because they're instead following "official" site policy as expressed by "obviously correct" comments on actually deleted posts that the site software really did choose as audits.

Presumably, these are the best examples that you could cherry-pick in support of your argument, yet it is quite clear to me that the first two are non-answers in need of deletion, completely consistent with our official policies.

This isn't just a link-only answer, it's a link to another question on Stack Overflow, which suggests that the question itself is a duplicate and should be closed. The answer should never have been posted. It should have been a comment or flag on the question, with a link to the proposed duplicate. If two questions have exactly the same answer, to the extent that no additional explanation is needed, then those questions are duplicates.

But even if you disagree with that, I don't see anything here that redeems this from being a useless, link-only answer in flagrant violation of the "Apples" guidance. 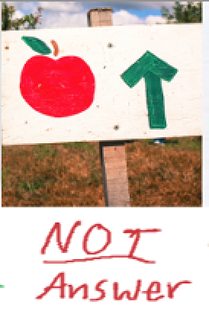 Furthermore, the phrase that constitutes the bulk of that "answer":

You could either modify the image pixel by pixel and it's a quick fix.

is utterly nonsensical. It starts out by saying "either", but there's never a second choice presented, so there isn't an "either"-"or" situation at all.

Besides, the question asks why the code they have isn't working to change the background. "Modify the image pixel by pixel" is not an answer to that question; it's an answer to a different question, one that was never asked.

Similarly, this isn't an answer to any of the questions that were asked. It might be tangentially relevant, or even helpful information, but it is not an answer and should therefore have been posted as a comment. Whatever you feel about it, it doesn't belong in the answer box. Not because it fails to meet some arbitrary length threshold, but because it is completely at odds with the question. 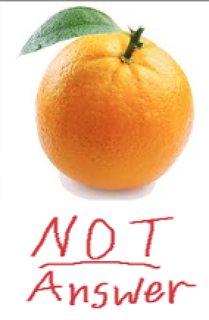 This answer is the only one that might possibly be construed as an answer to the question being asked, but honestly, I don't have any problem with training users to delete garbage like this.

I cannot agree more with Cody Gray's examination, but I want to add this:

The purpose of the "castle guidance" is to warn against becoming a thoughtless reviewing robot who runs a mental regex and votes to delete anything that has a link, without considering the other content.

It's not a stone tablet encouraging conversion into another kind of braindead rule follower, who insists that anything in an answer box that has more than just a link should ipso facto be preserved.

Junk posts are, and should remain, subject to removal at any time.

This is pretty clearly stated:

Does that mean these answers should forever hang around the site? No, not necessarily - if it turns out they're just not that useful, they should probably still be removed...

As for the "downvote, don't delete" dichotomy:
Downvotes are for "not useful" posts.
Posts that aren't useful get in the way when searching for solutions.
Removing these un-useful posts (in favor of useful ones) makes the internet a better place.
QED.

Not the answer you're looking for? Browse other questions tagged discussion comments review-audits deleted-answers automatic-comments .

274
You're doing it wrong: A plea for sanity in the Low Quality Posts queue
42
Should we flag comments made from the Low Quality Posts queue that are plain wrong?
24
Why was a NAA-flag on an answer linking to another SO answer declined?
13
Were these LQP auto-comments, in fact, wrong/not constructive, or am I over-defending dubious answers?
2
How to improve a canonical question, that may appear to be “too broad”?
3
Should this answer have been deleted via the LQP Queue?

46
Should one stop reviewing when they sometimes disagree with review audits?
41
What is the policy for linking to zip files on file sharing websites?
23
How come self deleted posts can become “Known-bad” Audits in the LQP queue?
13
Can users see comments on deleted answers?
41
I don't know the reason my answers were deleted. What should I do?
59
Request for official policy of implementation of section (4)(c)(iii) of CC BY-SA 3.0 regarding comments