How to figure out what's wrong with a closed question?

I just cast a reopen vote for a question and it didn't pass: 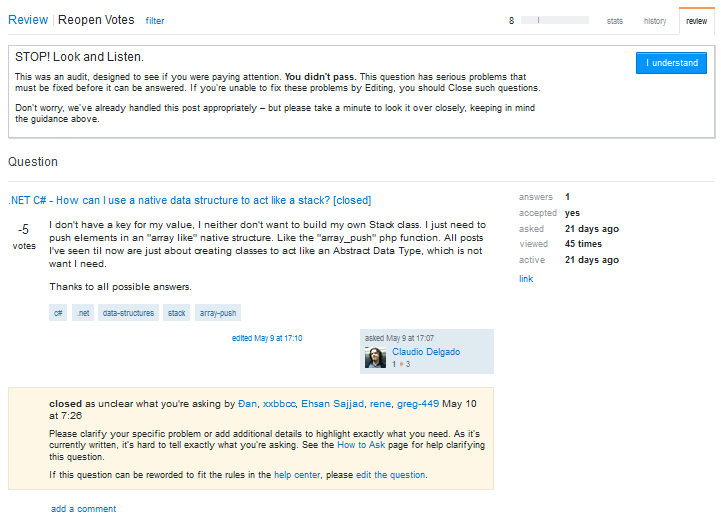 I stopped, looked, and listened, but it didn't help:

In short: there is a serious problem with this interface. If you want reviewers, try not to piss them off. I've always liked the review audit questions I've been given on answers, but this here is hard to stomach.

Mercifully, the question has been deleted, but let's parse what's going on here.

First and foremost: the audit did its job. You were supposed to critically read this post to see if it was good enough to remain on the site, and you didn't do it. There's really no other way to put that.

Now, onto the body of the question (reproduced here for < 10K):

I don't have a key for my value, I neither don't want to build my own Stack class. I just need to push elements in an "array like" native structure. Like the "array_push" php function. All posts I've seen til now are just about creating classes to act like an Abstract Data Type, which is not want I need.

Thanks to all possible answers.

Let's walk through this.

So, effectively, this question should have remained closed. There's nothing here of value that anyone's going to get out of leaving this open.

3
Figuring out how to improve a question

12
Dubious first posts queue review audit
9
To whom should I be addressing a custom close reason?
4
My edit didn't make a drastic change, why was it rejected?
18
Burninate or annotate [web-interface]
3
What's wrong with this particular question?
3
Wait, what's actually wrong with this question? (Review audit question)
25
Why was my code translation question closed?