Is it fine to call users "nerds" in comments?

I recently flagged a comment on a LQ question, posted by the OP in response to other comments letting them know what's wrong with their question. This was his comment:

I need an expert advise and that's it. I know that nerds will flag this question as too broad or opinion based.

Here is a screenshot: 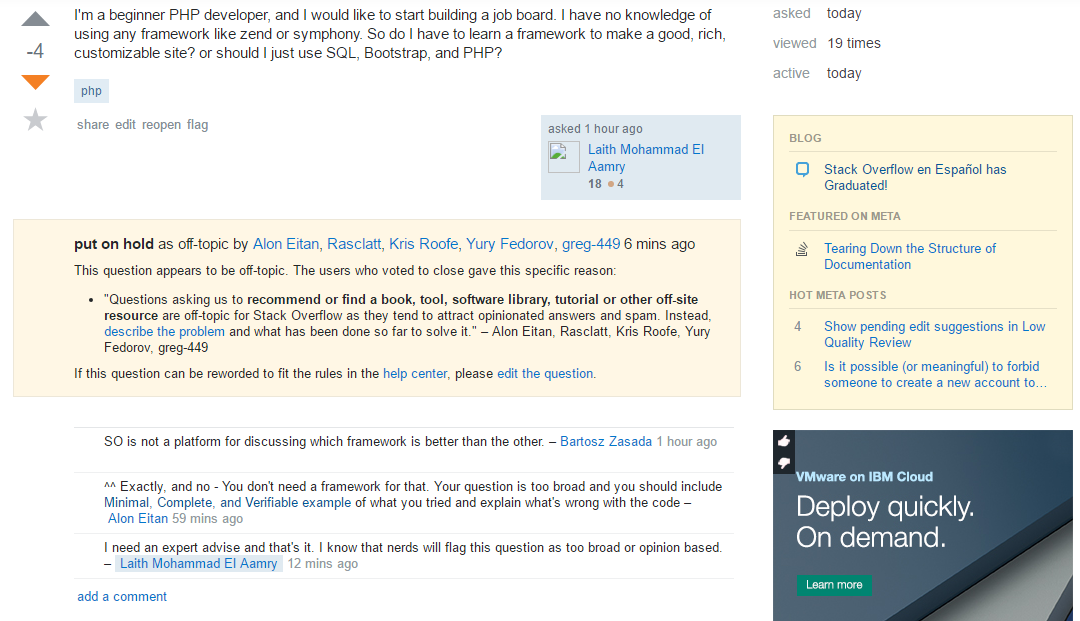 I flagged it as rude/offensive but it was declined, and yes - I don't specifically mind being called a "nerd", but perhaps other users could get offended, or it might have the potential to start a small comments war.

Note that the comment is now gone, and I'm confused - Did the OP delete it? because a moderator declined this flag. Is this type of comments is accepted - I need to understand what to do in future if I see a minor insults in the comments.

I would have flagged the comment as well. It's obvious that OP wasn't saying "nerd" in a positive manner, the comment seems offensive and I expect it to be deleted regardless of the entire question that it was part of.

Maybe the moderator didn't pay much attention when he reviewed the comment, and this happens. Otherwise, I would really want to know why it was declined.

It isn't really the word so much as how it was used. Although, to be fair, this is google's definition of the word nerd, and it isn't exactly flattering:

While the word "nerd" itself may or may not be of interest, the intent is really the issue. Many polite, inclusive, and friendly posts, events and phrases include the word nerd. There are also several alternative definitions of nerd which are more aimed at the technical expert angle; culturally, it seems that lately there has been more of a movement to "own" the word, so to speak.

The problem with the comment was its tone. It was an attempt to belittle, to place a negative connotation on a group of "others" in order to influence a decision. While there may be definitions or uses of the word nerd that are flattering or inclusive, the usage here was in the form of name-calling to alienate a group of people.

All said and done though, it was clear this comment was out of line. Moderators have a tough job, and sometimes in their constant struggle against the firehose they make small mistakes. This was one of them, it was corrected, and I don't think there should be a witch hunt for this word because of one accidental misuse of the moderation feature.

It is abuse. A self-identifying trap.

The word 'nerd' is pretty irrelevant, any 'possibly' negative term would have done.

I'd agree with it being deleted/edited as "noise", but if we followed the "people might be offended by it" methodology it would be a pretty boring place.

Whether is fine or not, it depends for each person.

tl; dr: Flag as unconstructive and move on: this is what I do when replies from SO users doesn't add value to the question or answer.

The term "nerd" is tricky, as some people self-identify as "nerd", whereas other dislike the term and consider it somewhat pejorative. There's no real "standard meaning".

So context is everything. And in this context I wouldn't consider "nerd" to be particularly rude or offensive. It's probably not intended to be flattering here, and it's a completely useless comment for sure. But offensive? Probably not.

A context where "nerd" would be offensive would be something like "Stack Overflow meta nerds with no life and nothing better to do than to close questions!", which is a real example I encountered a while ago.

Personally, I would have just ignored that comment. The question is terrible and cannot possibly be salvaged. There's no need to "clean" the comments on questions such as this, and the best ending for them is quick closure and deletion.

68
Moderator repeatedly deleting and undeleting their own answers

10
Why was my "purge comments" flag declined?
31
Can you clarify the meaning of 'obsolete' flags for comments?
14
Should I be flagging incorrect "possible duplicate" comments as not constructive?
19
How should comments containing spam be handled/flagged?
9
Help center update needed for comment flagging
209
Comments asking for clarification or an MCVE are not rude/abusive
120
When is a comment hostile or unfriendly? (Educating newer users how to flag comments)
11
Why was my custom comment cleanup flag declined, although the comments were deleted?