This question is a direct result of the recent release of a Stack Overflow mobile app and the community's response to the announcement. In the course of the discussion, the community has expressed its dissatisfaction with the release and mentioned several reasons why. These include lack of updates and bug fixes to the existing Stack Exchange mobile app, duplication and reduced functionality of the new app compared to the old one, and the confusion around the need for "Stack Overflow" vs. "Stack Exchange", when the existing app appears as the top search result for either.

In the course of the discussion, I asked if we could get some specific usage statistics.

I've compiled a list of data points that I think would help everyone better understand how the mobile app is used.

For most of these statistics, I imagine that there is difference between the iOS and Android versions. It may be helpful to present that break down.

Starting with the easy to answer ones:

Compared to total downloads of the application, how often is the app utilized to post a question, answer or comment versus "just browsing"?

Lots of ways to calculate this one. An easy one is comparing the question.show and comment.submit events in our internal metrics (so please excuse the text clashing).

Comment submission is more common than question or answer creation, so I'm displaying those on the graph.

So, around 10% of the time, the app is used to create content.

What is the reputation break down of the users that are posting content?

I don't have any easy way of figuring this out for people who are posting content. The metrics I showed above are anonymized, so there's not an easy way to find "Users who are posting from mobile".

I can however, figure out the reputation breakdown for mobile users in general.

Our push notification token database has 354,840 unique Accounts worth of active push tokens in it. I took a random sampling of 10,000 of those accounts and found each of those account's top site user (if any). Then I split up the users into buckets of reputation, and here's that graph: 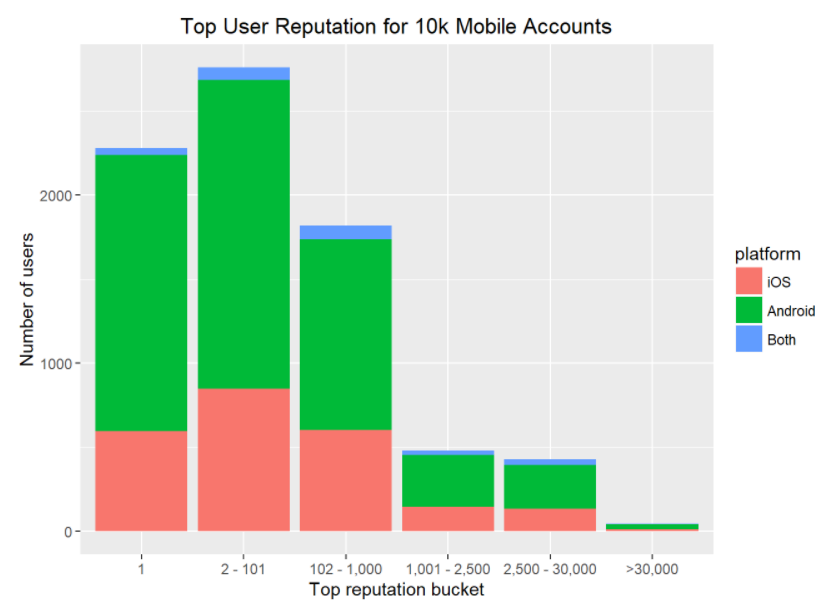 The aggregate numbers which compose that graph:

The numbers don't add up to 10,000 because there were some accounts which have logged into the app but never interacted with any of the content on any sites, so they don't have any site users.

What is the breakdown of usage across the sites on the network?

The sites are ordered on the right in order of usage, so on Android and iOS both Stack Overflow is the most used community, with Math Stack Exchange next, but Android users use Ask Ubuntu and Super User more than iOS users.

How many inbox notifications are sent to a mobile application?

For this and the related questions I don't have any answers to give you right now.

We don't have analytics around "Push notification received" in the apps, so I'd have to look at the HTTP logs of the push server but they communicate with Google and Apple via weird setups, and each HTTP call does not imply 1 push notification, so it's kind of a mess.

I'll talk to my coworkers and see if anyone has ideas on how to pull metrics around that.

Two more graphs which you didn't ask for but I think might be interesting.

From the same comment.submit and question.answered events in the first part of this question, if we sum those creation events up and count the number of unique sessions per month that included at least 1 of those events, we end up with a graph of the # of active posters using the apps.

Those graphs, for Android and iOS: 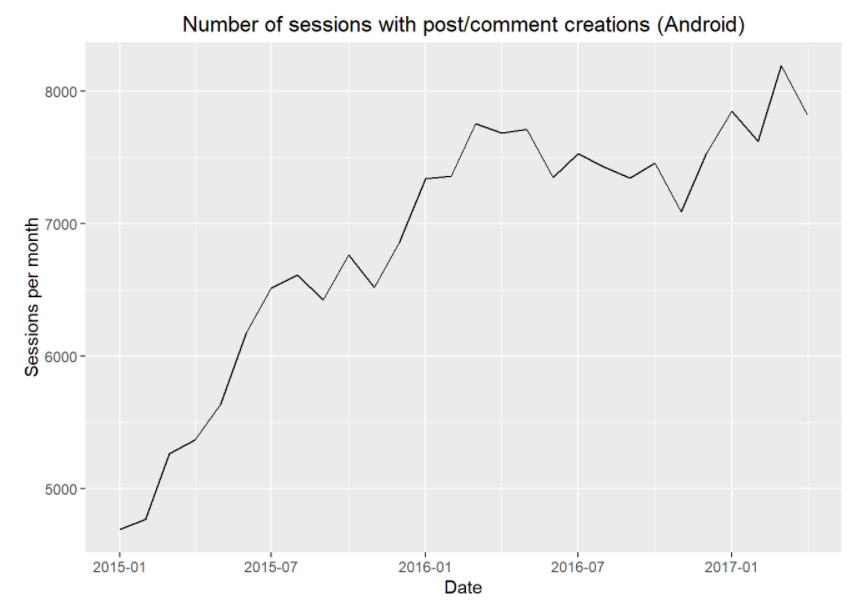 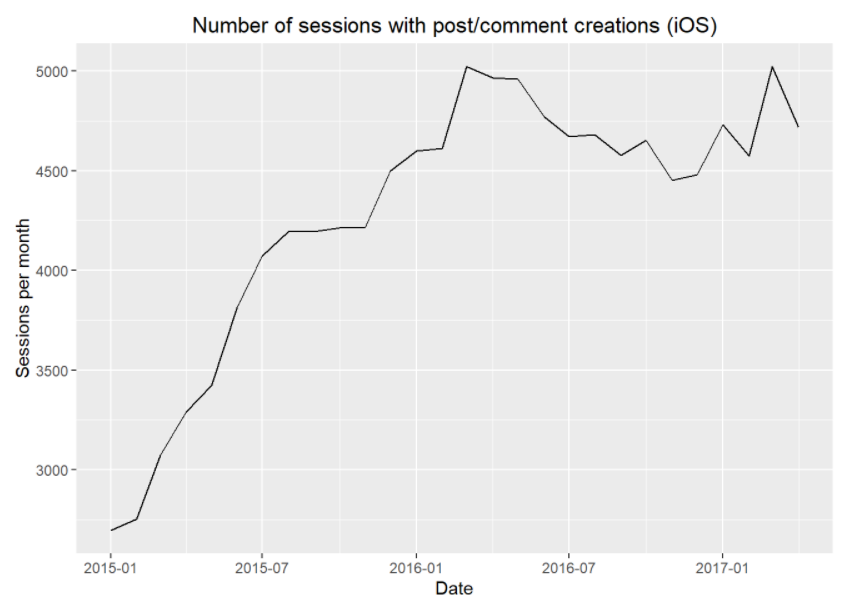 These two graphs definitely show that if we work on the apps more, the # of people using them to create content grows. The lines flattening out after Q1 2016 are definitely caused in part by lack of app updates.

The lack of a big discrepancy between the growth rates on Android and iOS makes me think that's not the biggest contributing factor though, since our iOS app received a lot more love in 2016 than the Android one did.

These two graphs (and the absolute numbers in the Y axis) both help convince me that adding more functionality and features to the Stack Exchange app wouldn't move the metrics enough to justify investing in them more (especially given our current company goals). More on that here, if you're interested.

Not the answer you're looking for? Browse other questions tagged discussion android-app ios-app .

36
A fully featured Android/iOS app
6
Links in the mobile web browser may jump to the Stack Overflow app
3
Opening a push notification from the app does not mark the inbox notification as read
42
Withdraw the Android Instant App
18
Are there usage statistics for favourites?
9
When should [web-applications] be used on Stack Overflow?