I haven't been very active with the Apple burnination, but on a whim, I spent a day in the CV queue closing apple tag questions. One day, about 40 close votes. This was on May 3rd.

Upon inquiring with other people active in the burnination about this, I was told that a few people had noticed it on themselves, but had not realized it was widespread.

Out of the boredom of somehow being up at 3 in the morning, I went through the user profiles of everyone I could find who had participated in the close vote queue, and tracked any downvotes they received during the period of May 4th through May 7th by time. 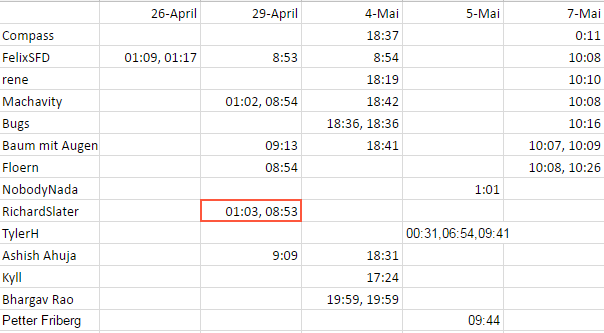 This list isn't complete, as I know a few more people were affected, and I can't access docs at the moment.

However, the amount of question downvotes clustering together minutes apart appears to be too large to be a coincidence. I also found no "unique" close vote that involved all of us, so I assume it may not be targeted at any one individual question being closed, but against the apple burnination entirely.

I'm not particularly concerned about rep, more concerned about the fact that helping clean up some tags has made some people the target of downvoting for nothing more than collaborating to clean up unsuitable questions.

This looks like someone is upset about their question or questions being closed, and is retaliating by downvoting the close voters. We've seen this before, but moderators don't have the best tools for tracking this down.

The evidence has been presented to Stack Exchange employees, and they are reviewing it. It may take a little while for them to process this, given the complexity of the situation.

Not the answer you're looking for? Browse other questions tagged discussion serial-voting burninate-system .

-4
Can we add another point to the burnination process in the FAQ?

23
Improved automated burnination
78
Make it easier to prevent new questions being added in a tag
18
I've discovered a bad tag, and am unsure what to do about it
17
When is it acceptable to post a duplicate burnination request?
27
Has the community lost interest in burnination?