I have been seeing this a few times while on Stack Overflow. The first time was on April 29th, and I had it just a few minutes ago.

I thought it was only for the "php" tag, but did browse other tags and it was showing the same error. It came back to normal a minute or two later; this for both times I encountered this.

I did not post a question about it the first time I saw this, and decided to post one since this happened to me again and there are others who experienced the same thing. I have never seen this type of error message before.

Is this a new bug or is the network undergoing pre-tests from a post I saw recently that is planned for May 3rd?

I have also seen these 2 posts on meta stackexchange:

The first was taken on April 29th. 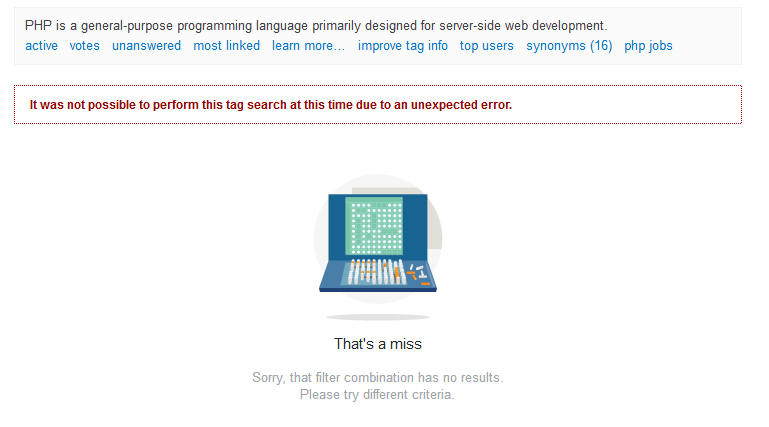 and the other about 10 minutes ago:

It just happened again now, at approximately 9:54 am, EST. 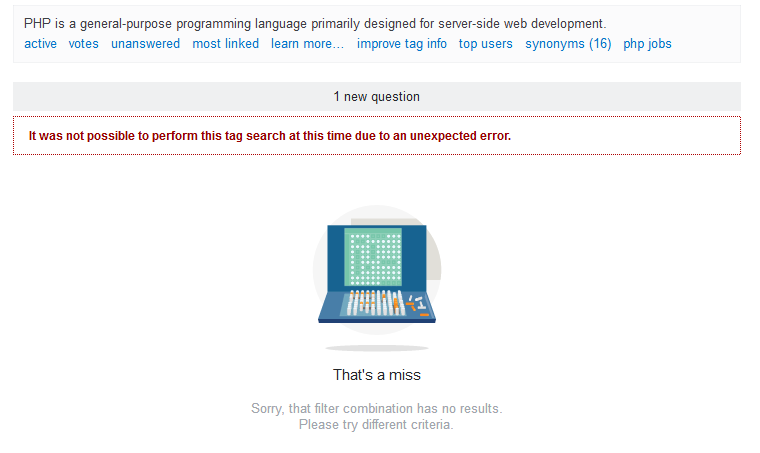 This happened again at approximately 10:33 am EST and its frequency seems to be augmenting.

This time I looked at my console and the following showed up: 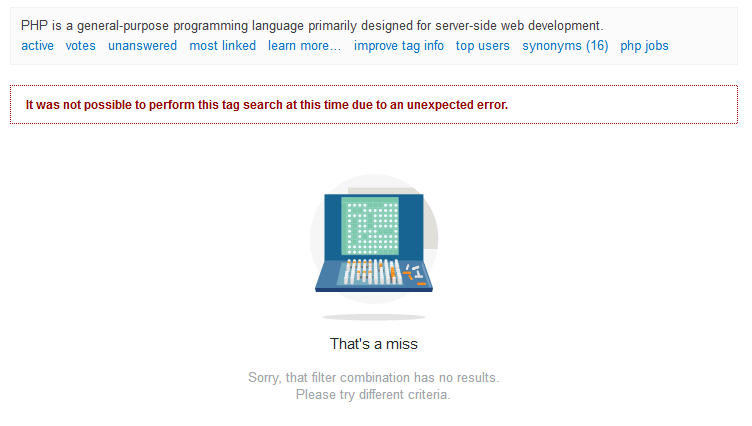 The short summary of this one is "because internet"; it turns out some annoying folks were doing annoying things specifically to be annoying, and a side-effect was disproportionate performance impact to a particular sub-system (the "tag engine"). I sincerely doubt that it was accidental or simply "oops my innocent crawler had an impact on your site? I simply didn't know...", based on the pattern of behaviour and the particular hoops they jumped through to hide their tracks. Anyway, as far as annoying bots go: that's what we call "a day with a 'y' in"; it was low-key enough not to set off any too urgent alarm bells, but it made it onto our radar, as has now been squished.

I had this happen this morning, but after a couple of reloads the problem went away. However I'm getting it again now. I can confirm the following:

What did seem to resolve the issue was simply clicking on the logo to return to the main page and then clicking back on the tag I was trying to search for - although whether this was just coincidence I do not know.

This doesn't seem to be affecting a specific tag, either. Earlier it was occurring for me on regex and reactjs and just now it was affecting css-selectors.

18
Why was the dataframe tag badge awarded another time?
52
No error message is shown in the review queue when suggesting an edit is not possible